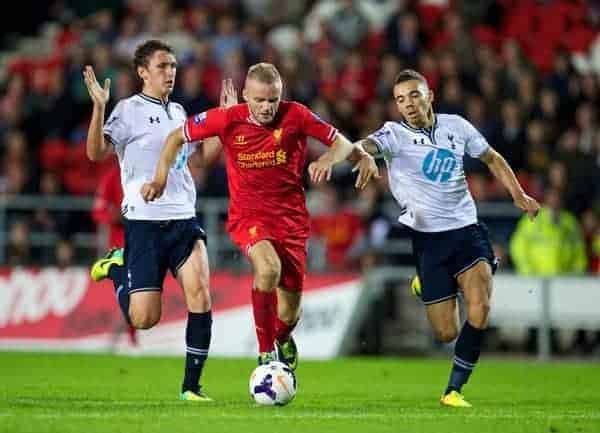 Liverpool under 21s beat Sunderland 1-0 away at Eppleton (the birthplace of Bob Paisley) in the first game of the new season. Michael Beale took charge of the young Reds for the first time.

Kevin Stewart, a versatile defender signed from Spurs was given his debut starting at left-back and Lawrence Vigoroux, the Chilean goalkeeper who was signed from Spurs following a trial last season was on the bench.

Liverpool U21 started with a 4-2-3-1 formation with Kris Peterson up top, following his impressive performances with the first team in pre-season, where he notched two goals and also travelled with the squad to the United States on tour.

Ryan McLaughlin and Sheyi Ojo were on the right and left wings respectively, with Cameron Brannagan as the ’10’ playing in front of Jordan Rossiter and Jordan Lussey.

Kevin Stewart and Connor Randall were the fullbacks for the night, with Lloyd Jones, the skipper and Jordon Williams being preferred for the centre-back spots. Wales U21 international Danny Ward was in goal.

The first half was rather dull and both sides could only create half-chances. Liverpool pressed well down the right with McLaughlin impressing in particular. The centre-back duo of Williams and Jones looked assured as well, and Rossiter and Stewart showed composure beyond their years.

Both sides struggled to string five passes together and the game was all too stop-start. For Sunderland, Cabral was a real force in midfield.

New under 21 coach Michael Beale, who replaces Alex Inglethorpe this season, made a tactical change at half-time with Ryan McLaughlin and Sheyi Ojo swapping wings. Kris Peterson also moved a bit towards the left creating more space for Brannagan to run into. The second half was much more intense and both sides showed real effort and determination to win the game.

Peterson, Ojo and McLaughlin ran at defenders and consistently beat them with consummate ease; while Ward responded brilliantly each time he was tested, as well as showing some great distribution.

Harry Wilson was introduced around the hour mark and it was a welcome return for Samed Yesil, who had injured his ACL twice within a span of 18 months. There were some teasing efforts from Peterson and McLaughlin, which were brilliantly dealt with by Sunderland‘s young Polish goalkeeper Stryjek.

It was only in the 91st minute that the star of the show, McLaughlin, hit a powerful shot into the bottom right corner of the goal to win the game for the young Reds.

My Man Of The Match was Ryan McLaughlin without a doubt. He was immense going forward all game. #LFCu21s.

All in all, the match was a terrific run-out for the players, who demonstrated very good skill, determination, pressure, aggression and contributed enormously defensively to win the game and probably deserved more than just a 1-0 scoreline.