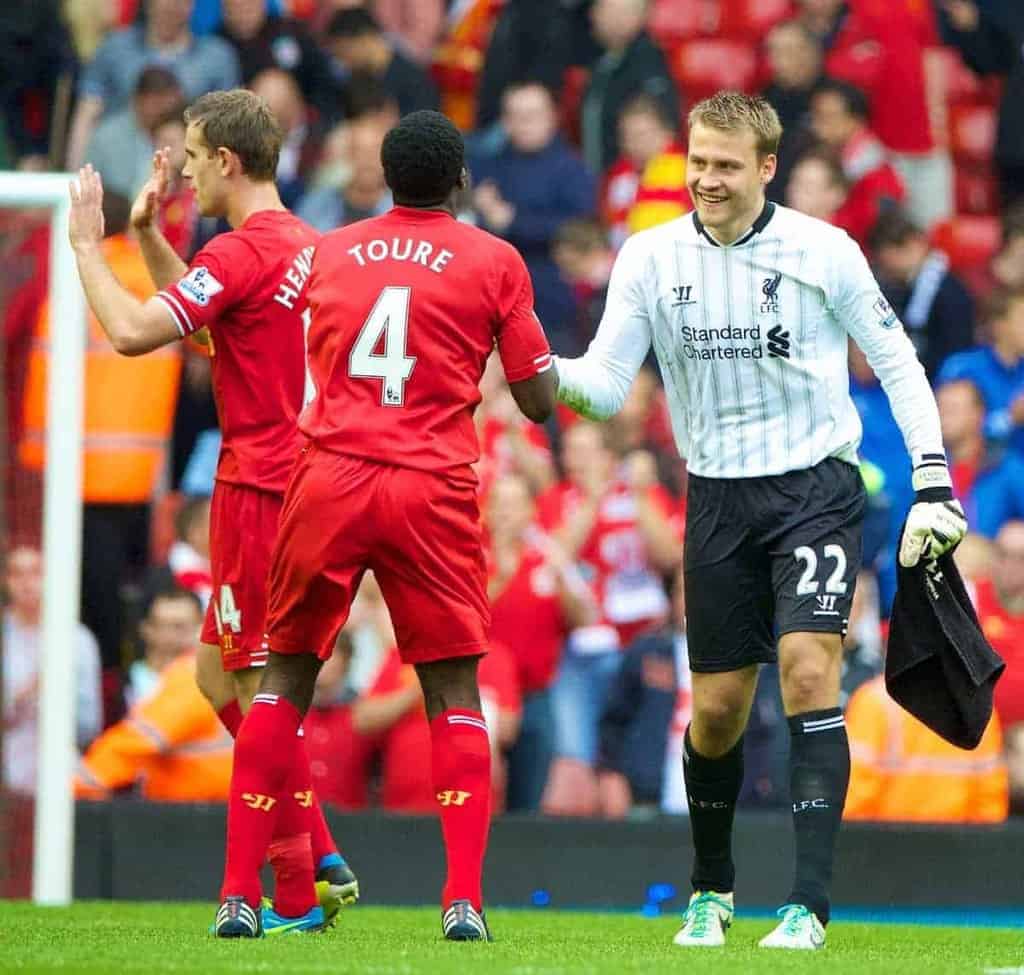 Liverpool opened their campaign at home to a stubborn Stoke side last season, and it was one of Brendan Rodgers’ new signings who would end up being the hero on the day.

Daniel Sturridge got his season off and running with a terrific stoke eight minutes before half-time, and it put the Reds in total control.

With the drifting towards a 1-0 win, Daniel Agger’s handball after 88 minutes gifted the visitors a chance to draw level from the penalty spot.

Simon Mignolet, signed from Sunderland that summer, expertly denied Jon Walters, however, amid scenes of ecstasy at Anfield, and they held on for the win. The momentum that save gave Liverpool was huge, and they went on to finish second. Rodgers’ first Premier League game in charge of Liverpool was an absolute disaster, on a day in which everything seemed to go wrong at the Hawthorns.

Despite enjoying the better of the first-half, the Reds just couldn’t finish their chances, and Zoltan Gera’s thunderous strike gave West Brom the lead at the interval.

In the second-half, Agger was sent-off for bringing down Shane Long in the box, and although the Irishman missed the spot-kick, Peter Odemwingie scored from the spot soon after, following a foul by Martin Skrtel on Long.

Romelu Lukaku put the icing on the cake for the hosts, completing a miserable afternoon for Liverpool.

Then manager Kenny Dalglish had spent big in the summer of 2011, bringing in the likes of Jose Enrique, Jordan Henderson, Charlie Adam and Stewart Downing, and much was expected as the Reds hosted Sunderland at Anfield.

Luis Suarez blazed an early penalty over the bar, after he was fouled by former Manchester United man Kieran Richardson, but he headed home Adam’s free-kick soon after to give Liverpool the lead after 12 minutes.

Again they were punished for a lack of ruthlessness, however, as Sebastian Larsson’s brilliantly taken volley after the break earned his side a point.

Roy Hodgson’s first league game as Liverpool manager, in what was a nightmare spell on Merseyside for the current England manager, ended in heartbreak after a gutsy display against Arsene Wenger’s side.

Joe Cole, making his Reds Premier League debut, was sent-off in the first-half after a reckless tackle on Laurent Koscielny, but despite their numerical disadvantage, David N’Gog’s terrific strike in front of the Kop put Liverpool ahead just a minute after the interval.

Hodgson’s men bravely hung on until the dying moments, when Pepe Reina fumbled the ball into the net after Marouane Chamakh’s header had come back off the post.

Following Liverpool’s superb season in 2008/09, they were many peoples tips to win the Premier League under Rafa Benitez in 2009/10. Their campaign did not start well, however.

The home side wasted numerous chances to open the scoring- former Red Robbie Keane was the biggest culprit- before Benoit Assou-Ekotto rifled an unstoppable shot past Reina after 44 minutes.

Although Steven Gerrard converted a penalty early in the second-half, following a foul on new signing Glen Johnson, they were behind again minutes later.

Sebastian Bassong headed home Luka Modric’s free-kick to make it 2-1, and it stayed that way until the final whistle. Liverpool would end up finishing the season in 7th place, and Benitez left the club by mutual consent because of it.

What is your greatest opening day memory? Let us know in the comments section below.