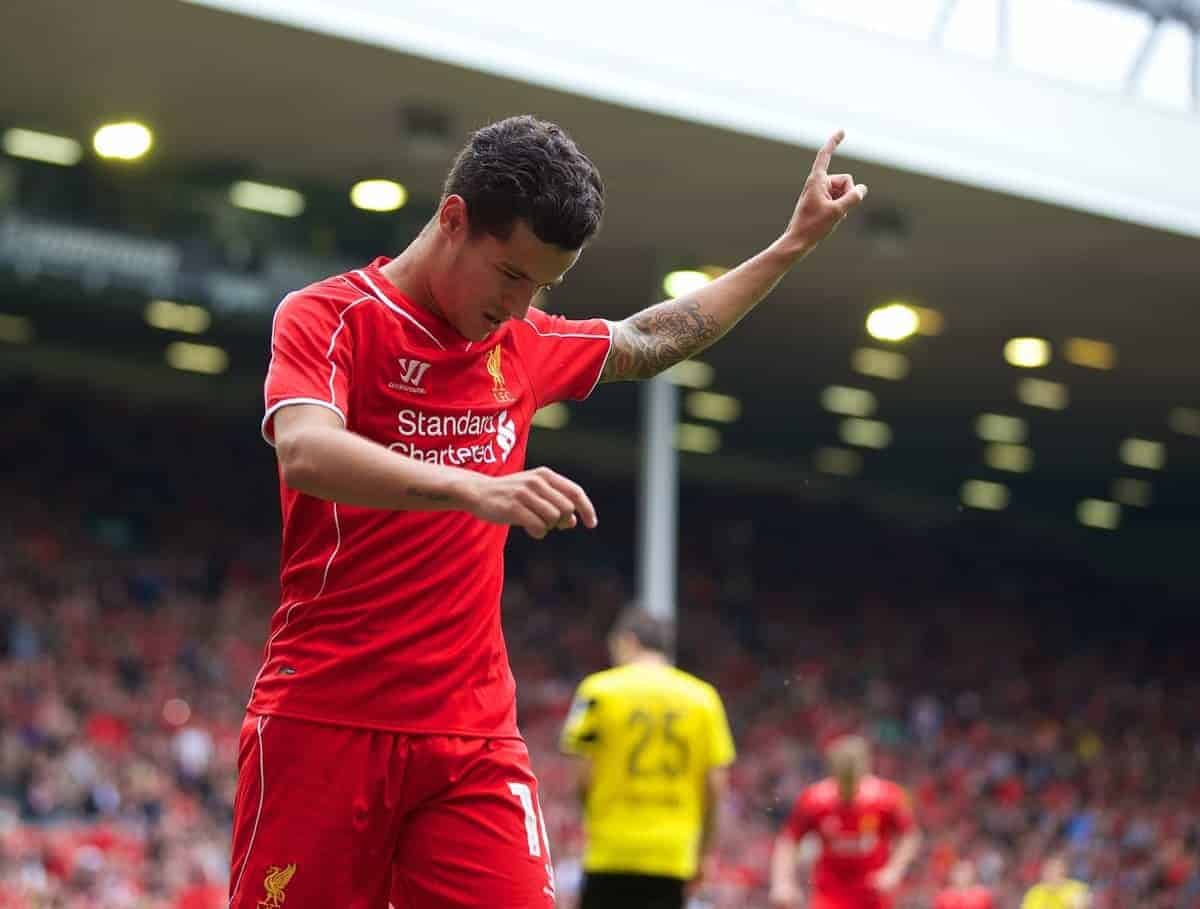 Philippe Coutinho‘s failure to make Brazil’s World Cup squad baffled many, but his performances for Liverpool this summer, and hopefully beyond, are proving how much the Reds are benefiting from it, writes Henry Jackson.

Luiz Felipe Scolari’s decision to omit Philippe Coutinho from Brazil’s 2014 World Cup squad was met with surprise by many neutrals, and total shock by Liverpool fans.

He had the creative genius the Selecao were crying out for, and he had finished the season in inspired form for the Reds.

His performances in pre-season for Liverpool – aligned with Brazil’s poor showing in attack – has made Scolari’s decision look even poorer.

Benefitting from a full pre-season, the 22-year-old has been in mesmerising form; opening up defences, dribbling past players and producing touches most of Brazil’s disappointing squad could only dream of producing.

Although as Liverpool fans we were all willing Coutinho to represent his country on the biggest stage possible, his summer off now looks as though it could be a huge blessing for Brendan Rodgers.

Many players often suffer World Cup hangovers, with some barely even returning to their respective squads until the eve of the new season. The likes of Sergio Aguero, Pablo Zabaleta, Per Mertesacker and Mesut Ozil, for example, are unlikely to even make the opening day of the season such is their lack of match fitness.

Coutinho has featured right from the start of pre-season, however, and looks as fresh as a daisy.

His performance in the 4-0 victory over Borussia Dortmund on Sunday was absolutely sensational at times, and was enough to make us all forget about Luis Suarez. Rodgers understandably waxed lyrical about his display:

“His ability is just magical. His ability to get out of tight situations, his view of the game. That’s his best position too — playing between the lines, he tempts defenders out.

“You saw that with the ball he played around the corner for the first goal. It’s about sustainability with him now. He’s lit up this country with his quality. We are now going on to a big stage in Champions League and he will have chance to show that there, too.”

Although Dortmund was his finest performance of the summer, he also excelled on the US tour, forming a mouth-watering on-pitch relationship with Raheem Sterling and generally looking the best player on the pitch in almost every match.

GOAL!!!! 3-0. Fine finish from Coutinho, who is wreaking havoc here this afternoon

Another reason why the former Inter Milan star’s freshness is so vital to the Reds is their busy schedule this season.

Champions League football is returning for the first time since the 2009/10 campaign, and high-intensity games will be coming thick and fast.

Coutinho is undoubtedly one of Liverpool’s most important players now, if not the most important, and while Rodgers will understandably rotate his squad throughout the season, the 22-year-old needs to be involved the most. Tiredness should be no major issue with him.

In fact, the squad as a whole have not exactly suffered relentless summers of football with no break. The English stars were back home before the World Cup had even got going- the same applies with Dejan Lovren– while the likes of Martin Skrtel, Joe Allen, Lazar Markovic and Emre Can didn’t even go to the tournament.

The risk with Coutinho is that he ends up being overused to the point that his form starts to suffer around the midway point of the season.

There will be games when Rodgers has to give him a breather- relatively straightforward home league matches, for example- and the ever-improving depth in the Reds’ squad should mean the creative maestro can recharge his batteries for another exhibition of footballing brilliance in the next game.

Despite the loss of Suarez, there is plenty to be extremely positive about going into the new season, not least the form of Philippe Coutinho.

We were all intelligent enough to realise he should have walked into Brazil’s squad this summer; it’s just fortunate for Liverpool that Scolari wasn’t.