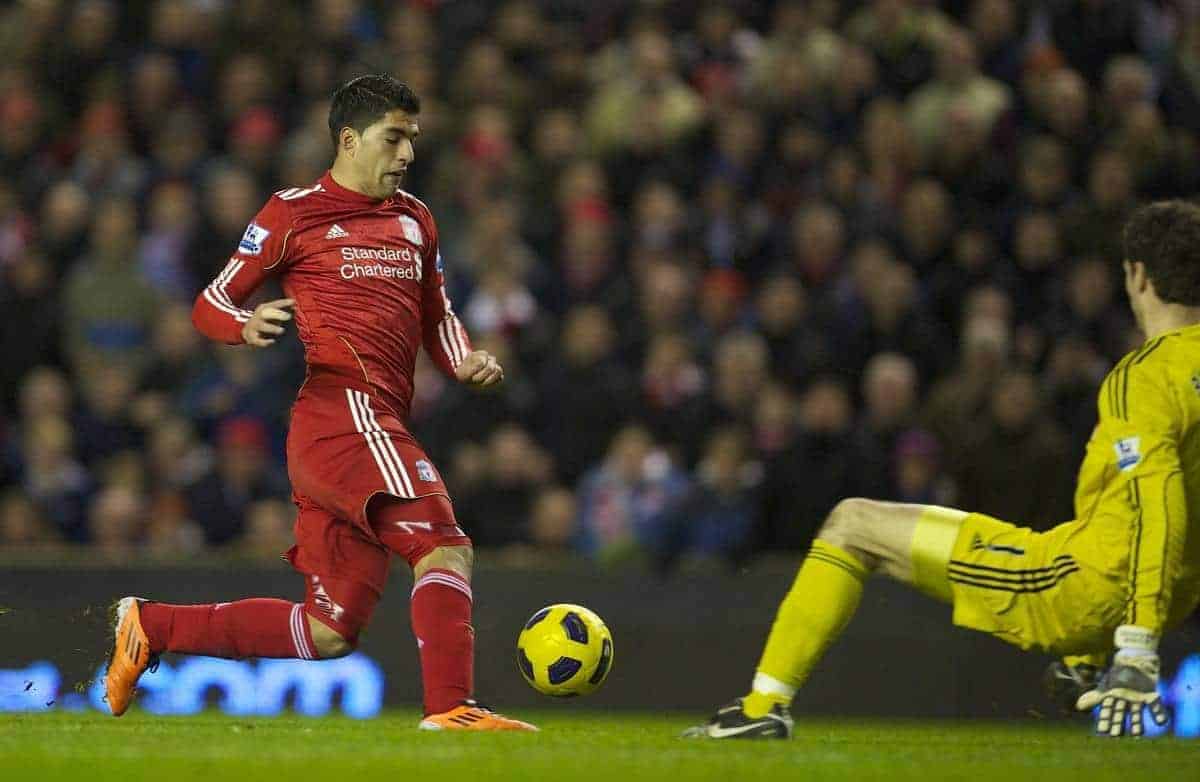 Four Liverpool new signings are expected to make their Anfield debuts in Saturday’s match with Aston Villa. We take a look at some of the most eagerly-anticipated Reds home bows over the last 20 years, as well as assessing this weekend’s potential debutants.

Brendan Rodgers’ Liverpool side face Aston Villa on Saturday, and they aim to win their third Premier League match in four attempts so far this season. Wins over Southampton and Tottenham have been sandwiched by a disappointing loss at Manchester City so far.

The second Anfield game of the campaign is likely to see a number of home debuts for several Reds stars, and there has been a buzz and anticipation all week because of it.

Mario Balotelli is probably the player that the majority of fans are looking forward to seeing, following an effective first appearance in a Reds shirt in the 3-0 victory away to Spurs. The 24-year-old will lead the line in the absence of the injured Daniel Sturridge, and will be raring to go. Much is expected of the former City man, and he is the type to deliver when called upon.

Alberto Moreno enjoyed a magnificent performance against Spurs, with his superb solo effort sealing a highly impressive 90 minutes. The young left-back’s display left many hailing him as Liverpool’s best full-back since John Arne Riise, and his first match on Merseyside should be exciting. He is a guaranteed starter against Paul Lambert’s side.

Adam Lallana has endured a very frustrating few months at Liverpool, after suffering a knee injury in pre-season, but there is every chance he will start against Villa.

The 26-year-old is competing with Joe Allen for a starting berth in midfield, and he will be hungry to show the fans what he is made of after signing for big money from Southampton. While some feel he is overvalued, its easy to forget he was voted as one of the top six players in the Premier League last season.

The fourth and final possible home debutant on Saturday is Lazar Markovic, although he is the least likely to start proceedings. The 20-year-old has been mainly used as a substitute so far this season, but whenever he has been introduced he’s looked a huge talent.

The former Benfica man has the ability to light up Anfield on Saturday, endearing himself to the Reds faithful further in the process. With Rodgers likely to opt for a 4-3-3 formation instead of the 4-4-2 diamond, it does enhance Markovic’s chances of playing from the start.

The quartet will all be dreaming about how their Anfield debuts will pan out on Saturday, and there is every chance one could play a defining part in the game.

Since the Premier League‘s inception in 1992 there have been numerous other stars whose Anfield bows have been met with great excitement and expectation. The end results have been very mixed.

Collymore joined Liverpool from Nottingham Forest for a then British record transfer fee of £8.5m, and much was expected of the enigmatic Englishman, who had become a hero at the City ground.

His home debut for the Reds came against Sheffield Wednesday in August 1995, and the then 24-year-old did not disappoint. He scored the only goal of the game, twisting and turning 30 yards from goal before firing a sensational effort into the back of the Anfield Road net.

He may never quite have hit the heights many expected of him in the end, but that debut goal will never be forgotten.

When Diouf signed from Lens in the summer of 2002 he was regarded as one of the most exciting African footballers around. A terrific 2002 World Cup in Japan and South Korea for Senegal further enhanced his reputation, with many tipping him to become a Liverpool superstar under Gerard Houllier.

Diouf’s Anfield bow came against Southampton in the Reds’ second game of the 2002/03 campaign, and he was the undisputed hero on the day. He scored twice in a 3-0 win, and more than lived up to the pre-game hype.

Unfortunately his Liverpool career proved to be extremely poor in the end, with inconsistent form and unacceptable behaviour- he infamously spat at a Celtic fan during a UEFA Cup clash in 2003- proving to be his downfall.

The signing of Kewell was seen as an unbelievable coup back in 2003. The Australian legend had been a superstar at Leeds, and had turned down more lucrative offers from some of Europe’s biggest clubs in order to join Liverpool. He was seen as the man to finally eradicate the left side of midfield issue that had plagued the Reds since John Barnes was in his prime.

His first appearance at Anfield proved to be a forgettable one, both in terms of Kewell and the team. A late 2-1 loss to Chelsea, who had recently been taken over by Roman Abramovic, was extremely tough to take, and Kewell had a quiet afternoon in general.

That game epitomised Kewell’s Liverpool career as a whole, with injuries and unpredictable form meaning Anfield never saw him at his brilliant best during his five years at the club.

The return of Fowler to Liverpool in January 2006 was met with incredible joy by Liverpool fans around the world. Famously nicknamed ‘God’, he had gained legendary status for his exploits between 1993 and 2001, and now Rafa Benitez had bought him back on a short-term basis.

He came on as a substitute against Birmingham to make his first Anfield appearance since returning, receiving an unforgettable ovation as he entered the fray. Fowler’s evening nearly had a fairytale ending, but his acrobatic last-gasp effort in front of the Kop was ruled out for offside. It robbed Anfield of one of its truly great moments, and would have been the winning goal.

Although his second spell at the club was not as memorable as the first, it was still wonderful to see him back in a Liverpool shirt again. Liverpool had been crying out for a world-class striker during Benitez’s first three years at the club, and the purchase of Torres in the summer of 2007 would prove to be a masterstroke.

The then 23-year-old, dubbed ‘El Nino’ by fans of former club Atetico Madrid- he was seen as a legend there, having been named captain at the age of just 19- took little time to announce himself in front of his new supporters, and it was Jose Mourinho’s Chelsea who were on the receiving end.

Steven Gerrard’s pass found the Spaniard, who shifted the ball effortlessly past Tal Ben Haim before sliding a terrific finish past Petr Cech. Although the game ended up finishing 1-1, it was clear to see that the Reds now had one of the world’s truly great strikers in their ranks.

On transfer deadline day in January 2011, Torres was sold to Chelsea for £50m just hours after Liverpool had signed Carroll for a then British record fee of £35m. The former Newcastle man’s price tag led to a huge amount of coverage and interest regarding his Reds debut, particularly as he was injured for a while prior to it.

His first Anfield appearance came from the bench against Manchester United, with Kenny Dalglish‘s side 3-0 up and Anfield joyous. His first touch of the ball was a typically towering header, and although it sailed comfortably into the hands of Edwin van der Sar, it was met by a huge cheer.

In hindsight, the hype got the better of most of us and Carroll was never really good enough to become a Reds star, and he moved to West Ham in the summer of 2013. The signing of Luis Suarez might not have been might yet with quite the delight that some may believe today- the fact that Carroll signed on the same day, and for bigger money, saw to that- but he was still seen as a very exciting purchase who had wonderful ability at his disposal.

‘El Pistolero’ came on as a second-half substitute against Stoke in February 2011, and it took him just 16 minutes to register his first goal for the club.

Having been sent clean through on goal, the Uruguayan star rounded Asmir Begovic before his slightly under-hit effort just made its way into the back of the Kop net.

It was a moment to treasure for those witnessing it at Anfield, and over the next three and a half years Suarez would go on to become one of the most gifted players ever to wear a Liverpool shirt.