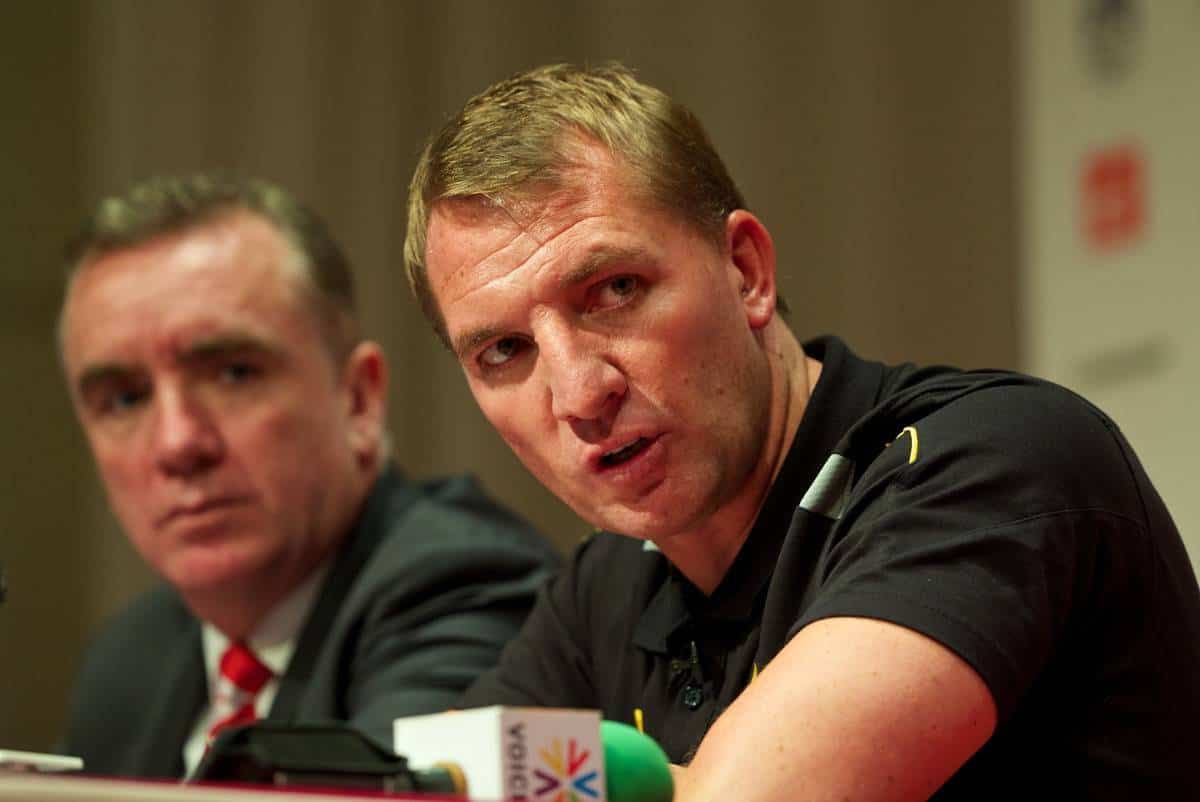 A hectic but productive transfer window for Liverpool came to an end at the 11pm deadline on Monday night. Ben Twelves rounds-up the complete arrivals and departures that took place at Anfield during the historic summer.

This summer’s transfer window was always going to be a significant one in the history of Liverpool Football Club. After last season’s dramatic title challenge, it was essential that the club continued improving the squad at Brendan Rodgers’ disposal and didn’t repeat the errors of 2002 and 2010.

Heading into the summer we all knew the chances of keeping Luis Suarez were slim. The task was therefore about spending the substantial fee received for the Uruguayan and healthy transfer budget already available wisely, to improve squad depth with quantity and quality to allow the team to compete in all competitions.

Rodgers and the club’s Chief Executive Ian Ayre didn’t hang around. Targets were quickly identified and work to recruit those desired commenced swiftly.

First to arrive was Rickie Lambert, who secured a surprise move to his boyhood club from Southampton for a small fee of £4 million. It’s a move that’s been widely viewed as clever business – having an experienced and proven goal-scorer on the bench, who’s as happy to be a back-up option as he is to be at Anfield.

German powerhouse, Emre Can, was next to follow as he joined from Bayer Levekusen for a remarkably cheap fee of a reported £10 million. The versatile midfielder entered Anfield with rave reviews from former Reds captain and Leverkusen boss Sami Hyypia, who said upon his arrival that “Liverpool fans will love him.”

A transfer for Adam Lallana finally materialised for £22millon after weeks of speculation and he was quickly followed by the £20 million capture of the explosive Lazar Markovic from Benfica. Both players have added quality options in the final third, and will allow for rotation and flexibility in forward positions with Philippe Coutinho, Raheem Sterling and Jordan Henderson.

Rodgers continued his raid of Southampton, this time paying £20 million for Croatian centre back Dejan Lovren, who’s been brought in to provide leadership defensively that the Reds missed last season. The former-Lyon man didn’t hold back in forcing a move to Merseyside, declaring that “my head is already at Anfield” a full three weeks before his transfer was finalised.

The club continued with the ‘look after the future now’ approach, and 19-year-old Belgian World Cup star, Divock Origi signed for £10 million from Lille –  and was immediately loaned back to the French side to continue playing first team football. More shrewd business followed with Javier Manquillo arriving on a two year loan from Spanish champions Atletico Madrid, with a view to a permanent deal if all goes well for a measly £5 million. Quality was what Rodgers wanted and it continued to arrive. The long pursuit of talented left-back Alberto Moreno reached a positive conclusion and it was worth the wait having picked up the pacey 22-year-old for a bargain sum of £12 million.

Good things come to those who wait, and this was certainly the case as Liverpool’s long and patient pursuit of another talented striker ended with the exciting signing of Mario Balotelli for a relatively cheap price of £16 million – taking Liverpool’s summer spending to around £117m.

Early summer reports indicated that the Liverpool boss was prepared to oversee a mass exodus as he reshaped his squad, and speculation mounted over the futures of fringe, squad and ageing players at the club.

But firstly, the inevitable happened on 16th July as Suarez departed to join Barcelona for £75 million – a club record fee received for a single player.

Academy graduate Connor Coady was the first of the squad players to depart, and he joined Championship side Huddersfield Town permanently for a reported fee of £375,000.

With heavy hearts and thankful for the memories, Liverpool waved goodbye to charismatic goalkeeper, Pepe Reina after nine years on Merseyside. The Spanish stopper joined Bayern Munich in a deal worth £2 million and he penned a heartfelt letter to Reds fans upon his inevitable departure.

A second academy product left Anfield as Martin Kelly moved to Crystal Palace for £2million in search of progressing a career that’s been hampered by injuries to date. Kristoffer Peterson followed with a permanent move to FC Utrecht and Jack Robinson joined QPR for £1 million on a four-year contract, then was immediately loaned out to Huddersfield.

Another significant departure two days before the transfer deadline came in the shape of Vice-captain Daniel Agger’s exit to Brondby for £3 million after eight years at Liverpool, and like Reina the Danish international too produced a humble message as he left, showing his class.

Krisztian Adorjan was the clubs’ only permanent exit on Deadline Day – as Fabio Borini failed to agree personal terms on moves to Sunderland and QPR – and Liverpool recouped around £84.3 million in sales this summer.

Spanish duo Iago Aspas and Luis Alberto headed home as they both found loan moves to Sevilla and Malaga in search of first team football.

Tiago Ilori and Divock Origi also moved to the continent with season-long loans agreed with Bordeaux and Lille respectively and under 21 centre-back Rafa Paez joined Italian Serie B side Bologna also until the end of the campaign with a view to a permanent deal.

If you missed it earlier, #DCFC have signed @IbeJordon on a season-long loan deal from @LFC: http://t.co/wh7H0yQhCU pic.twitter.com/vNoI06LtJD

Andre Wisdom sealed a fine opportunity to continue his development with a loan to West Brom and fellow first-team hopefuls Joao Teixeira and Jordon Ibe joined Championship sides Brighton and Derby County with Brad Smith linking up with League One side Swindon Town.

Sebastian Coates began Liverpool’s deadline day business becoming the first to leave as he signed for Sunderland on a season-long loan and the days’ action was completed 20minutes before the deadline as Oussama Assaidi re-joined Stoke in a season-long move for £1 million.

The club boosted the academy squad with the additions of Chilean goalkeeper Lawrence Vigouroux and defender Kevin Stewart from Tottenham – both of whom worked with the club’s’ Academy Director Alex Inglethorpe at Spurs previously.

However, Michael N’goo’s time at Anfield came to an end and he joined Scottish side Kilmarnock on a two year contract, and Villyan Bijev, Armin Hodzic and Jakub Sokolik all found moves to Slavia Sofia, Dinamo Zagreb and Yeovil Town respectively.

Elsewhere, Yalany Baio, Stephen Sama, Yusuf Mersin and Craig Roddan were all released following the expiry of their contracts.

Happy? I am. Still think there's room for improvement in the next few windows in terms of defensive midfield. #LFC pic.twitter.com/K7I7Vyw3O5

With the overhaul of the squad complete for now, all that’s left is to perform on the pitch.