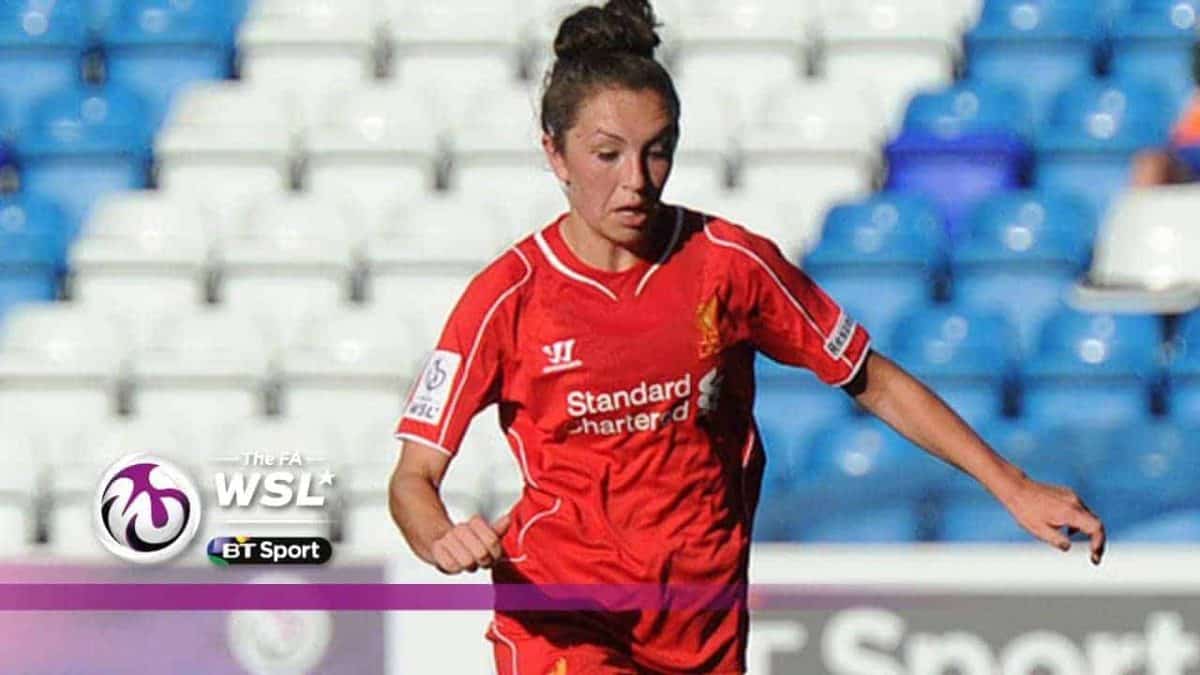 Heather Carroll provides her monthly review of the LFC Ladies, who sit second in the FAWSL – two points behind Chelsea.

Due to the U20 Women’s World Cup taking place in Canada, August has been a relatively quiet month for Liverpool Ladies, seeing just two league games. With wins in both the reds have edged closer to the top of the table and currently sit 2 points behind leaders Chelsea Ladies, Birmingham City are in 3rd 1 point behind Liverpool yet with 2 games in hand.

With every game now a must-win if Liverpool Ladies are remain in the race to retain their league title, this top-of-the-league clash with Chelsea provided Liverpool supporters with the best 45 minutes of football from the season so far.

During the first-half the reds were simply unstoppable, pressing forward from the opening whistle with Gemma Davison and Lucy Bronze wreaking havoc on the right wing. Chelsea defender Laura Bassett couldn’t handle Davison’s trickery in the 18-yard box, tripping the winger and conceded a penalty which Davison duly stepped up to slot past the keeper.

Lucy Bronze scored the second and final goal of the game shortly after, ending a powerful run forward from right-back with a quick exchange with Davison on the edge of the area and blasting the ball into the back of the net.

Chances in the second-half were limited for both sides, Liverpool standing strong to comfortably see out the win.

Notts County are a tough side to play against, well organised and content to let the opposing team do all the work while they sit back and wait to capitalise on a mistake.

Jess Clarke has been in top form for Notts in 2014, scoring 12 goals in all competitions. Gemma Bonner produced one of her best performances in a red shirt to prevent her from adding to that tally, as the winger attacked the reds defence from the left.

Liverpool struggled to find a rhythm in the first-half, forced into an early substitution with Becky Easton going off injured. Amanda DaCosta replaced the defender, Fara Williams stepping into the centre of defence.

With 15 minutes to play Matt Beard brought on Katie Zelem, Liverpool’s promising young midfielder had already produced a number of eye-catching displays this season and scored the winner with her first touch. Gemma Davison providing the cross for Zelem to volley home her third goal of the campaign.

The reds almost had a second when the referee awarded a penalty, Natasha Dowie was poised to take the set piece before the official bizarrely changed his mind and the game finished 1-0.

As mentioned the U20 Women’s World Cup has been taking place this month in Canada, Liverpool trio Martha Harris, Katie Zelem and Ellie Stewart were all named in the England squad for the tournament.

England drew their first 2 games 1-1 with Mexico and South Korea, Harris scoring against South Korea. The final group game against Nigeria was a must-win if England were to progress from the group stages, however they fell to a 3-1 defeat despite taking an early lead through Everton‘s Nikita Parris.

England seniors fared better than their younger counterparts in August, impressively beating Sweden 4-0 in a friendly that also seen Liverpool’s Fara Williams become the most capped England player of all-time.

At the end of the month England also sealed qualification to the Women’s World Cup in Canada next year, with a 4-0 victory over Wales in Cardiff. Williams picked up her 131st cap while Natasha Dowie was an unused substitute.

On 22nd August the draw was made for both the Women’s Champions League Round of 32 & 16, with Liverpool Ladies entering the competition for the first time in their history.

Liverpool drew Swedes Linkopings FC in the Round of 32, if the reds progress they will face either Icelandic outfit Stjarnan or Russian side Zvezda-2005 Perm in the Round of 16.

Liverpool will face Linkopings FC at home in the first leg to be played 8/9th October. The return leg will be in Sweden on 15/16th October.

Liverpool Ladies now have just 4 games left of their league campaign, starting with a derby on Thursday 4th September against Everton Ladies. Although this game is away, the Merseyside clubs ground share so the match will be played at Select Stadium, Widnes.

Then on Sunday 21st September the Reds will travel to Birmingham City, who sit one point behind Liverpool at the time of writing with two games in hand.