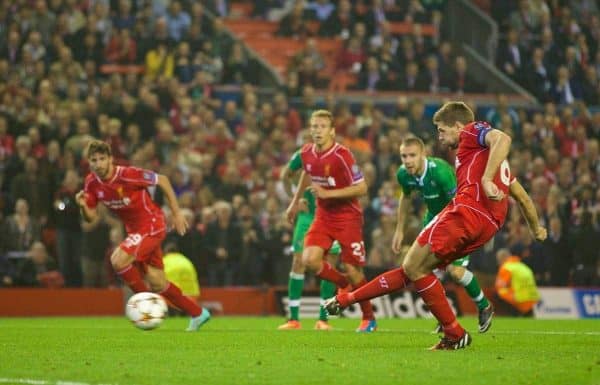 Liverpool got their Champions League campaign off to a winning start, with Steven Gerrard’s late, late penalty earning the Reds all three points. Dani Abalo’s last-gasp strike had seemingly earned Ludogorets a draw, in what was an incredible end to proceedings.

Champions League football returned to Anfield for the first time in five years, and a typically atmospheric home crowd made it an occasion to remember. The Reds were officially back where they belong, as their search for a sixth European Cup triumph got underway.

Brendan Rodgers made just one change from the side that lost disappointingly to Aston Villa on Saturday, with Raheem Sterling coming in for Lazar Markovic. The 20-year-old Serbian star was suspended, having picked up a red card in last season’s Europa League semi-final for Benfica against Juventus.

The game got off to a frenetic start, with Ludogorets showing that they were perfectly capable of springing a surprise. Chances were few and far between in the opening exchanges, however, with the Reds’ passing perhaps a little lacking in tempo and a few early nerves clearly having an effect on some.

Dejan Lovren was slightly fortunate not to concede a penalty at the other end, as the hosts continued to show they were not remotely overawed by the occasion. Balotelli tested Borjan with a tame effort, while the lively Alberto Moreno fired over.

Shortly before the break Lallana was twice denied by Ludogorets defenders, after good work from Jordan Henderson, and from the resulting corner Lovren header over.

The two sides went into the break deadlocked, in what was a tense, intriguing battle.

There were no changes from either team at the interval, as a potentially pivotal second-half commenced. Coutinho and Henderson both had early long-range efforts on goal, but neither troubled Borjan.

Javier Manquillo then wasted a wonderful opportunity to make it 1-0, but he volleyed into the Kop having been found expertly by Henderson.

The Reds took control of the game, with Sterling growing more and more prominent by the minute. There was a definite lack of sharpness about Lallana and Balotelli though; perhaps understandable given their lack of football since the World Cup.

It was still 0-0 at the hour mark, and Anfield was growing increasingly restless. Ludogorets looked a threat on the break, and had a couple of decent strikes off target.

Midway through the half Lucas and Fabio Borini came on for Coutinho and Lallana, respectively, with Liverpool changing their shape to a 4-4-2 diamond. The latter almost opened the scoring immediately, but his header was tipped over by Borjan.

Roman Bezjak then had a wonderful chance to stun the hosts, but his side-footed effort came back off the post. The match was on a knife-edge with 15 minutes remaining.

With eight minutes remaining, that elusive goal finally came. Balotelli, who had struggled throughout, finished sublimely from close-range to give his side a vital lead and truly announce himself as a Liverpool player.

An unbelievable finale to the game saw Dani Abalo make it 1-1 in stoppage time, rounding Simon Mignolet and tapping into an empty net, before Manquillo won a penalty even later in time added on. Steven Gerrard nervelessly dispatched the spot-kick to earn Liverpool a massive win.

It was a truly breathless end to a nervy evening.

Despite rumours of Rodgers opting for his favoured 4-4-2 diamond formation, he went with a 4-3-3 slightly different to the one that failed to ignite against Villa at the weekend.

Coutinho dropped deeper alongside Gerrard and Henderson, with Lallana and Sterling occupying the wide roles in support of Balotelli. The switch to the diamond in the second-half improved the Reds’ performance, and should be their first-choice system in general.