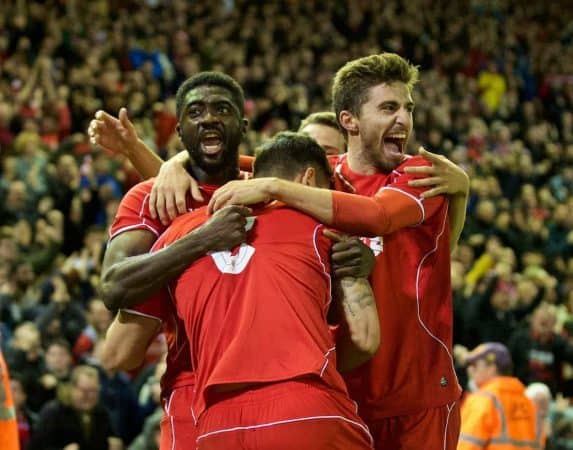 Fabio Borini produced a positive performance in Tuesday night’s Capital One Cup success over Swansea, claiming an assist in the process for the Reds’ all-important equaliser. Ben Twelves says the Italian now deserves his chance to build on his display as a result.

Liverpool’s late comeback win against Swansea on Tuesday night, thanks to goals from Mario Balotelli and Dejan Lovren, will hopefully provide the squad with the confidence and morale boost that it has so desperately needed.

The turnaround could prove to be a season-changing moment for Brendan Rodgers’ side and it came with thanks in no small part to an Italian striker; no not Balotelli, but instead Fabio Borini – who produced a tenacious and wholehearted display under the Anfield floodlights.

#LFC record this season when conceding first before tonight: W0 D0 L5
Should be a nice little confidence booster all round.

The 23-year-old was the brightest player of those looking to impress on the night – despite being deployed out of position on the right side of a ‘3’ behind Rickie Lambert – and his positive attitude and desire to make something happen in the game was refreshing to see in amongst certain players who froze under the occasion.

In the first half, Borini hounded, chased and harried opposition, while also looking to carry the fight by picking up the ball, driving forward at the Swansea back line and firing two shots at goal – both that went close to breaking the deadlock.

Borini on Swansea: "We showed that we're a very strong team, mentally. I was pleased with my own performance, too." pic.twitter.com/ulwiL4L7Nl

He looked to get in between defenders, and in behind the Swansea back line – a feature Liverpool’s static attacking play has been missing so desperately since Daniel Sturridge’s absence.

The returned loaned man certainly wanted to take his chance after being shown the exit door in the summer transfer window, and that he did. It was far from an outstanding display but it was one that showed that Italian international wants to be a success and is prepared to battle and scrap in order to give himself the best opportunity to do so.

His second half performance – while restricted to seeing less of the ball – continued with the same tenacity and work rate despite not much falling his way. When he did have possession however, his first thought was to carry it forward and try to breathe life into a deflated Liverpool attacking system. His bravery in doing so was commendable.

Borini’s positivity and endless commitment was finally rewarded five minutes from time, when it was from his outstanding cross that Balotelli arrived in the six yard box to poke the Liverpool equaliser into the Kop net. Not only did Fabio set up the goal to drag his side level, but his pin-point assist provided the catalyst for a delightful and desperately needed comeback.

86 mins: #LFC are level as Borini's superb cross from the right is turned over the line by Balotelli from six yards 1-1 at Anfield now

The former Sunderland loanee – who was Rodgers’ first signing when he took over – has certainly given the man who paid £9.7million to bring him to Anfield  a reason to give him another go.

Rickie Lambert continues to look completely lost and devoid of any goal threat while Balotelli has started his Liverpool career extremely inconstantly. But while some struggled to impose themselves, Borini tonight successfully did two jobs, in producing a solid performance himself and doing his best to spark Balotelli into life.

The former Roma man has featured as part of the squad only four times this season – failing to even make the bench in most games – but with Borini last night outperforming Lambert, who has been a substitute ahead of him this season, it could be time to switch their roles around if accommodating both can’t work.

It would be a huge shame and even a waste, for Fabio to have found some confidence from a tireless display on Tuesday, only to be cast aside again and left out of the squad for the weekend, thus undoing all the good work the Italian put in to the game.

Borini’s persistence and work rate has been Kuyt-esque at times tonight.

If Rodgers left him out, it could even be argued that it would set a real negative tone to the rest of the squad and those battling for their Liverpool careers. It risks demoralising players and flicking their work rate switches the other way, if a player knows that despite training and trying hard to impress he wasn’t going to be rewarded.

Credit must go to Fabio Borini for the way he’s trying to respond from being told he can leave in the summer, and now it’s time to show a little bit more faith in him, which in turn could create that little more confidence and transform his Liverpool career the way he had hoped after turning down a move away in order to fight for his place.

The Italian isn’t a starting option currently, but he should absolutely be included in the squad for the trip to Newcastle on Saturday, and named at least as a substitute at St James’ Park – a ground in which he has come off the bench to score at before for Liverpool.

Repeating that feat again on Saturday would be extremely welcome, Fabio.