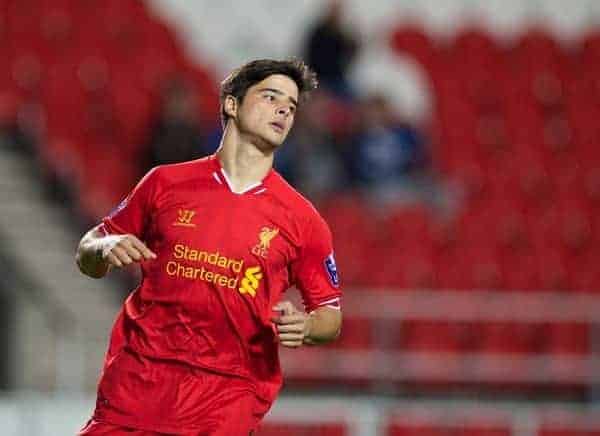 Ben Twelves rounds up how all the Liverpool loanees performed for their loan clubs in the fixtures throughout the week. The Portuguese attacking midfielder made a return to the starting team for loan club Brighton on Tuesday night – after consecutive games of being rested and left on the bench – for his sides 1-1 draw with Cardiff City.

Teixiera has created a chance every 30 mins in C'ship. Obvious step up needed, but that rate would be around most creative player in the PL

Teixeira began on the right side of a front three and produced a disappointing performance – though not in his preferred position – before being substituted in the 80th minute as Sami Hyypia’s side searched for a winner.

The 20-year-old started his second game in a week for his loan club on Saturday and completed all 90 minutes in their 1-1 draw away at Watford.

For #bhafc, Teixeira was a constant threat, Lua Lua was dangerous when he came on, Stockdale was shaky and Gary Gardner was awful.

The Reds loaned star lined up on the right side of a front three again and produced a lively performance being a constant threat throughout the match, as noted by supporters of the opposing side.

Talented youngster, Ibe, started his third match in a row for Derby, as they overcame Bournemouth with a 2-0 win on Tuesday night.

Ibe only got 45 minutes for Derby, but still completed the second most dribbles in the whole match (3) #lfcloanwatch

The Liverpool loaned star opened the match occupying the left side of a front three, and produced a lively performance before being withdrawn at half time due to suffering from a stomach bug, according to Rams’ boss Steve McClaren.

The Rams failed to build on Tuesday night’s success against Millwall on Saturday however, as they played out a 0-0 draw at the Ipro Stadium.

Ibe played 65 minutes of the game – starting on the right of a front three – and picked up his first yellow card of the season as he was booked for diving, before being substituted as McClaren altered his team as they searched for a winner.

Belgium international Origi scored his 4th goal of the season for Lille – and his third in five games -with an equalising second half penalty in their 1-1 Europa League draw away at Wolfsburg on Thursday night.

The Belgian stepped up to the take the spot kick and fired the home into the bottom left corner of the net in the 77th minute of the match, before being withdrawn 8 minutes later.

A decent result on Thursday night for Origi’s side was followed by a disappointing 3-0 defeat against Lyon on Sunday. The exciting striker started on the bench, but was thrown into the action just after half time with his side trailing 2-0, as Rene Girard turned to the Belgian for some inspiration which unfortunately couldn’t be found.

Brendan Rodgers believes Divock Origi will become a world class striker. "But we couldn't bring him in now. Part of the deal." #lfc

Spanish striker Aspas started and played 71 minutes up front for Sevilla in their 2-2 Europa League draw with Rijeka on Thursday night, and the Reds loaned man scored his first goal for the club with an excellent arrowed finish before being substituted in the second half.

He can hit a decent ball if its not a corner. Aspas scores. https://t.co/BsXlWTdZca via @vineapp

Despite scoring and producing a good performance in Europe, Aspas disappointingly dropped back to the bench for Sevilla’s league encounter against Deportivo La Coruna on Sunday – a game in which the Europa League holders ran out comfortable 4-1 winners.

The Spanish striker did come on as a substitute after 79 minutes with the game already done and dusted at 4-1.

Portuguese defender Ilori started for Bordeaux in their 1-0 defeat against Reims on Friday night, but typically after producing some promising form, the 20-year-old played only 27 minutes before having to go off after picking up what appeared to be a thigh injury.

Thank you everyone for the support x
I will be back as soon as I can!#love #support #illbeback #FCGB #LFC #YNWA

@diabate33 not yet. I'm having tests. Not long I hope

Disappointingly after some promising form, Alberto was an unused substitute for Malaga in their 2-1 home success over Granada on Saturday night.

Liverpool’s loaned defender sat out of West Brom’s unrewarding visit to Anfield on Saturday due to being ineligible to play against his parent club.

Liverpool’s tricky Moroccan winger entered the field as an early substitute in the first half against Sunderland on Saturday, replacing former loanee Victor Moses who departed injured after just 18 minutes.

Assaidi entered the field with the score already at 1-1 and played on the right of a ‘3’ behind former Reds striker Peter Crouch, producing a quiet performance as his side slumped to a disappointing defeat at the Stadium of Light.

The Uruguayan centre back missed his side’s fixture against Stoke City at the weekend through an on-going thigh injury which frustratingly continues to hamper chances of match time for Coates.

Australian international Smith was an unused substitute for Swindon in their impressive 2-1 away win against Leyton Orient and he is now set to join up with the Socceroos squad ahead of the international fixtures.

Off to Abu Dhabi with my brother @massluongo to meet the rest of the lads @socceroos ???? http://t.co/YgBNwezUTx