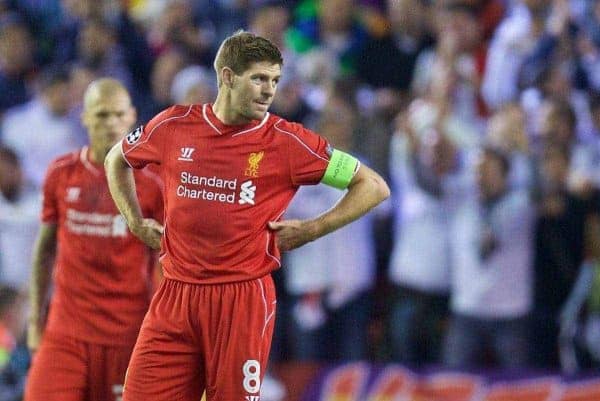 At the conclusion of the Coen brothers’ show-stopping 2013 film Inside Llewyn Davis, the titular troubadour is subject to the same vitriolic abuse that he suffered at its beginning, a brutal beating bookending a meander from New York to Chicago and back.

Midway through Davis is posed the eternal question ‘What are you doing?’ and he has no response—his exploits are devoid of purpose.

Inside Llewyn Davis lasts about the same length as Liverpool’s dismal defeat at the hands of Carlo Ancelotti’s Real Madrid did on Wednesday night, and the Anfield clash was just as cyclical.

Despite these factors, Brendan Rodgers’ side were never truly fated to defeat the current holders of the Champions League, and a gulf in class between two of Madrid’s more nuanced performers, Luka Modric and Toni Kroos, and their Liverpool counterparts underlined this.

An ever-assured backbone, Modric and Kroos provided Madrid with a composure desperately lacking in Rodgers’ Liverpool of late.

All of Madrid’s attacking talents shone at Anfield: Isco perhaps the brightest, Karim Benzema at his clinical best, Cristiano Ronaldo somehow eluded the efforts of Glen Johnson, and James Rodriguez grew into the game with verve.

However, deployed behind this four-pronged charge were Modric and Kroos, and the pair were as integral to Ancelotti’s success as their glittering colleagues.

Madrid lined up in a fluid 4-2-3-1 formation, with Benzema as lone striker supported by Isco coming inside from the left flank, Rodriguez from the right, and Ronaldo in a free role.

Kroos, Modric and Isco have the freedom of Anfield to dictate play in the centre.

Liverpool began well, with Jordan Henderson, Raheem Sterling and Coutinho in particular combining well and creating chances around the Madrid box; even Dejan Lovren looked impressive in the opening stages.

This was hallmarked by an incessant energy, but nevertheless Modric and Kroos started comfortably, gradually moving through the gears in their well-oiled passing game.

Luka Modric and Toni Kroos have completed 100% of their passes as a pair. pic.twitter.com/kPCDuSrFQw

As Madrid pushed the Reds further and further back, the influence of the pair in the final third increased, as the latter’s assist for the side’s second goal—a remarkable header from Benzema—outlined.

Along with this, Modric typically serves as the link between the pair and the Madrid forward line.

The frequency within which the Croat found Colombian playmaker Rodriguez—and vice versa—showed how the former Spurs man paired his and Kroos’ balanced possession with a decisive incision that consistently tore the Reds apart.

There was no surprise when, withdrawn on 80 minutes, the entire stadium afforded a departing Kroos with applause—this was a stand-out performance.

Toni Kroos applauded off the field by everyone inside Anfield.

Not sure I've ever seen a player make the game look so simple! Toni kroos ???

Together, Modric and Kroos finished the game with a combined passing accuracy of 95.75 per cent from a total of 185 passes, according to WhoScored.

However, with the final passing totals standing at Liverpool 510-597 Madrid, per Squawka, it’s was more the midfielders’ intelligence and composure on the ball that destroyed Rodgers’ side.

"Well what can we do?" pic.twitter.com/OvUAn9JptA

Rodgers will be incredibly humbled by this defeat, but it was no surprise: Madrid are playing at a higher level than Liverpool at this moment in time.

Hopefully this result, and his side’s waning performance, will give the manager food for thought.

Previously Liverpool boasted the personnel capable of aping this system, with Xabi Alonso effectively Kroos’ predecessor in that role at Madrid, and Javier Mascherano one of the best passers at this year’s World Cup.

Before the forlorn nostalgia begins however, there is very little chance of either of the pair returning to Anfield under Rodgers and, arguably, rightly so. But the manager should look to emulate their powers in looking forward to games such as this.

Against QPR in the recent, abysmal Premier League victory, the Liverpool midfield engine lacked composure and were overrun by an inspired Loftus Road side.

In order to dominate games again, let alone challenges of the calibre of Madrid, Rodgers’ side will need to muster this composure once more.

The midfield pivot of Modric and Kroos provides Madrid with the steady platform with which to launch their attacks, their teammates confident in their abilities.

Liverpool’s enthusiastic pressing of the first 20 minutes was admirable, but swiftly drained and the side suffered thereon.

Toni Kroos and Luka Modric are the best midfield partnership in the world. They've an amazing understanding. Absolute joy to watch.

Although far from the Madrid pairs’ talents, Liverpool are not bereft of players eager to collect the ball and continue possession (see: Joe Allen, Emre Can, Jordan Henderson), and as a former advocate of ‘death by football,’ Rodgers will be well aware of its benefits.

This is a concept currently buried in the Ulsterman’s boldness.

However, the masterful talents of Modric and Kroos will have taught Rodgers a vital lesson on the grandest occasion: Behind his side’s enthusiasm must lay some composure.

What are your thoughts on Liverpool’s Champions League loss to Real Madrid? Let us know in the comments below.