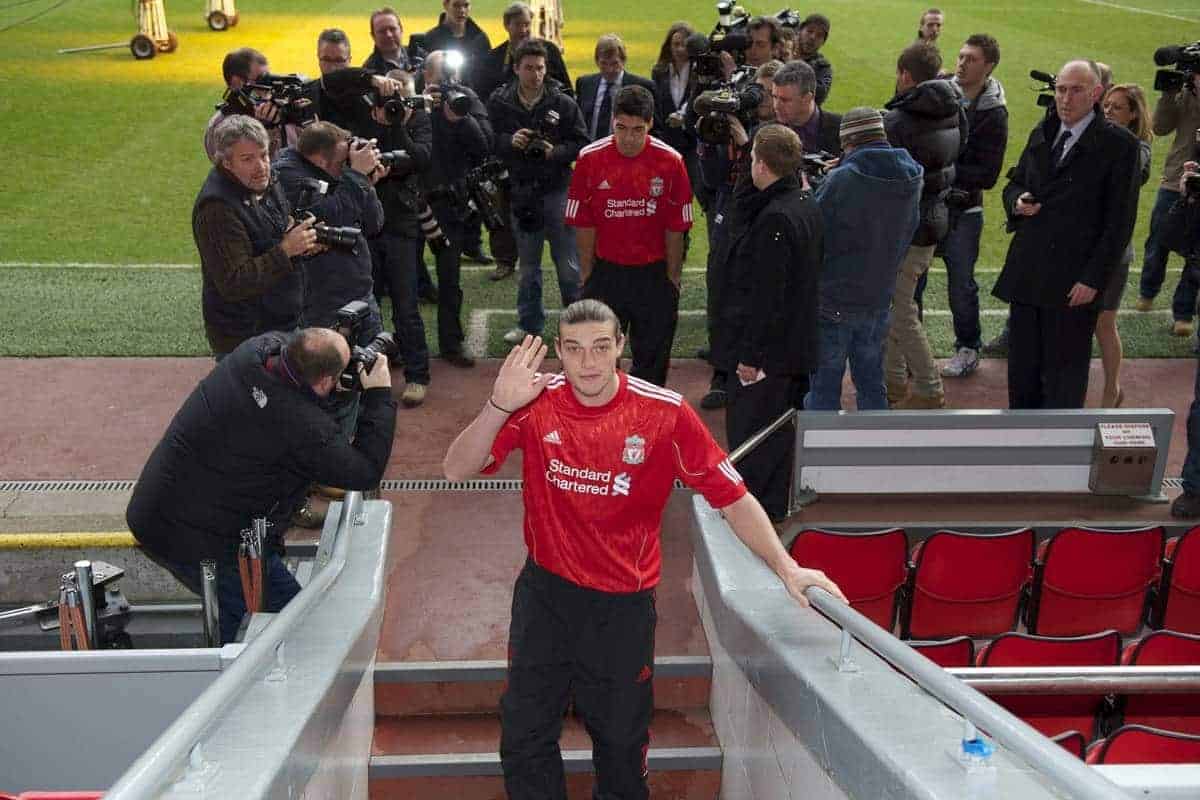 Liverpool face Newcastle at St James’ Park on Saturday lunchtime, and Henry Jackson selects the best XI to have played for both clubs.

Over the years, there have been some outstanding players to have represented the Reds and the Magpies (and some not so outstanding), contributing greatly to the success of both.

This combined XI is made up of players who did something of note for both teams – Ian Rush, for example, scored just two goals for Newcastle so doesn’t make the cut. Danny Guthrie is another who can’t force his way into the side despite a modest four years on Tyneside after leaving Liverpool. Craig Bellamy narrowly misses out on a place in attack.

This XI is desperately short of defenders so we’ve gone for a (very) attacking 3-4-3 shape – don’t worry that midfield and attack will make up for any problems at the back!

Hooper joined Liverpool from Wrexham in 1985, and in his eight years spent at Anfield he was a very able deputy to Bruce Grobbelaar in goal. He won six trophies at the club.

He signed for Newcastle from the Reds in 1993, having fallen further down the pecking order because of David James’ arrival, and spent two years at St James’ Park as an understudy to Pavel Srnicek.

Kenny Dalglish took Venison to Anfield from Sunderland in the summer of 1986. The right-back was a solid squad player as Liverpool won the 1988 and 1990 First Division title, as well as the 1989 FA Cup. He eventually left for Newcastle in 1992.

Venison spent three years in the North East under Kevin Keegan, where he won the Division One title in 1992/93.

Kennedy started his career at Newcastle, and was a member of the side that lost 3-0 to Liverpool in the 1974 FA Cup Final. The attacking left-back’s performances for the Magpies impressed Bob Paisley greatly over the years, and he joined the Reds in 1978.

He spent eight terrific years on Merseyside, cementing his place as one of the club’s greatest ever full-backs. He scored the winning goal in the 1981 European Cup Final against Real Madrid, and the decisive spot-kick against Roma three years later. Kennedy won five league titles at Liverpool, and made 359 appearances in total.

Enrique joined Newcastle from Villarreal in 2007, for a fee of £6.3m, and it was rumoured that they had beaten Liverpool to his signature. He spent four years there, and became a crowd favourite because of his decision to stay at the club despite relegation in 2008/09.

Dalglish signed him for Liverpool in 2011 but after a bright start to his Anfield career he’s now second choice to fellow Spaniard Alberto Moreno.

Having spent five years at Bayern Munich, Hamann joined Newcastle for £5.5m in 1998. He impressed hugely in the centre of the Magpies’ midfield, and a year later Gerard Houllier bought him to Liverpool for £8m.

The German was one of the Reds’ most important players for many years, playing the defensive midfield role to perfection. He spent seven seasons there, winning a cup treble in 2000/01 and the 2005 Champions League. His influential dipslay in Istanbul, in which he was introduced at half-time with Liverpool 3-0 down, will forever go down in legend. McDermott spent a year at Newcastle in 1973/74, and like Kennedy, had to witness Liverpool tear them to shreds in the 1974 FA Cup Final. Paisley liked the look of him though, and he joined the Reds in November of that year.

In his eight years spent at Anfield, McDermott became one of Liverpool’s greatest ever players. He won three European Cups, scoring in the 1977 final against Borussia Monchengladbach, and five league titles.

The goalscoring midfielder rejoined Newcastle in 1982, and he spent two years there.

Barnes is definitely an all-time Liverpool legend, and the stuff he could do on a football pitch was majestic. The brilliant winger was a key player in arguably the Reds’ most entertaining team in history, during the late 1980s, and he two First Division titles, two FA Cups and a League Cup in total at the club.

The former England star remained at Anfield until 1997, but was well past his best when Dalglish, by that point Newcastle manager, signed him for Newcastle. He spent two seasons there, before joining Charlton Athletic in 1999.

Beardsley is adored by both Liverpool and Newcastle fans alike. He was one of the trickiest, most inventive English players of the last 30 years.

He moved to Newcastle from Vancouver Whitecaps in 1983, and spent four excellent years there, forming a great partnership in attack with an ageing Keegan.

Dalglish took him to Liverpool in 1987, and he was superb. He had technical brilliance, creativity and goals in abundance, and he won two league titles in his four years.

Having spent two seasons at Everton, Beardsley re-signed for Newcastle in 1993, at the age of 32. He was still terrific though, scoring 25 times in his first season back- his partnership with a young Andy Cole was lethal- and almost captaining them to Premier League glory in 1995/96. He’s now a coach at The Magpies’ Academy.

Keegan was signed from Scunthrope by Bill Shankly in 1971, and he went on to become a Liverpool legend. The diminutive striker scored 100 goals for the Reds, many of which were in big games, and he won the 1977 European Cup and three First Division titles before joining Hamburg in 1977.

With his career starting to wind down, Keegan joined Newcastle in 1982. He scored at an impressive rate there, and helped get them gain promotion from the Second Division in 1984.

He was a hero at both clubs, and is actually criminally underrated by some.

Having come through Newcastle‘s youth system, Carroll became something of a cult figure at St James’ Park. His robust style was very old-school, but he was a talented player. 33 goals in 91 games was an impressive return for a player barely out of his teens.

Dalglish made the decision to bring him to Liverpool in January 2011, but the £35m paid for him remains utterly baffling to this day. Carroll never lived up to the hype, and barring an FA Cup semi-final winner against Everton, he was a huge disappointment. Injuries didn’t help, in fairness.

Owen was the star of Liverpool’s team during the late 1990s, and he was widely seen as the most exciting prospect in English football. Having scored on his Reds debut, he went on to find the back of the net 158 times in just 297 matches, including a memorable late double against Arsenal in the 2001 FA Cup Final. He won the Ballon d’Or that year too.

Having moved to Real Madrid in 2004, Newcastle snapped him up a year later. His time in the North East was a disaster, however, with serious injury problems restricting him to just 79 appearances in four years. 30 goals was far from a poor return though.

The legendary Scot enjoyed a superb period as Liverpool boss between 1985 and 1991, winning three league titles and two FA Cups.

He had a short, if unsuccessful reign in charge of Newcastle in 1997-98, before returning to the Anfield hot-seat following the sacking of Roy Hodgson in January 2011. What would your combined XI be? Let us know in the comments section below.