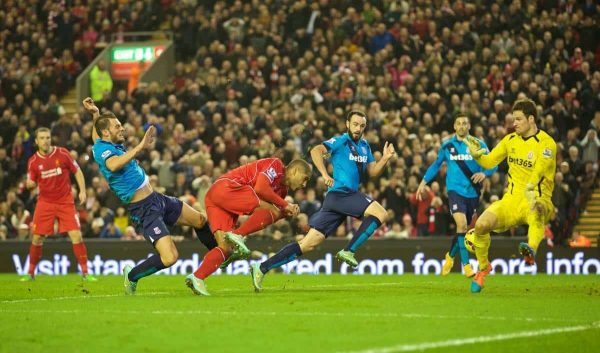 It was 16 years to the day since Steven Gerrard made his Liverpool debut, but, after two 90 minutes games already this week, Rodgers finally dropped his captain for a Premier League game for the first time this season.

Gerrard joined £87 million of summer signings on the bench, as Rodgers kept Kolo Toure and Lucas in the side from midweek and brought in Jose Enrique at left back with Glen Johnson moving to right back.

Liverpool fans groups Spirit of Shankly and Spion Kop 1906 held a pre-match protest by not bringing flags into the ground pre-match, protesting against rising ticket prices.

The first half was a myriad of poor play, crosses across the box to nobody and a very poor tempo to the game.

Two of the last three meetings between these two sides at Anfield ended in 0-0 draws, and for long periods of this game it looked like being a third in four years.

Half time arrived and neither side had had a shot on target.

It was a first half devoid of attacking intent or creativity; a game that very much summed up the league table – 12th vs 13th, separated by one point and neither side with a win in each of their last four Premier League games.

Liverpool were much brighter in the opening to the second half, and Henderson almost opened the scoring shortly after the break but his volley hit the side netting at the Kop end.

It was Stoke who came closest to breaking the deadlock on the hour mark when Bojan’s shot smashed the post at Mignolet’s near post. Second later Sterling almost opened the scoring at the other end but his shot went across the face of goal.

Liverpool should have scored minutes later when they broke 5 vs 3, but the ball was played to Lucas (of all people) and his shot was saved by Begovic.

The home side were dominant and almost scored when Sterling’s cross teed up Allen but his shot hit the top of the bar from six yards out. Lambert had a low shot saved a minute earlier.

Liverpool finally made the breakthrough with 6 minutes remaining. Lambert’s header rebounded off the bar and Johnson bravely headed the ball in from 6 yards.

Rodgers shelved plans to bring on Adam Lallana and instead brought on Dejan Lovren to shut up shop.

Johnson was injured as he scored and that led to seven minutes added time, with Stoke pushing for an equaliser.

Mignolet made a superb finger tip save from Bojan and Liverpool held on for a much needed three points – their first Premier League win since QPR away in mid October.