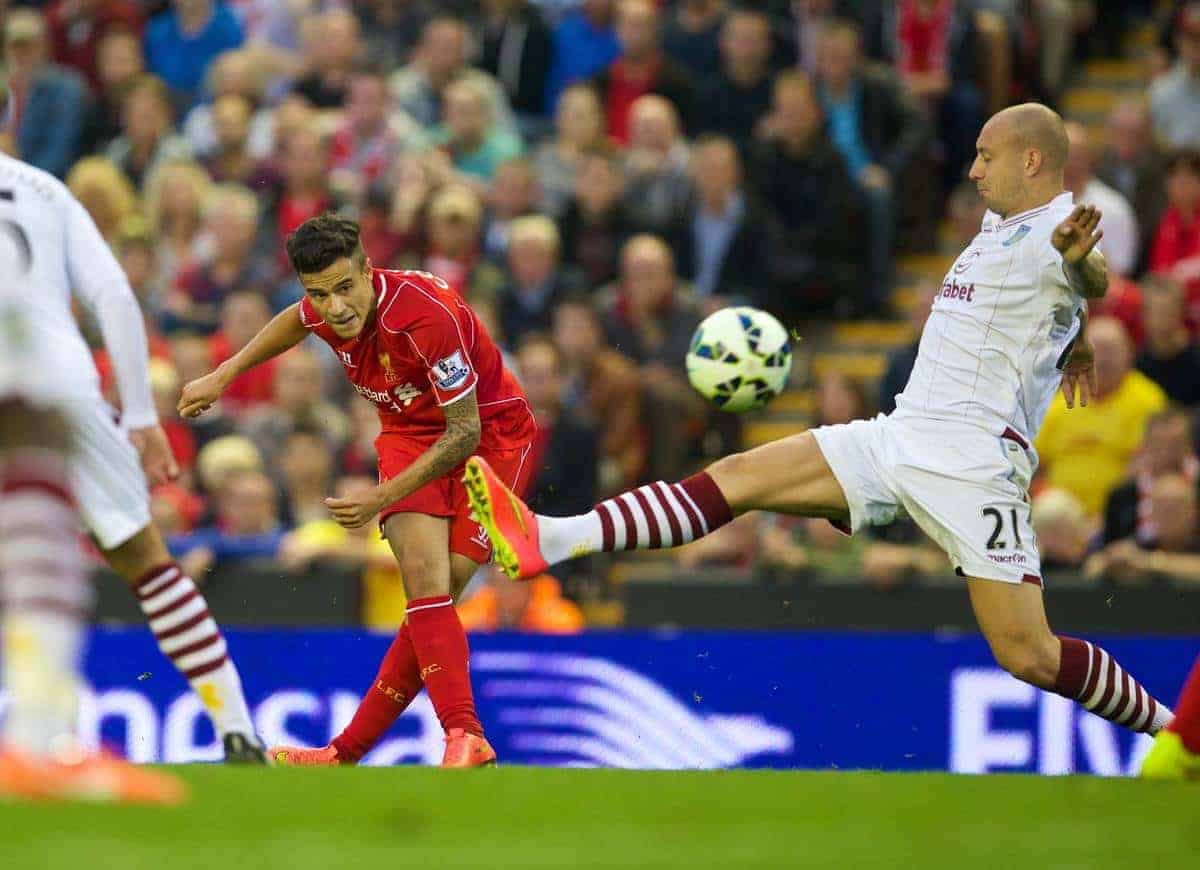 Much has been made of Liverpool’s fragile defence this season, but their two young attacking starlets are also not delivering, writes Henry Jackson.

Luis Suarez’s exit in July was an obvious blow, but if there was one huge positive from this summer, it was the pre-season performances of Raheem Sterling and Philippe Coutinho.

The two young stars, 19 and 22 respectively, were impressive alongside one another on the tour of America, playing with pace, skill and an almost telepathic understanding.

Big things were expected of both in 2014/15, especially as Coutinho had enjoyed the summer off, having not been picked by Brazil for the World Cup, and Sterling was on the plane home before the knockout stages. Both seemed well rested.

Coutinho was talked up by Brendan Rodgers as the “brains of the team” hinting at a more central role in midfield. It hasn’t materialised.

While both players have shown the odd bit of brilliance here and there, their displays have disappointed on the whole. Liverpool currently lie 12th in the Premier League, and while their lack of form is far from the major reason, it’s another contributing one.

The Reds’ defence is taking the brunt of the blame, but if you look further forward you’d have to say Sterling and Coutinho, in the absence of Daniel Sturridge, have simply not stepped up to the plate.

Too often they have found themselves on the periphery of matches and pressure on them to be the attacking spark of the side has been detrimental.

Last season, Liverpool’s front four was sensational. They had the third best player in the world in their ranks, England’s most in-form striker and two of the Premier League‘s best young players at the top of their game.

This time around, their one truly world-class player has left, their brilliant goalscorer has only played three times because of injury and the aforementioned youngsters have been a shadow of their 2013/14 selves. It’s no surprise that Rodgers’ men have looked limp in front of goal.

The tables below show the comparison between Sterling and Coutinho’s Premier League form in the last 12 and 10 games of last season, respectively, compared to in 2014/15 so far – Coutinho has only played 10 times this season (all stats via Squawka and WhoScored).

Coutinho’s statistics are comfortably the more concerning of the two, with less goals, assists and, most significantly, chances created.

Although it makes for fairly grim reading for the Brazilian, it’s worth stressing that he has found himself in and out of the side somewhat this season, and has completed 90 minutes just twice. He’s also been used in a variety of roles, with the team’s attacking shape changing not only by the match but also in match (as evidenced at Crystal Palace where the midfield diamond was scrapped at half-time for 4-2-3-1).

Coutinho has lacked the incisiveness of last season though, both in his passing and dribbling, and too often attacks are breaking down around him. He can often look the Reds’ most dangerous attacking option, but there is actually very little substance coming from him.

Sterling’s figures are pretty similar during both campaigns, which is a shock, and it seems particularly surprising that he has actually created more chances for teammates this season compared to the back-end of 2013/14.

His form was very good in the opening four or games of 2014/15, when used in a more central role, but since then he has been the less effective of the two. His performances have declined dramatically, seemingly since being moved into a wider role more often.

He is clearly nowhere near full sharpness, and you have to wonder whether the tiredness he complained of on England duty is still affecting him. That and the outrageous treatment he received from some quarters for being honest.

The 19-year-old is lacking belief at the moment- something he had in abundance last season – and even things like failing to track Joe Ledley in Sunday’s defeat to Palace would not have happened six months ago.

Both the Brazilian and the Englishman were coming up with key goals and assists in big matches last season – they both scored in the 3-2 win over Man City, for example – but so far in this campaign those moments have been few and far between.

An argument in their defence of course is that there is nowhere the same movement ahead of them with Suarez gone and Sturridge injured.

Mario Balotelli and Rickie Lambert have both been far too static, which has hindered the effectiveness of the diminutive duos’ game significantly. They thrive when others around them are moving – unsurprisingly.

Rodgers started Sterling up front alongside Lambert at Palace, the first time he’s used Sterling there in the Premier League and it would be interesting to see that more often, with Coutinho in the No. 10 role benefiting from Sterling’s movement and pace ahead of him.

Both Sterling and Coutinho are fabulous young talents with enormous futures in the game, and assuming they stay at Anfield, they have the ability to become legends at the club.

Both are struggling at the moment though, with a combination of low self-esteem, rusty form and a lack of quality around them working against them.

Their performances need to improve noticeably, however, and they must prove that their brilliance last season wasn’t just because Suarez and Sturridge were around.