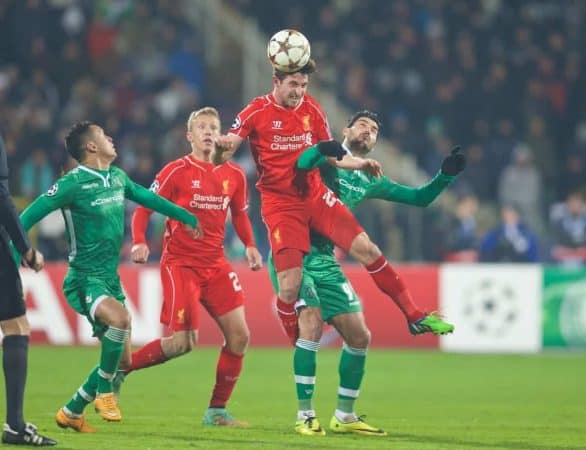 Liverpool conceded an 88th-minute equaliser to Ludogorets, in their vital Champions League clash, as they drew 2-2 in Bulgaria. It means they have to beat Basel in their final group game in two weeks.

It was a huge night of Champions League football for Liverpool, and they knew that victory over Bulgarian side Ludogorets was critical. Defeat would have eliminated them if Basel avoided defeat at home to Real Madrid.

Brendan Rodgers made three changes to the side that performed woefully against Crystal Palace on Sunday. Kolo Toure replaced the out of sorts Dejan Lovren, while Lucas Leiva and Jordan Henderson came in for Adam Lallana and Philippe Coutinho.

It was an absolutely disastrous start for the Reds. Simon Mignolet‘s howler from a Ludogorets shot allowed Dani Abalo to convert from the rebound, and Rodgers’ men had it all to do.

Liverpool were level just five minutes later, thank god, and it was a soft goal for the hosts to concede. A bouncing ball was not dealt with inside the penalty area, and Rickie Lambert snuck in to head home his second goal in three days.

Both sides looked woeful defensively in the opening exchanges, and it seemed impossible that the game would end 1-1. Kolo Toure almost added to his own goal scrapbook, but his interception missed the post by inches.

The Reds looked all at sea from corners once again, and Lambert’s goal had done nothing in terms of stopping Ludogorets’ early dominance. Sterling fired over the bar, but his poor effort was indicative of Liverpool’s start opening 30 minutes. Javier Manquillo shot tamely at Vladislav Stoyanov.

It was an extremely scrappy contest, not helped by a bumpy pitch, but Liverpool were 2-1 up nine minutes before the break. Sterling’s inch-perfect cross found the marauding Henderson at the back, and the 24-year-old did the rest. It was a massive relief for all concerned, not least a passionate Rodgers on the touchline.

It hadn’t been a pretty first-half from the Reds, but at the break they crucially led 2-1. They couldn’t afford to rest on their laurels though, and they needed to improve noticeably after the interval.

The second-half got underway with no changes for either side, and it was sure to be a rather tense 45 minutes. It was a tentative start by both teams.

By the time the game reached the 60-minute mark, there had still not been a genuine chance of note since half-time.

Fabio Espinho’s free-kick failed to test Mignolet, while at the other end, Lambert almost got his second of the night. The whistle had already gone for a foul by Henderson on Stoyanov though, as the former Southampton man’s diving header was blocked on the line.

A deflected Marcelinho effort span just wide, and Ludogorets suddenly went up a notch. It was a real onslaught from the hosts, and the final 20 minutes would certainly test Liverpool’s nervy back-line.

The Reds looked threatening on the break, but the lack of pace between Lambert and Gerrard was an issue. Sterling had a glorious chance to put the game to bed with nine minutes remaining, having been put through by the captain, but he lacked confidence in front of goal.

The 19-year-old was replaced by Alberto Moreno soon after, suffering from a stomach injury. Without Sterling’s attacking threat Liverpool invited pressure with two thiry-somethings toiling up front playing their second 90 minutes in four days.

The final few minutes were incredibly nerve-wracking, and with three minutes remaining it was 2-2. Yet another goal was conceded from a corner – the 13th from set-pieces this season- with Georgi Terziev heading home from a flick-on. It was a hammer blow.

The final whistle blew, and although the late goal was a sickener, Real Madrid’s win in Basel means Liverpool have to beat the Swiss side in two weeks in order to qualify for the knockout stages.

Sterling played from the left, with Henderson on the right. Allen and Lucas were the two deep midfielders protecting the back four.