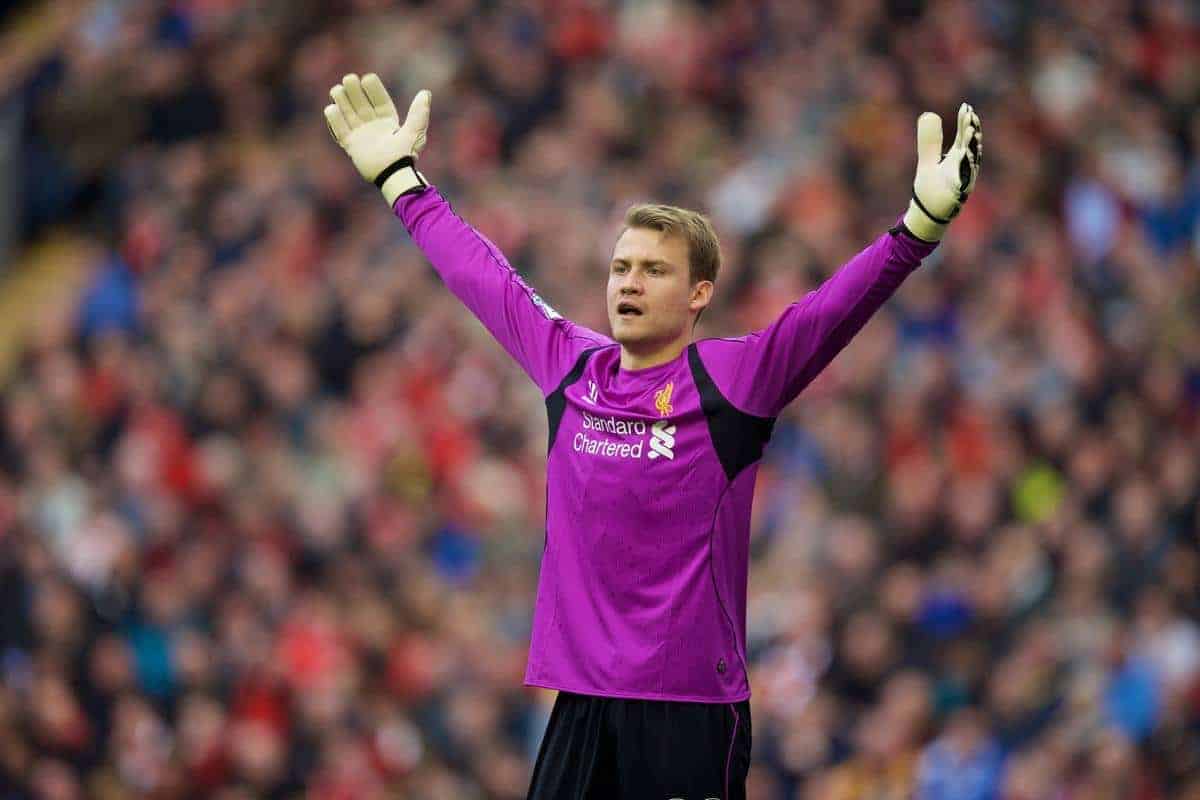 It’s been a tricky start to the campaign for Liverpool goalkeeper Simon Mignolet, recently coming under scrutiny in the media. Nial Toner looks at whether he should be The Reds’ long-term No.1 keeper?

He’s had his good days and bad days since signing for Liverpool from Sunderland in 2013 but with Liverpool’s defence coming under increasing pressure, the big question is, should Simon Mignolet be Liverpool’s long term number one? There are certainly cases for a yes and no to this answer, but for me it’s simple – Liverpool need to start looking for a new goalkeeper and here’s why.

Not everyone will agree with me here but I just think if Liverpool are to really kick on to the next level they need a goalkeeper who will inspire confidence in the defence, and unfortunately for Mignolet, he’s not that man.

There’s no doubting that as a shot stopper Mignolet is up there with the best in the Premier League but the modern goalkeeper is about much more than pulling off a few saves – if they can’t there’d be a problem. It’s the rest of Mignolet’s game that makes me think Brendan Rodgers would be best looking elsewhere next summer.

There are three areas of Mignolet’s game that are having a real impact on the Liverpool defence, a defence that is still coping with injuries and new arrivals. These areas are his communication or lack of it, his ability to come for crosses and corners and his ability with the ball at his feet.

All too often his kick-outs end up in the stand or land at the feet of the opposition. If Liverpool are to continue with this new possession based attacking philosophy that Brendan Rodgers has instilled then they need a goalkeeper who can lead by example from the back.

Now don’t get me wrong, I’d rather have a goalkeeper who is a good shot stopper and poor with the ball at his feet than someone who has feet like Messi but can’t catch a cold!

The part of Simon Mignolet‘s game that I see as the weakest and most frustrating as a Liverpool fan is the 3 C’s – his communication, his command of the area and his ability from crosses.

If we take a look at his rival for the Belgian number 1 jersey Thibaut Courtois, he has a presence that Mignolet simply doesn’t possess. Great coming for crosses and a command of the 18 yard box that fills his defence with confidence, this is the type of keeper Liverpool need, the sort of keeper any top team requires.

Take a look at the most successful teams in the Premier League era – Man Utd of the 90’s had Peter Schmeichel, Arsenal had David Seaman, Jose Mourinho’s Chelsea had Peter Cech and in recent years Man City have had Joe Hart.

While Hart is perhaps the weakest of these four, on their day these goalkeepers were the best in the league when their sides were winning trophies. Mignolet is a long way off this level and his constant flapping at corners and lack of communication with the backline can’t have gone unnoticed by Rodgers and his backroom team.

If Mignolet isn’t to be Liverpool’s long term number one, I suppose the biggest question is, who is?

A regular on the gossip columns since the transfer window closed, Victor Valdes was being strongly linked with a move to Anfield and while he’d offer great competition, I just don’t think he’s enough of an improvement to be viewed as the long term answer to a growing goalkeeping problem at Liverpool.

As a shot stopper he’s up there with Mignolet and certainly has the ability with ball at feet that would suit the current Liverpool style but he has always been a keeper who struggled coming from crosses.

He was always a target in the Barcelona team, particularly from set plays against more physical sides and I could see the same thing happening if he were to sign for Liverpool. The one advantage to signing Valdes would be the added competition and experience. It could be just what Mignolet needs to give him a bit of a push.

Looking at the current Premier League goalkeepers, Asmir Begovic from Stoke City is the only player that fits the bill for what Liverpool need. Still relatively young at 27 he has a great presence in the box and can command his area from set pieces.

He could be just what Liverpool need to shore up a leaky defence. How much Begovic would cost is another story altogether but I can’t help but think when Rodgers was signing a goalkeeper last summer from a team playing in red and white stripes, it should have been Begovic.

When we think of the perfect modern day goalkeeper, Manuel Neuer tops the list. A rock for club and country he has a presence about him that very few keepers can even get close to.

Neuer is one of a clutch of great goalkeepers currently plying their trade in Germany and Brendan Rodgers could do a lot worse than sending his scouting team of to the Bundesliga to find Liverpool’s long term goalkeeper.

The Bundesliga is awash with goalkeeping talent and the likes of Hannover goalkeeper Ron-Robert Zieler, Bayer Leverkusen’s Bernd Leno, Wolfsburg’s Diego Benaglio and Kevin Trapp of Eintracht Frankfurt could all command a place between the posts for many years to come at Anfield.

Do you think Mignolet should be Liverpool’s number one?