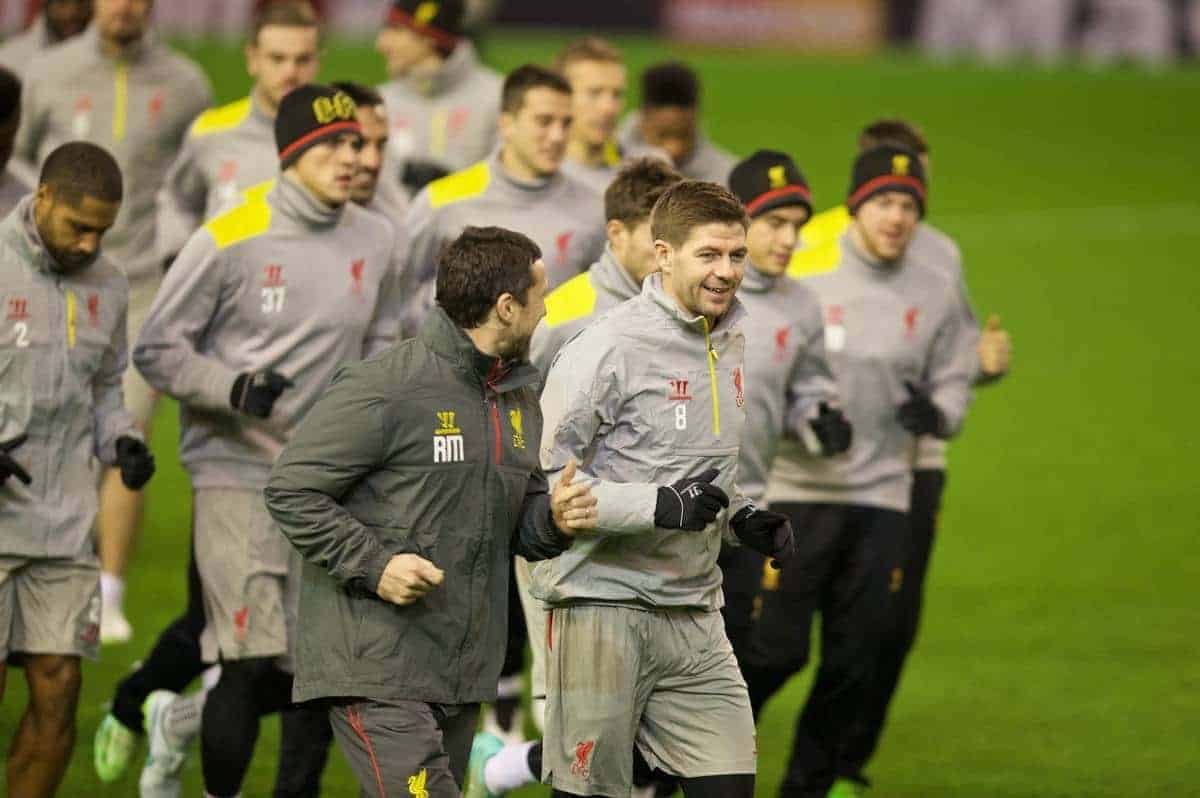 Liverpool face Basel on Tuesday night in a make-or-break Champions League tie – a game that could be added into Anfield folklore. Ben Twelves discusses the all-important team selection options available to Brendan Rodgers ahead of the encounter. Liverpool take on Swiss champions Basel in the highly anticipated win-or-bust tie in their final Group B game, in what Reds everywhere hope will turn out to be another special European night under the lights at Anfield.

Only a victory will do for Rodgers’ men in order for the club to progress to the knockout stages and the players will have to take inspiration on the 10th year anniversary of what was one of a number of momentous European occasions against Olympiacos on the 8th December 2004.

Allen: We’re looking to draw inspiration from previous games [in club’s history]. The support we get will be a huge factor.

The Reds of course pulled through that incredible night thanks to goals from Florent Sinama-Pongolle, Neil Mellor and Steven Gerrard, and Rodgers’ men will be looking to drag themselves through to the knockout stages – just like Rafael Benitez’s side did – after a disappointing group stage to date and in keeping with the ambitions held by players and supporters alike.

An extremely tough job awaits Rodgers and his team – who head into the clash in better form this time around despite performances still being of concern – but so too do Paulo Sousa’s Basel, who arrive on Merseyside full of confidence off the back of five straight wins in which they’ve scored 14 goals and conceded just one.

BR:We have to retain our patience, play a good technical game & have our concentration & focus. If we do that I believe we have great chance

Little has again changed with injuries in the squad meaning Mario Balotelli is likely to miss out, and Rodgers is set to have the same squad at his disposal for the clash as he has had for recent fixtures, though he could finally welcome Mamadou Sakho back to the set-up now the Frenchman has recovered from injury.

BR: I very much doubt any of the players that weren’t available at weekend will be ready.

With the match being Liverpool’s second this challenging week ahead of a trip to Old Trafford, as well the third game of eight in a busy month, Rodgers faces a number of big calls over his team throughout the period starting with Tuesday nights encounter.

Steven Gerrard started Saturday’s draw with Sunderland on the bench but the Liverpool manager has confirmed already that the captain will return to lead his side into battle once more – meaning either Philippe Coutinho or Adam Lallana will make way for his return.

Joe Allen and Emre Can will also be pushing for starts in the Reds midfield for the huge encounter though the Welshman seems the likelier option to come in of the two.

Defensively, there is little reason to change the Liverpool back line after they recorded a second clean sheet in three games, but Jose Enrique could challenge Alberto Moreno for the left-back spot.

Keeping Moreno in the side makes sense to give some defensive consistency and the Spaniard has valuable European experience with Sevilla last season.

Rickie Lambert looks set to lead the Liverpool attack once again with Fabio Borini seemingly of no interest to Rodgers despite the 32-year-old struggling with the continued weekend-midweek demands, and a mobile attacking midfield support will be needed to assist the increasingly immobile summer arrival.

Simon Mignolet will of course continue in goal, and the only real talking point of the back four comes at right-back, with the experienced Glen Johnson Rodgers’ preferred option but with Manquillo offering more solidity defensively, the Spaniards inclusion could be wise but would likely result in the England full-back switching to the opposite side.

In the midfield, Lucas Leiva is likely to keep his place following his recent assured displays and Joe Allen is likely to return alongside him to ensure some ball retention in a vital area of midfield.

Gerrard will reclaim his place in the Liverpool attacking midfield behind Lambert, and Raheem Sterling on one side and Henderson will lineup on the right as he has done recently – his runs into the box will be crucial, as they were away to Ludogorets and Leicester.

In keeping with Rodgers’ preference for the 4-2-3-1 formation, this is how I expect the Liverpool boss to line his team up for the clash: Alternatively, Rodgers could deploy a 4-3-3 formation to allow Lucas to hold in front of the back four, the team to press easier and for more pace around Lambert. In this, Liverpool could look like so: Perhaps the biggest question is whether Rodgers names Borini on the bench – could he be Liverpool’s super sub ala Pongolle and Mellor?

It promises to be a huge occasion on Tuesday and one that we all hope ends up added into the proud history books alongside the other special European nights Anfield has witnessed.

The Reds face a tough task against the Swiss side as proved in the first meeting, but with the electric Kop roaring the team on, it’s time for the players to raise their game, stand up and produce the result needed.