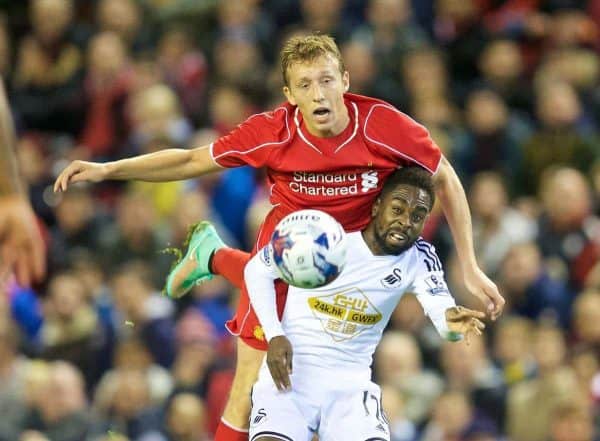 Liverpool close the first half of their campaign on Monday when they welcome Swansea to Anfield.

A win would see them draw level on points with the visitors, although the Welsh side possess a superior goal difference.

As they bid to close the gap on the Champions League places, manager Brendan Rodgers hopes an improved second half of the season can see them fulfil their pre-season ambitions.

Rodgers said: “For us the objectives are very much the same – we want to finish in that top four. We know there’s a long road but the points can whittle away very quickly.

“We’re seven points behind that but we’ll take each game as it comes and if we can keep this momentum going and keep the focus we can have a real good second half to the season.”

Simon Mignolet will return in the Liverpool goal at the expense of the injured Brad Jones.

The Belgian had been “indefinitely” dropped by manager Brendan Rodgers, but was called upon from the bench when Jones suffered a thigh injury against Burnley on Boxing Day.

Fabio Borini returns to the squad following suspension but defenders Dejan Lovren and Glen Johnson (both groin) and Jon Flanagan (knee) are still not fit.

Jefferson Montero is set to miss out for Swansea.

The Ecuador winger, who has been in fine form lately, damaged a hamstring in the Boxing Day win against Aston Villa and is unlikely to feature although he will be assessed in the next 24 hours.

Monk has overseen Swansea’s best start to a Premier League campaign and has silenced the pre-season doubters who felt the rookie manager would preside over a relegation struggle.

And after back-to-back festive victories the 35-year-old is clearly looking up rather than down the table and has urged his players to “hunt the teams” above them.

“I felt that when I took this job at the start of the season that I needed a plan to put on the pitch,” Monk said.

“A lot of people would doubt myself, the squad and what we could achieve, and a lot had us down as relegation favourites.

“Having that plan has helped me and helped the team, I have a long-term plan but in the short term I need to get results and we are getting them.

“The 40-point mark secures the club and we are in a very good position.

“It is about creating expectation without getting carried away and I said to the players in the build-up to this period that I don’t want to be that team looking over their shoulder as we have in the past.

“We have to be mindful of what’s below us but I want them to hunt the teams in front and have that mentality going into games.”