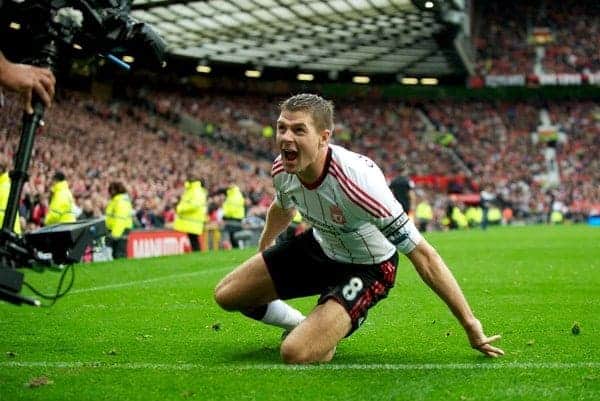 Ahead of Liverpool’s trip to Old Trafford on Sunday, we attempt to brighten the mood by recalling The Reds’ top 10 goals at the home of Manchester United.

The Reds head to Old Trafford on Sunday, in what is arguably the most eagerly-anticipated game for both clubs every season.

The hatred for one another is much-publicised, and victory for either side can often act as a great momentum boost. Given their tussle for a place in the Premier League top four this season, the game has even more significance to it too.

Over the years there have been some memorable victories for Liverpool at the ground of their most bitter enemy, and some fabulous strikes. Here are Liverpool’s 10 Greatest Old Trafford Goals; let’s hope someone else can work their way into the top 10 on Sunday.

In what was quite possibly Liverpool’s greatest ever Premier League away win, it was Torres who brought the sides level after Cristiano Ronaldo’s penalty had given Sir Alex Ferguson’s side the lead.

After Martin Skrtel’s long ball was not properly dealt with by Nemanja Vidic, Torres out-battled the Serb before finishing clinically past Edwin van der Sar. It set Rafa Benitez and his side on their way to a famous victory.

On that same wonderful day back in March 2009, Dossena completed the scoring, as Liverpool humiliated United 4-1 on their own patch.

Hesitancy from the hosts’ defence from a Pepe Reina goal-kick saw the Italian race onto the ball, and he lofted a delightful effort over the hapless Van der Sar. It was the icing on the cake.

Barnes was at the peak of his powers at this point, and he was the difference between the two sides back in March 1990, as Liverpool earned three points in their quest for an 18th league title.

Having been cleverly found on the halfway line by Peter Beardsley, Barnes raced through at great pace before slotting the ball under Jim Leighton. The legendary winger later scored a penalty too, as Kenny Dalglish‘s side ran out 2-1 winners.

Having struggled to break his Old Trafford scoring duck until his late 20s, Gerrard has now hit the back of the net numerous times there. This was his best strike to date though.

Having scored a penalty to reduce Liverpool’s deficit to 2-1 back in September 2010, the skipper somehow found a gap in the United wall from a free-kick to stun the home crowd. His celebration was memorable.

1st October 1995 was meant to be all about the return of Eric Cantona from long-term suspension, but it was Fowler who was the star on the day.

Having already scored a brilliant first for the Reds- more on that later- ‘God’ delightfully out-muscled Gary Neville before clipping a typically classy finish past Peter Schmeichel.

It had been over a decade since Liverpool had beaten their bitter rivals at Old Trafford when the two teams met in December 2000. United were also unbeaten at home for two years.

It was a gritty encounter throughout, but the game’s pivotal moment came via Murphy’s brilliant first-half free-kick, after Neville’s needless handball on the edge of the box. It was an enormous achievement by Gerard Houllier’s side.

Just over a year after his match-winning exploits, it was Murphy who was yet again the hero at the so-called Theatre of Dreams.

With the game seemingly drifting towards a 0-0 draw, Gerrard’s sublime pass found Murphy, and the Englishman dinked a delightful effort over Fabien Barthez. It was a wonderful victory, and it helped Liverpool finish above United that season.

Berger was a very fine player for Liverpool, and one who would have been a real superstar at Anfield had injuries not plagued him. This goal was arguably his finest moment in a Reds shirt.

The Czech Republic fired an unstoppable 35-yard free-kick past Raimond van der Gouw in front of the Stretford End, giving the Merseysiders a 1-0 lead in the process. They may have had to settle for a 1-1 draw in the end, but that couldn’t take the gloss off Berger’s fabulous strike.

The Reds seem to have made a habit of scoring memorable free-kicks at Old Trafford down the years, and this was the best of the lot because of both its execution and importance.

With Liverpool 2-1 up in a must-win game, Vidic had just been sent-off for hauling down Gerrard. From the resulting set-piece, Aurelio bent a wonderful effort past Van der Sar and into the corner of the net. It sent the away fans into raptures, and was the standout goal on an amazing afternoon in Manchester.

There are some superb goals in this list, but this magnificent strike from Fowler in the aforementioned Cantona comeback game is the finest Liverpool goal ever scored at Old Trafford.

Having been found in space on the left wing, the logical thing for the young striker to do was to look for Ian Rush in the penalty area.

Instead, he hit an audacious effort past Schmeichel’s near post before the Dane knew what had happened. It was a goal that summed up the finishing genius of Fowler, and has been replayed many times since. 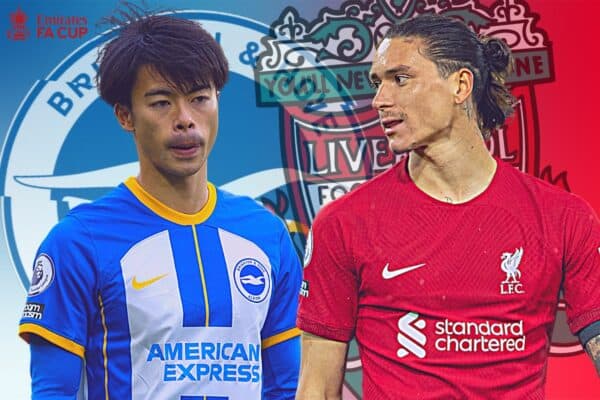