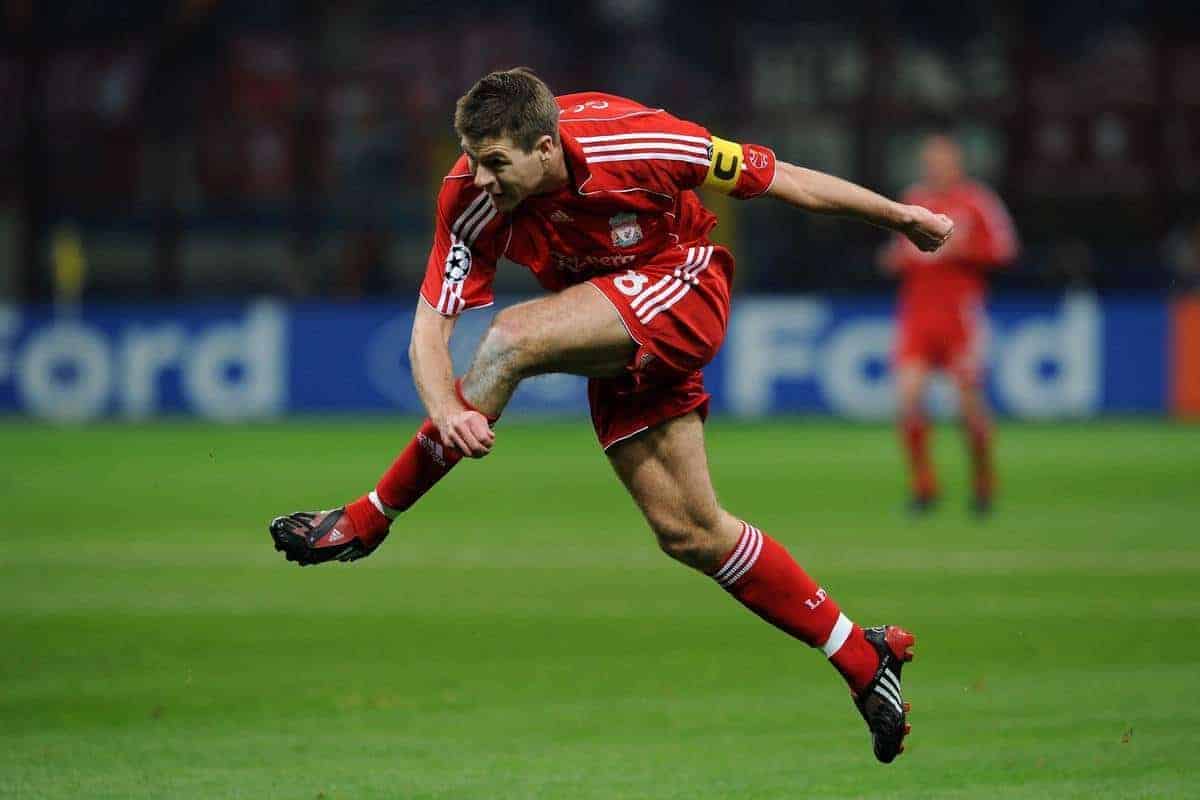 Steven Gerrard has confirmed his Liverpool departure this summer – we look back at five memorable moments from the skipper that don’t always get the plaudits they deserve.

Gerrard had made his Reds debut just a few months prior to this Merseyside derby at Anfield in April 1999, and although he didn’t come on until 71 minutes into the game, he turned out to be the hero on the day.

Having led 3-1, Francis Jeffers’ goal six minutes from time made things nervy for Gerard Houllier’s side. The Toffees threw everything at the Reds looking for a late equaliser.

In the dying seconds, the then 18-year-old Gerrard twiced cleared off the line, one of them a courageous block from Danny Cadamarteri’s shot, to help preserve the Reds’ lead.

His fist-pumping celebration following that incident, normally associated with scoring a goal, outlined his sheer will to win even at that age.

This Champions League last-16 clash with the Serie A giants in 2007/08 was an extremely tight affair, but it was Gerrard who turned the tie completely in Liverpool’s favour after a frantic first-leg showdown on Merseyside.

Rafa Benitez’s side had taken a long time to break down 10-man Inter, who had seen Marco Materazzi sent-off in the first-half, but Dirk Kuyt fired home after 85 minutes. Just when it looked as though that would be the only goal of the game, ‘Captain Fantastic’ struck.

Picking the ball up on the right-hand side, 30-odd yards from goal, most players would simply loft a hopeful cross into the penalty area. Not Gerrard though, who thundered a brilliant effort past Julio Cesar and in off the post.

Liverpool eventually reached the quarter-finals with relative ease, but it was Gerrard’s typically inspirational goal that put the Reds in total command.

By the end of the 2002/03 season, Gerrard was starting to become the most influential player at Anfield. A win at home to Charlton, in their fourth-last game of the campaign, was vital in keeping their Champions League qualification hopes alive.

Sami Hyypia had levelled Shaun Bartlett’s opener with an 86th-minute effort, and Houllier’s men were desperately pushing for a dramatic winner.

In stoppage-time, Gerrard twisted and turned past numerous Charlton challenges on the left, before firing a low shot past Dean Kiely and into the corner of the Kop net. Anfield went bezerk, and it epitomised the soon-to-be skipper’s ever-increasing genius.

The Europa League may not be the most beloved competition to football fans, which is perhaps why Gerrard’s fantastic second-half cameo back in November 2010 is not often talked out.

Ezequiel Lavezzi’s first-half strike was the difference between the two sides with 15 minutes remaining, which is when the captain, on as an emergency half-time substitute, decided to produce a majestic one-man show.

He pounced on former Red Andrea Dossena’s loose pass to make it 1-1, nervelessly converted a penalty to give his side the lead, before impudently dinking a wonderful finish past Morgan De Sanctis to complete his hat-trick. Gerrard was the sole reason Liverpool won the game.

Ok, so this may be a little bit ludicrous, considering just how poor TNS were as a side, but Gerrard still showed that there was a chasm in class between himself and anybody else on the pitch back in 2005.

The Reds had to play the Welsh side in the early qualifying rounds of the Champions League in 2005/06, having won the competition the previous season but finished fifth in the Premier League, and it was all about Gerrard in both legs.

He scored a hat-trick in the 3-0 first-leg win at Anfield, which was more hard-earned than expected, and in the return fixture he scored two goals, one of which was a sensational solo effort. It was like watching a man play football against a bunch of 11-year-olds.

Can you think of any other forgotten Steven Gerrard masterclasses? Let us know in the comments section.