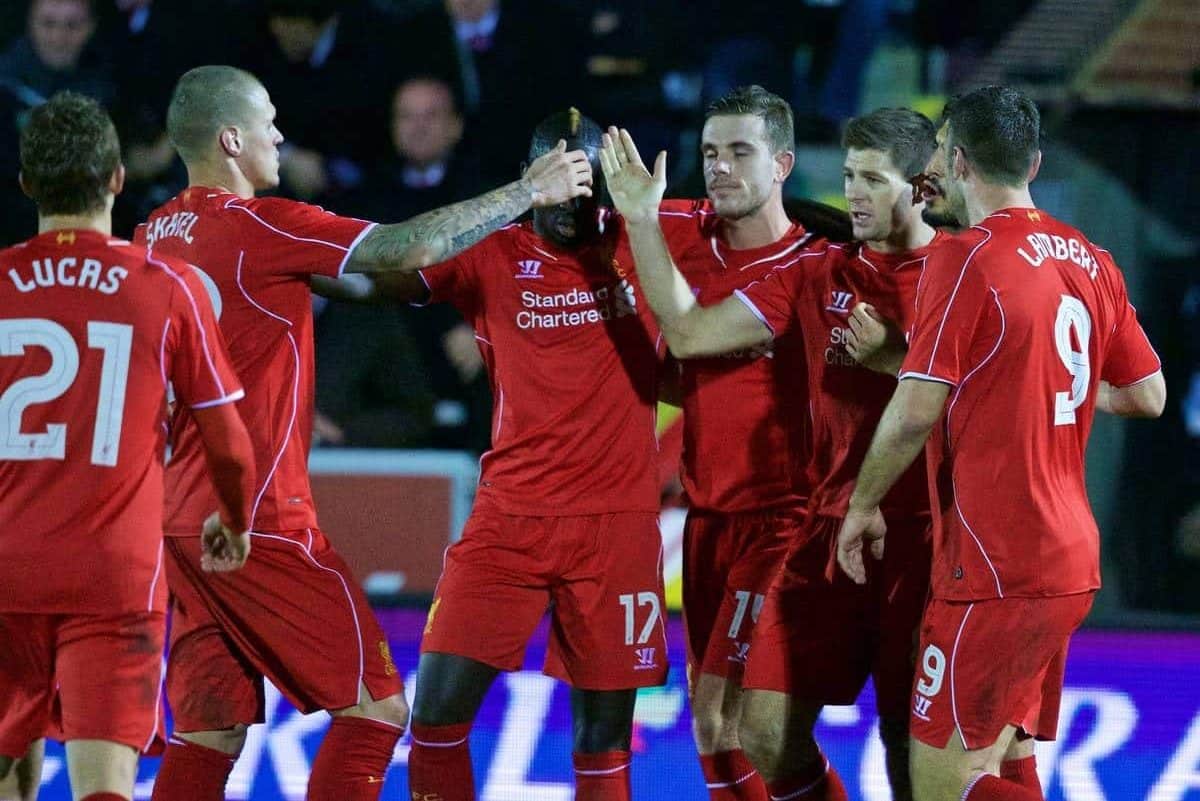 After Liverpool’s 2-1 away victory over AFC Wimbledon on Monday night, Jack Lusby selects his best and worst Reds performers.

It may not have been the whitewash it initially seemed, but Liverpool recorded a vital 2-1 FA Cup third round victory over AFC Wimbledon on Monday night in what could have been another embarrassment on the domestic stage.

Two goals from captain Steven Gerrard were enough to see Brendan Rodgers’ side across the line and towards a fourth-round tie with Bolton Wanderers.

But who were Liverpool’s best and worst performers? Take a look at our suggestions as we play good game, bad game once more.

A good game for Mamadou Sakho

Keeping his place in Rodgers’ starting line-up despite the looming return of favoured-option Dejan Lovren, Mamadou Sakho proved once again just why he is considered by many as Liverpool’s most accomplished central defender.

Sakho dealt well with the physical side of the game, as embodied by the brutish Adebayo Akinfenwa, and won five aerial duels and a further three tackles at the Kingsmeadow.

No Liverpool player won more of these defensive duels combined.

Furthermore, Sakho continued to highlight his comfort on the ball, with an exceptional long ball to right- wing-back Javier Manquillo evidence of this.

Sakho saw the most possession of any Reds defender, with 7.6 per cent; this is more than any Wimbledon player, and the fourth highest in the Liverpool side on Monday night.

Why media rhetoric continues to suggest he has mistakes in his game, and is too “ponderous” on the ball—as highlighted by commentator Guy Mowbray—is bemusing.

A bad game for Rickie Lambert

Summer signing Rickie Lambert has spent much of Rodgers’ recent systematic-renovation period on the sidelines, but the striker was afforded a start in favour of the rest Raheem Sterling on Monday.

However, operating as a lone centre-forward in a system which is based on the pace and movement of its striker, Lambert was doomed to fail.

Completely anonymous in the first half, Lambert’s contribution barely got going as the game went on, with his lack of movement and predilection for the offside hugely disappointing.

Lambert had just 37 touches of the ball on Monday, less than any other Liverpool starter.

Liverpool don't play to Lambert's strengths. Fair point to raise. Never made when Mario plays though. Easier to just call him lazy.

What made Lambert’s contribution more disappointing was the presence of Mario Balotelli on the substitutes’ bench.

Balotelli had more shots (2) and made more dribbles (1) than Lambert in the 12 minutes he spent on the pitch after replacing the former Southampton man.

A good game for Steven Gerrard

"He scored two fantastic goals and got us through," reflected @LucasLeiva87 on Steven Gerrard last night #LFC pic.twitter.com/HHfN2kdtv3

It would be difficult to discuss Liverpool’s best players of the night without mentioning Steven Gerrard, as the captain’s two goals gave Rodgers’ side the victory.

Making his first appearance after announcing his intention to leave the side in the summer, Gerrard looked set on making an impression at the Kingsmeadow.

Deployed in a more attacking role against Wimbledon, replacing the injured Adam Lallana, Gerrard was freed of his defensive duties and given license to push forward.

With four shots on target on Monday night, Gerrard was always the most likely to test Wimbledon goalkeeper James Shea—no player hit the target more times.

Gerrard is an incredible leader & inspiration on & off the field. I wish him & his family luck in their next chapter, they will be missed!

It wasn’t Gerrard’s best game, overall, and Liverpool are likely to see that in his final six months with the club, but the captain showed a determination to drag his side over the line that has hallmarked his time on Merseyside.

A bad game for Simon Mignolet

After reclaiming his No. 1 position at Liverpool following injury to the previously preferred Brad Jones, Simon Mignolet was a shoe-in for Monday night’s starting line-up.

Why, however, the 26-year-old suffers a continual dearth of confidence between the sticks remains to be seen—a disappointing flap at a corner allowed Akinfenwa the space to score Wimbledon’s equaliser.

Mignolet simply not strong or commanding enough under pressure from Akinfenwa there.

Mignolet went some length to redeeming himself with some six-yard-box heroics late on, and made an exceptional save earlier in the game, but the goalkeeper’s lasting contribution was his shaky attempt at a claim.

Another miserable night for a player struggling to find a future at Liverpool.

A good game for Lucas Leiva

Lucas Leiva continued his Lazarus movement in midfield on Monday night with a comfortable, assured display.

In what seemed an effectively man-marking role, Lucas dealt well with Akinfenwa for the most part, particularly when breaking up play before it reached a critical point for Liverpool’s defence.

Lucas made five tackles on Monday night, more than any other Liverpool player.

Furthermore, Lucas outshone both Gerrard and Jordan Henderson in terms of all-round midfield play, providing Liverpool with a measured confidence in the middle of the park.

While not the most noticeable candidate for Liverpool’s best performer against Wimbledon, Lucas’ quietly functional display alongside Henderson at central midfield provided the Reds with the base to build their many attacks.

A bad game for Emre Can

Deployed once again on the right-hand side of Rodgers’ three-man defence, 20-year-old Emre Can unfortunately failed to impress against Wimbledon on Monday night.

Can has been one of Liverpool’s top performers in recent games, adding another composed, cultured presence to the defence along with Sakho.

However, it seems that the raw, physical challenge posed by Wimbledon stretched the German.

This can be evidenced by Can’s mere two aerial duels won, which pales compared to Akinfenwa—his direct opponent—who won six.

Can was also Liverpool’s most profligate defender in possession, registering a lowly 78.8 per cent passing accuracy compared to Sakho’s 86.4 and Martin Skrtel’s 95.6.

By no means did Can embarrass himself at the Kingsmeadow, but he was one of Liverpool’s weakest performers.

Who were your best and worst performers for Liverpool against AFC Wimbledon? Let us know in the comments below.