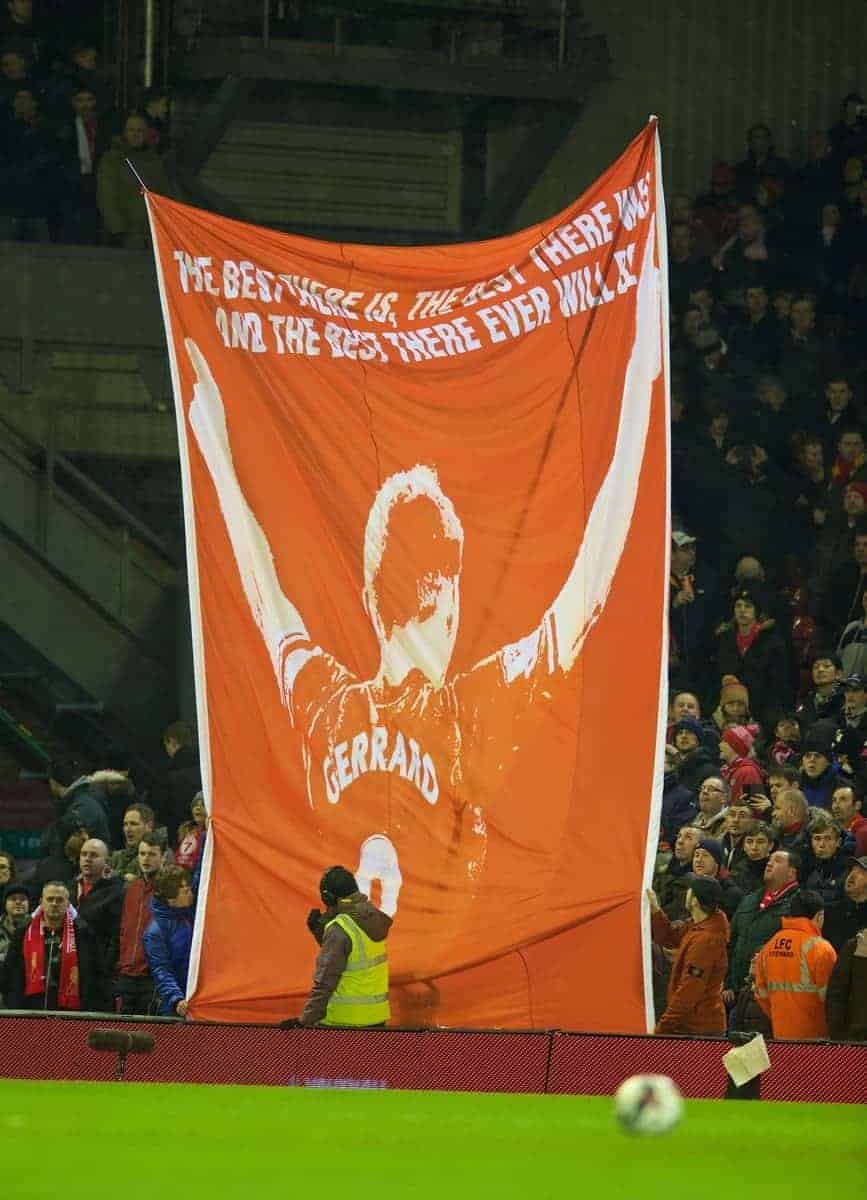 We round-up the best newspaper reaction from Liverpool’s 1-1 draw, and superb performance, against Chelsea in the League Cup semi-final first-leg at Anfield on Tuesday evening.

Brendan Rodgers’ side treated the home faithful to a terrific blend of fluent attacking football and relentless pressing, as they completely outplayed Jose Mourinho’s side from start to finish.

Eden Hazard’s first-half penalty, the Blues’ only shot of note on goal, was cancelled out by Raheem Sterling’s terrific solo effort, and Steven Gerrard, among others, came close to a dramatic winner. It leaves the second-leg at Stamford Bridge finely poised.

The Mirror applauded the display of Sterling, who looks revitalised after a mid-season break in Jamaica:

Rodgers’ decision to take his main man out of the firing line this month looks like a masterstroke after a performance of explosiveness and guile. He was the one Liverpool player who provided a threat in the first half and came good on that promise after the interval with a bewitching goal.

Little appeared to be on when the Sterling picked the ball up 40 yards from goal, but his pace took him clear of Nemanja Matic and John Obi Mikel. Gary Cahill moved out to close him down, but it was too little, too late: Sterling shifted the ball onto his left foot and fired confidently into the far corner. Magic.

No player U-21 has created more chances than Raheem Sterling this season (50) across Europe's top 5 leagues. pic.twitter.com/lNWJKHSpzM

The Independent‘s Ian Herbert lauded the performance of Steven Gerrard, more for its subtlety than the marauding style we associate with the skipper:

What he (Gerrard) provided was something incalculably brighter and more technical than an old stager’s last stand. Gerrard might be remembered as a mud-scarred gladiator on big nights like this but tonight he was instead at the nexus of quick, neat geometrical football which meant that Liverpool could take courage and heart at half-time, despite processing in a goal down.

Gerrard was a link in this machine, not its engine, and there was more than enough to muffle the taunts. His backheel which sent a Henderson pass on the left touchline into open play, taking Nemanja Matic and John Terry out of the picture at a stroke, was memorable.

Ian Doyle of the Liverpool Echo heaped praise on Philippe Coutinho, who was majestic at times, highlighting both his improved form and admirable work-rate:

As Liverpool have improved, so the revitalised Coutinho has been at the heart of the revival. The most telling factor has been the midfielder’s willingness to match his flair with a solid work-rate, the prerequisite of any successful player as the efforts of Eden Hazard and Diego Costa have shown throughout the campaign.

Now Coutinho is beginning to gain reward for his efforts. Strangely, the swift in formation that has allowed more attacking freedom has also prompted him to gain a greater appetite for hard graft.

Coutinho has stepped up since we switched to the new formation. Currently in his most consistent run of form since joining the club. Magic.

Andy Hunter of The Guardian was full of praise for Liverpool’s defence, despite Emre Can‘s sloppy conceding of the penalty, highlighting Rodgers’ change of formation as the reason for their improved form of late:

Few would have come up with 3-4-2-1 as the formation that would drag Liverpool out of the malaise that threatened to engulf their season two months ago.

Even fewer would have identified Can, Martin Skrtel and Mamadou Sakho as a foundation for that gradual recovery and the source of long overdue defensive improvement in Rodgers’ team.

Next up for Liverpool is Saturday’s home FA Cup fourth round tie with Bolton Wanderers, which will see former Red Emile Heskey return to Anfield.