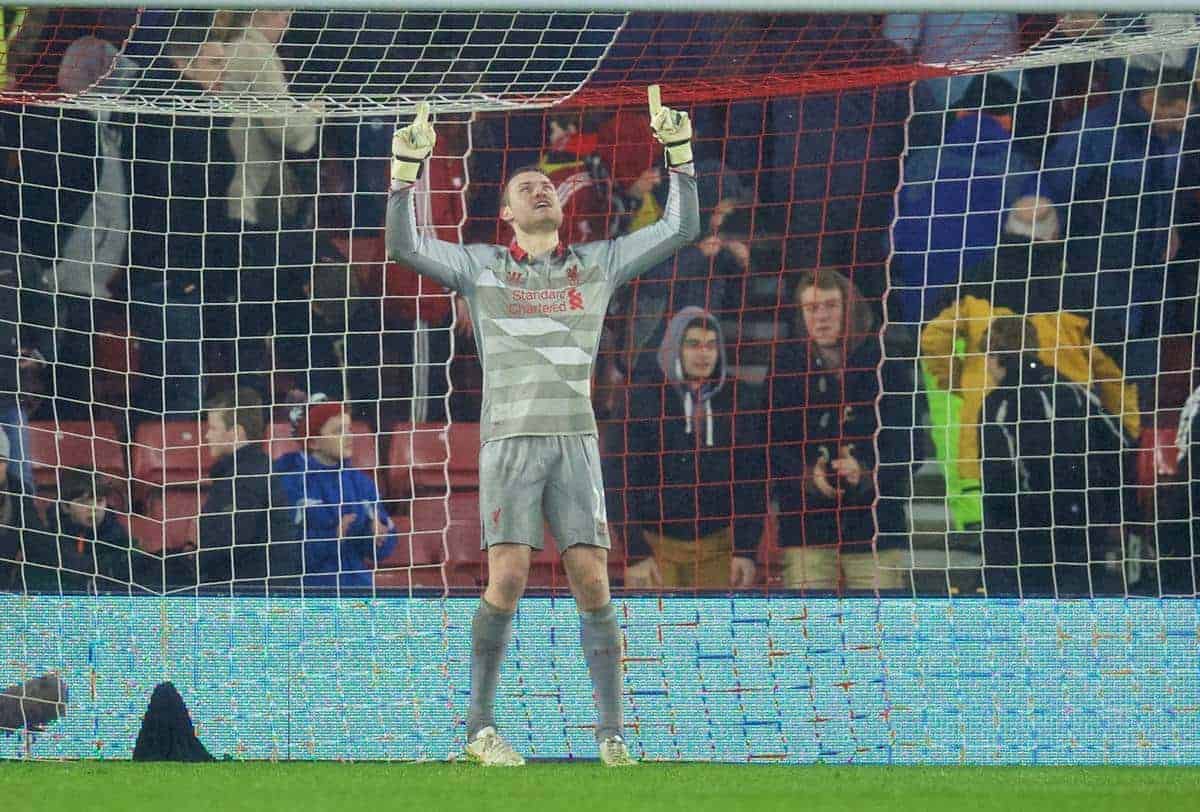 Liverpool took a big step towards top-four contention in the Premier League with a 2-0 victory away to Southampton on Sunday.

After this, manager Brendan Rodgers has the ever-improving Simon Mignolet to thank.

Moving within one point of the Saints in the race for Champions League qualification, as well as leapfrogging fellow rivals Tottenham Hotspur and closing in on Manchester United and Arsenal, this victory was crucial.

An early goal from Philippe Coutinho and a 73-minute strike from Raheem Sterling were enough to seal the three points for the travelling Reds.

Mignolet, locked in a battle of the goalkeepers with Fraser Forster, played a big part in what was a confident display.

David De Gea, Thibaut Courtois, Wojciech Szczesny, Hugo Lloris—these are the names that would have been expected to be challenging for the Premier League Golden Glove award at the beginning of the season.

But a different set of challengers has risen for the clean-sheet crown, and Mignolet and Forster continue to vie for this coveted end-of-season award.

This made Sunday’s clash even more interesting, as two of the league’s best defences went toe to toe; if anything, this had 0-0 written all over it before the game.

Forster’s impeccable record was undone within three minutes, however, as Coutinho’s 30-yard scorcher wrong-footed the England international, crashing against the Southampton crossbar and over the line.

The 26-year-old could be forgiven for letting that one in, but his unconvincing attempt to stop Sterling’s goal underlined a disappointing day for Forster.

While his counterpart was embarrassed on his own turf on Sunday, Mignolet served up another performance brimming with confidence and technical prowess.

With Mamadou Sakho injured for this clash, Liverpool lined up with a decidedly makeshift defence of Dejan Lovren, Martin Skrtel and Emre Can.

With Lovren assuming Can’s usual right centre-back role for his first start for the club in two months, and Can moving to Sakho’s left-sided position, Liverpool’s defence was understandably shaky from the outset, despite the best efforts of an outstanding Martin Skrtel.

This wasn’t aided by the surprisingly direct approach often employed by Koeman’s side, and Southampton tested the Liverpool goal with 13 shots.

But, happily, Mignolet was in exceptional form, saving every shot sent his way, and also dealing well with the Saints’ set pieces—the goalkeeper rose above his oft-flailing back line with confidence.

Mignolet also made two punches and one successful claim. Impressive given the conditions at St. Mary's. #LFC

After the game, Mignolet referenced the harsh February evening downpour, claiming “I’m still freezing here,” outlining quite how difficult the challenge was to exercise such consistency and concentration in goal.

Of course, Mignolet is far from the complete goalkeeper, as his miserable 26.9 percent passing accuracy outlines.

In such good form, however, and continuing to contribute to Liverpool’s enviable clean-sheet record, it is hard to criticise Mignolet—he is doing all of the important things right.

Mignolet’s besting of Forster at St. Mary’s stands as another significant step in the improvement of what was one of the Liverpool’s least popular figures, and a further boost in confidence for the goalkeeper.

At an all-time low at the end of 2014, confidence became a negative buzzword surrounding Mignolet at the time, as he looked to quake at the prospect of a ball lofted into the box.

Now, and with another clean sheet in Sunday’s victory over Southampton as further proof, Mignolet deals with these threats with the confidence that it was feared he had lost, and it has come at the perfect time for Rodgers’ side.

After Liverpool’s win over Southampton, Rodgers side take on Besiktas on Thursday.

The Turkish giants may have moved from the formidable Inonu Stadium and into the decidedly soulless Ataturk Olympic Stadium but Besiktas’ fans will make this European night difficult.

Liverpool will need a cool head between the sticks, and the way in which Simon Mignolet dealt with the rain-soaked threat of Southampton on Saturday, vanquishing Golden Glove rival Fraser Forster on the way, proved he has the confidence to succeed.

Can Simon Mignolet finish the season with the Premier League Golden Glove award? Let us know in the comments below.