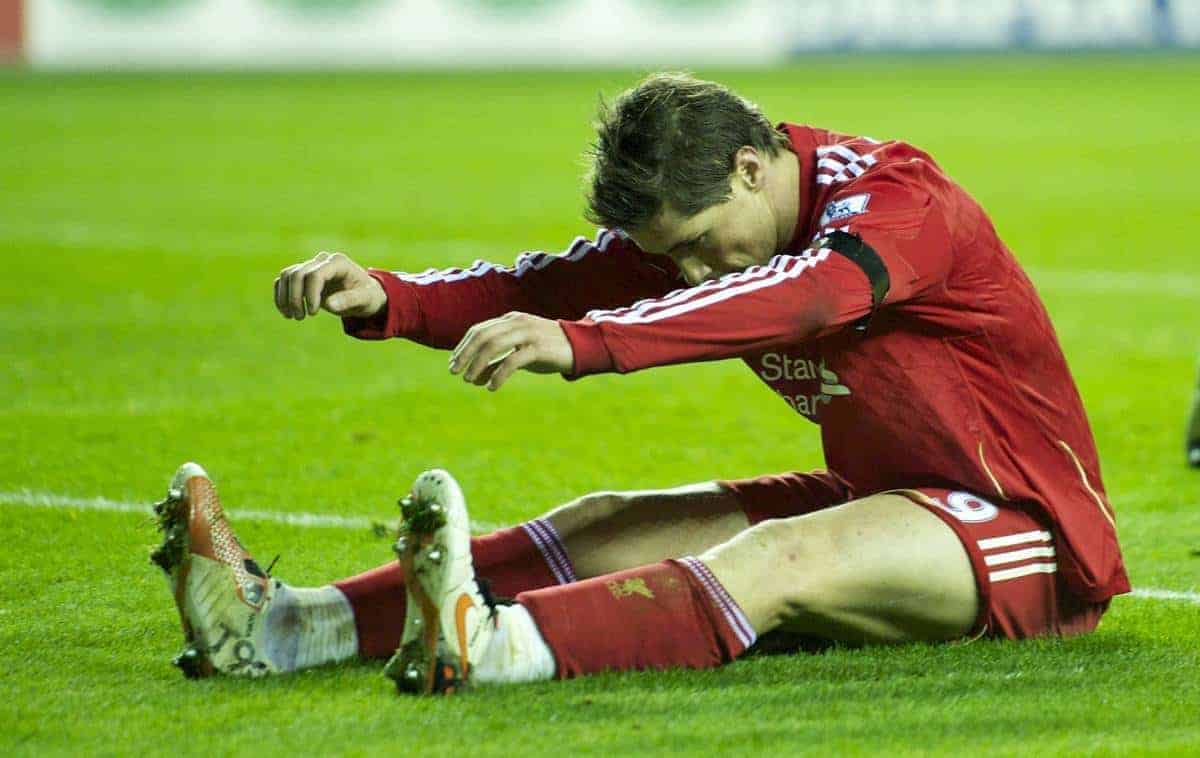 Ahead of his upcoming return in the All Star charity match, Aaron Cutler reflects on Fernando Torres’ Liverpool career and his current standing amongst supporters.

Anfield will play host to an All Star charity match on Sunday, featuring some of European football’s biggest names. Though cosmopolitan in flavour, this contest will have Liverpool at its core – sides derived from the club’s recent history and captained by local legends Steven Gerrard and Jamie Carragher.

Our celebrated scouse double act met at Melwood last week to hammer out their respective squads, reeling off teammates of yesteryear and serving-up no shortage of playful humour.

Within their returning rat pack will be Fernando Torres, a comeback sure to divide opinion amongst what will be a 45,000 sell-out crowd.

Firstly, it must be stated Torres’ return is at the request of Gerrard and for charitable purposes. For that the Spaniard deserves great recognition, along with fellow professionals forgoing international respite to help out a friend and city.

Whilst naming his star-studded squad the Liverpool captain said of his former colleague and the recently departed Luis Suarez: “The partnership I’m going for is the two best strikers I’ve played with. I would have loved them to be a partnership, I’m sure you (Carragher) would have too.”

Sadly that union never came to pass, El Nino fleeing Melwood through the backdoor on the same day El Pistolero was smuggled through its entrance. A body blow to all Kopites, this episode proved a bitter pill to swallow, particularly given its timing and the player’s curious choice of destination. But now, four years on, is it time to forgive and forget?

It is a question I have wrestled with ever since his participation was announced. They say time is a great healer but in this instance the smell of betrayal lingers, surely preventing a hero’s welcome.

The man returning to L4 and currently striving to relive former glories at The Vicente Calderon is in truth a shadow of the player that joined Liverpool in 2007. That fresh faced kid with the dip dyed hair would go on to establish himself as the deadliest striker in Europe over the course of three tremendous years. Those tinted locks aside, there are now few reminders of what became a phenomenon.

Highly rated but by no means prolific in his homeland Torres took to the Premier League like a duck to water. His pace, touch and eye for goal were underpinned by a ravenous work ethic and combativeness that shocked those assuming they could bully him out of proceedings.

With team and Gerrard geared towards bringing the best out of him, Torres plundered 33 goals that debut season, none of which stemmed from the penalty spot. In a word he was unstoppable, a fact reaffirmed at the following summer’s European Championship, a tournament he clinched courtesy of a glorious dinked finish. By 2008 Torres was a footballing Tour de Force.

All fans love a goalscorer but what distinguished the Madrid native from his peers was his humble nature. A sincere appreciation of the club, its history and culture was refreshing; here was an import seemingly immersed in his new surrounding and destined for greatness. He bought into The Liverpool Way and as a result was placed high upon a pedestal, worshipped by The Kop in a vain not seen since Robbie Fowler in his pomp.

His signature chant shook Anfield to its very foundations, capturing a bond between player and fans seemingly made for one another.

That love in was perhaps best demonstrated when the reds exchanged blows with Arsenal in a breathtaking Champions League Quarter Final. With game and tie level The Spaniard controlled a Peter Crouch flick-on with his back to goal, only to swivel and unleash a rasping effort into the top right corner of The Kop net, sparking unchecked delirium. In scenes reminiscent of the march to Istanbul Torres slid in-front of his adoring public, themselves continuing a remarkable blaze through Europe.

Had injuries not hit he and Liverpool would surely have hoisted a Premier League title the following season, a narrow miss that preceded a brutal fall from grace. As civil war beset Anfield collateral damage came in the form of results and high profile departures. Amidst this sad unravelling came a shift in attitude for the self-styled poster boy, his tenacious zest displaced by a brooding scowl and a paralysing dip in form.

Flashes of brilliance were still evident – as Manchester United and Nemanja Vidic would attest to – but they became far less frequent, as did the sight of Torres harassing defenders in the manner of that initial honeymoon period. Many fans remained blinded by his beaming halo but seasoned observers and teammates identified this switch in mood.

“Torres wasn’t the same player for about 18 months. He gave the impression of having downed tools – and that’s certainly what you don’t want” said Carragher. “There were times, I believe, Torres wasn’t giving his best on the pitch for Liverpool and that is why it was a mistake to keep him.”

Ardent supporters leap to the Spaniard’s defence here, citing Christian Purslow and a stream of broken promises as justification for what was in effect a massive cob on. They are of course wrong to excuse such unprofessionalism.

Lest we forget Torres was pocketing £120,000 a week at the time, a handsome dent in coffers quickly disintegrating. He may have been hoodwinked by talk of investment and incomings that never materialised but his personal disappointment should never have seeped into his game. That it did is frankly shameful and a blemish on his reputation.

Even his dear friend Pepe Reina lamented this sudden disinterest. “When you are in a team you have to give everything you have to them in every single game you play and for me, the only cause for regret Fernando can have is that during the last three or four months at Liverpool he wasn’t himself.”

Those that sympathise with Torres’ frustrations forget the landscape had changed dramatically come his eventual departure. By January 2011 new owners had seized power at Anfield and wiped-out £350m worth of debt. Big money signings were finally on their way, a prospect made all the sweeter by the long-awaited removal of Roy Hodgson and the widely heralded reinstatement of Kenny Dalglish.

Yet standing at this improved crossroads the real Torres was unveiled. In opting for Chelsea, a soulless antithesis of Liverpool riddled with vulgarity from boardroom down to supports, Torres was exposed as a fraud – someone who had wormed his way into Kopite affections without ever truly understanding or caring for the spirit of Liverpool. A false idol he had stuck two fingers up to his adoring public whilst being whisked down the M6 in blacked out windows.

A true hero stays in an hour of need, a mercenary jumps ship. Plenty of water may have passed under the bridge but the manner of his departure still rankles and will continue to do so for all who bought into the myth of brand Torres.

With his exit went an unfiltered trust of all donning red. It underlined the fact that loyalty is but an ideal in modern day football. For the first time since the advent of the Premier League we were cast as the beleaguered boyfriend ditched for a richer alternative; our misery compounded by the ugly rebound intended to ease the pain (Andy Carroll).

Looking back it is fair to say Liverpool fared pretty well out of this an infamous deal. £50m proved inspired business for a player on a downward trajectory, devoid of pace and confidence and lost in a manufactured environment shamelessly adorned with plastic flags unable to inspire a passive support.

Moreover now starved of his primary supply (Gerrard) and ordered to acclimatise to the team rather than they to him, Torres lost his way spectacularly – picking up that elusive silverware as a bit-part player, a flop.

That may have eased the pain for droves of supporters but others, myself included, are less forgiving.

Torres spoke of his departure last May, attempting to diffuse the situation and explain his untimely runner.

“Everything they’ve heard is the version that some people at the club have given to the media and have spread among the supporters. They’ve made it out to be something, which isn’t the truth.”

But no amount of spin can disguise the fact Torres downed tools and abandoned the club for a domestic rival despised on Merseyside.

As with Michael Owen before him, he soon found the grass is not always greener and though pound signs may loom large the unfettered support of The Kop can never be rediscovered.

Credit to the player for making the effort next week, charity work should be applauded no matter whom the personality.

But while I’ll enthusiastically greet the returns of Pepe Reina, Luis Garcia, Xabi Alonso and Dirk Kuyt I will not be extending that courtesy to a fallen idol; a rogue whose armband may well have proved he was a red but whose subsequent treachery ensures he’ll forever walk alone.