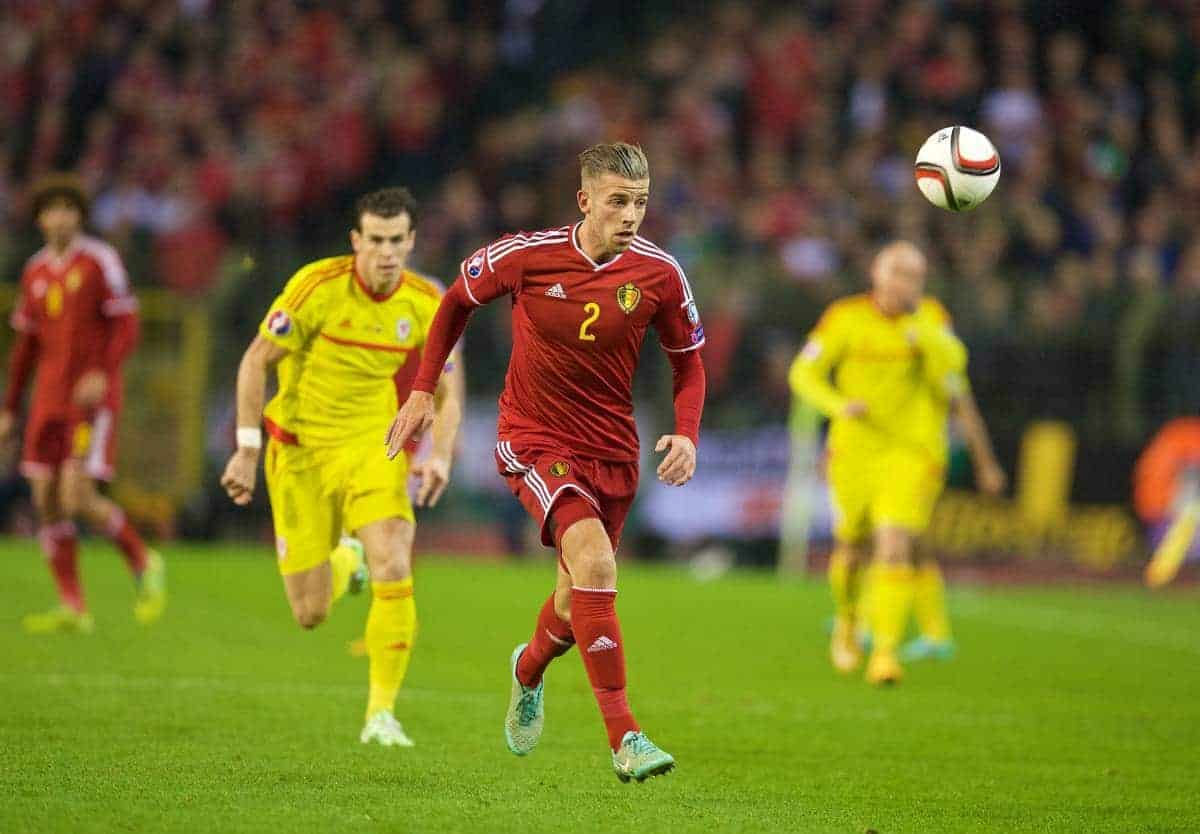 If Brendan Rodgers has learned anything this season, it’s that he needs another centre-back or two. Jack Lusby selects Toby Alderweireld among five options.

Liverpool’s 0-0 FA Cup quarter-final draw at home to Blackburn Rovers underlined many things for the Reds after an arduous fixture schedule—not least a lack of depth in the centre-back positions.

With Emre Can moving into midfield to cover the absent Joe Allen, Mamadou Sakho still not yet at full match fitness, and Martin Skrtel suffering a head injury in the first five minutes of the tie, Brendan Rodgers was forced to field a back three of Glen Johnson, Kolo Toure and Dejan Lovren.

The trio kept a clean sheet but looked far from the accomplished defensive line that Can, Skrtel and Sakho have offered in the 3-4-2-1.

Furthermore, with Toure and Johnson potentially leaving this summer, Liverpool look decidedly short in the centre-back ranks—even if the on-loan Andre Wisdom and Tiago Ilori return to the fold next season.

Here are five centre-backs Liverpool should target this summer.

Skrtel’s withdrawal through injury on Sunday, and Liverpool’s shaky performance in the aftermath, outlined exactly why Rodgers must bring in another central defender this summer.

Unfortunately sidelined at present, N’Koulou has played an integral role in Marseille’s challenge for the Ligue 1 title this season—Marcelo Bielsa’ side currently sit third, four points behind leaders Lyon.

Comparing N’Koulou and Skrtel directly offers a clear reflection on their similarity:

(Note: Statistics, via WhoScored, based on averages per league game this season.)

Furthermore, currently under the tutelage of pressing advocate Bielsa, N’Koulou would fit in well with Rodgers’ high-intensity system.

When considering Schalke centre-backs, the name that often crops up is German utility man Benedikt Howedes and, while he would be a great signing for Liverpool, a more suitable option for Rodgers this summer would be teammate Joel Matip.

After recovering from a foot injury that ruled him out for much of the first half of the season, Matip has regained his place in the Schalke back four, and impressed in 12 games so far.

Last summer, after Matip shone alongside N’Koulou for Cameroon at the World Cup, Bleacher Report’s Allan Jiang outlined his potential:

“He is mobile, a solid tackler, cuts off passes and is superlative in the air. At 22 years of age, Matip has time to develop into an elite footballer either in defence or in midfield.”

Uninhibited by injury last season, Matip made 2.5 tackles, 2.4 interceptions and 4.3 aerial duals per Bundesliga game on average, with all three records higher than any Liverpool centre-back this season.

Still a fairly raw prospect, Matip could be a supreme addition in a central defensive role for Rodgers.

If Toure does depart Merseyside this summer, he can still be considered a relative success at Liverpool, largely due to his free-transfer signing—a low-risk option, Toure has impressed.

Another low-risk signing this summer, with a much higher potential upside than the ageing Toure, would be Fabian Schar, of this season’s Champions League opponents FC Basel.

With Schar’s contract set to expire this summer, the centre-back will be one of the most attractive transfer prospects ahead of the 2015/16 season.

Quick, strong and aggressive, the 23-year-old has all of the qualities to excel in the Premier League.

Furthermore, with Schar deputising at right-back at times for Basel in the past, and with 0.5 dribbles per Champions League game on average this term, this suggests he could perform in the regular right centre-back role that Can could vacate next season.

Missing the majority of last season with a serious injury, Jores Okore has returned to the Villa side this term and outlined just why he was considered so highly prior to his move to Villa Park.

Before his move, and following an impressive display despite Nordsjaelland’s 4-0 loss to Chelsea in the Champions League, Danish compatriot and Premier League alumni Peter Schmeichel perfectly outlined Okore’s attributes:

“We’ve always known he was quick, we’ve always known the strength. He’s good in the air, we’ve never seen him on this stage before at this level, and the way he played today was a big surprise for me, that he could actually pass the ball as he did and take part in open play.”

Okore has continued this with a regular berth in the Villa defence this season.

Furthermore, right-footed Okore has averaged 0.3 key passes (KP) and 0.5 dribbles (D) per game, just slightly less than Sakho (0.3 KP, 0.6 D), suggesting that a role at right centre-back would suit him.

It would be a gamble, but Okore has the potential to develop into a top-class centre-back.

In order to replace the departing Lovren, Southampton manager Ronald Koeman was able to convince Atletico Madrid to loan them Belgian stopper Alderweireld—after an impressive season so far at St. Mary’s, Alderweireld should be on Rodgers’ wish-list.

On the face of it, Alderweireld perfectly suited to Liverpool’s current back three system, with the 26-year-old as comfortable in possession as he is in the defensive sector.

Alderweireld has made an average of 0.3 key passes per league game this season, as many as Sakho for the Reds, and Southampton have conceded just 0.63 goals per game with him in defence, compared to 0.83 without him.

Furthermore, with Alderweireld able to cover in defensive midfield, and excelling in that position at times for Southampton this season, this outlines his ability to step out of defence into midfield.

This versatility would make Alderweireld an ideal right centre-back for Liverpool.

Which centre-backs should Liverpool sign this summer? Let us know in the comments below.