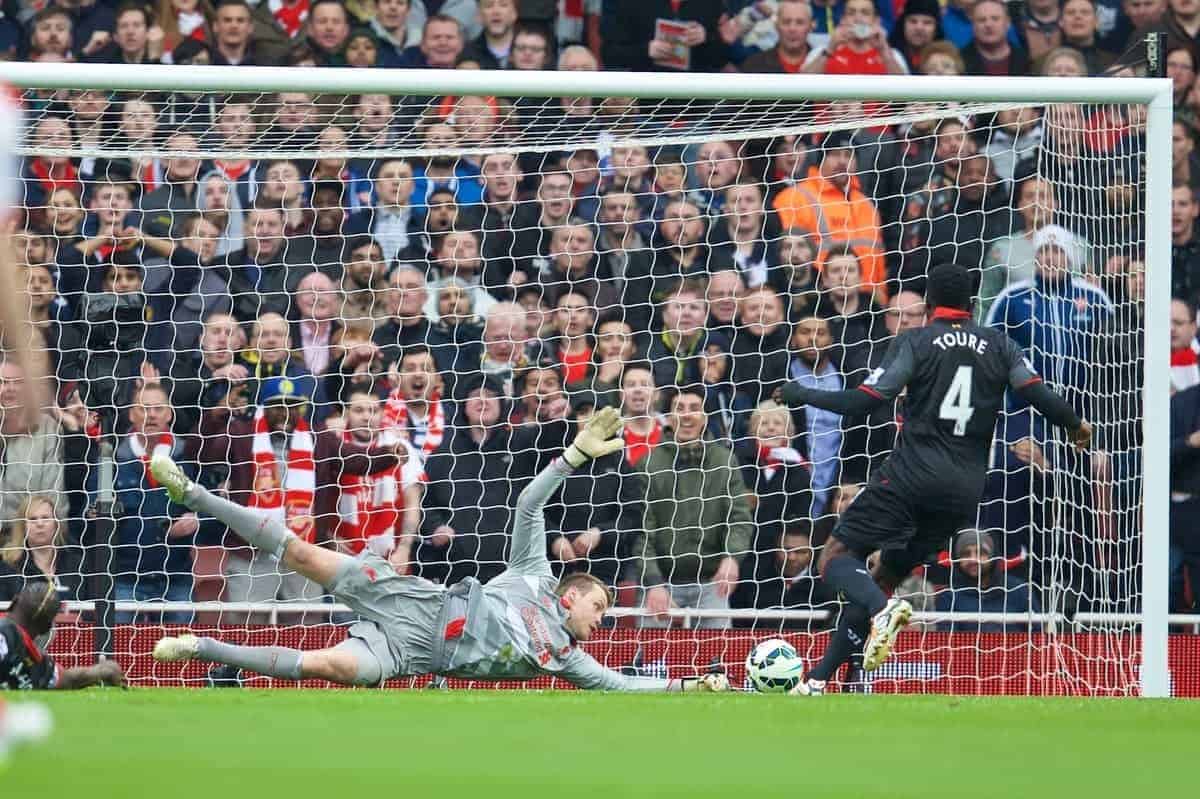 Liverpool’s 4-1 defeat to Arsenal was the lowest moment of the season so far, but how did each Reds player rate on the day? Here’s our assessment – you can submit your ratings at the bottom of this page.

The Belgian was one of the very few Liverpool players to come out of the game with any credit, making several terrific saves to deny Santi Cazorla, Aaron Ramsey and Olivier Giroud.

The 27-year-old was beaten too easily for Mesut Ozil’s free-kick though, having needlessly stepped to the left before being beaten on his strong side.

The 21-year-old was one of the Reds’ better outfield players, performing solidly at both centre-back and wing-back.

His needless sending off late on was extremely stupid though, and means he will now miss the FA Cup quarter-final replay with Blackburn in midweek.

Toure produced one of the worst individual performances by a Liverpool player in many years, and looked completely out of his depth from start to finish.

The Ivorian lost the ball time and time again, his decision-making was appalling and he was a complete liability to his side. Nowhere good enough from the likeable veteran against his former club.

Mamadou Sakho has completed 96% of his passes and won 100% of his aerial duels so far. pic.twitter.com/AiIgaLxmxu

The Frenchman looked shaky in the early exchanges, but he recovered well to show once again why he is regarded as such a formidable defender.

His use of the ball was typically excellent, and while others around him floundered, he did his job well on the whole.

After an impressive run of form of late, Allen produced an insipid performance more in-tune with his early days at Anfield.

The 25-year-old gave the midfield no presence whatsoever, and he neither passed the ball effectively or defended as well as he can. Very disappointing.

Lucas is having a nightmare.

The only saving grace for Allen was that Lucas was even worse. The Brazilian returned from injury and looked well off the pace from start to finish.

The 28-year-old’s passing was horrendous at times, and he looked extremely ponderous and slow throughout. The kind of performance that makes you question his future.

The Spaniard has had an up and down time of things during his first season as a Liverpool player, and this was another game in which he flattered to deceive.

He was at fault for Hector Bellerin’s opener, allowing him to get past him embarrassingly easily, and although he made a couple of surging runs and well-timed tackles in the second-half, the damage had already been done.

The captain on the day was used at right wing-back for much of the game by Brendan Rodgers, but he never looked happy there.

His pace and dynamism was missed in the middle of the park, and his general passing, shooting and decision-making was far from its best. Scored Liverpool’s goal from the penalty spot.

Markovic was given a surprise start by Rodgers, but he never stamped his authority on the game prior to his second-half substitution.

The youngster had a wonderful chance to set-up Raheem Sterling with the score at 0-0, but fluffed his lines with a shockingly over-hit pass.

The Brazilian had an off day against the Gunners, failing to influence proceedings and cutting a rather frustrated figure at times.

Too often the 22-year-old was guilty of not playing the easy ball, and he was also caught on the ball a disappointing amount. Looks to be running out of steam.

Sterling has been in the headlines all week, and although far from his best, he was still his side’s most dangerous attacking player by far.

The Englishman grew as the game went on, particularly when used on the left, hurdling tackles and winning the consolation penalty that Henderson dispatched. A fairly decent response given the negative press he has received.

The 25-year-old tried to be too clever too often, and still looks well short of his best. The Reds boss has to be blamed for a number of selection errors. He wasted Henderson by playing him as a wing-back, and starting Toure, Lucas and Markovic, all of whom have not featured much of late, was madness in such an important game.

Taylor was correct in awarding the penalty and sending off Can, but could easily have dismissed Bellerin for his foul on Sterling in the box, and Mathieu Flamini for a stamp on Allen.