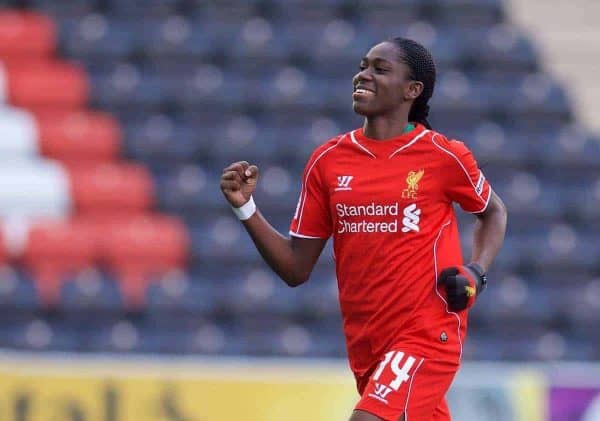 The Nigerian striker scored a goal and created the winner for Line Smordsgard in 2-1 win against Manchester City Ladies on a sunny Sunday afternoon at the Select Security Stadium in Widnes.

The Reds started the game at a fast pace to show that despite the away defeat against Chelsea, they will not give up the title without a fight.

Both teams made a bright start to the game. On-loan Everton player Nikita Parris caused danger to the Reds’ defence along with her former blues teammate Toni Duggan. But it was Liverpool who took the lead at the early stage of the game.

A quick counter-attack from LFC Ladies came with the result of a corner for the Reds. Fara Williams delivered the ball from the right side, but it was deflected for another corner. Another delivery from Williams found Oshoala who did not have any problems to put the ball into the net from close range after goalkeeper Alex Brooks’ error.

But the did Citizens equalise in the second half. A free-kick taken by Isobel Christiansen found Nikita Parris, who unmarked scored a decent header beyond the reach of Libby Stout. City could have gone in front just a minute later, but Christiansen shot just over the bar.

After the quick attacks from Man City it was Matt Beard’s side who took control of the game. On 57 minutes The Reds scored and it was Smorsgard who headed her first goal in red shirt to make it 2-1. A vital point in it had Oshoala who produced a great cross which found Norwegian.

Liverpool did not stop to find a third goal and it nearly happen after amazing team effort. Smorsgard found Fara Williams who played a great one-two with Oshoala, but the shot from England midfielder went straight into the arms of Brooks.

The Reds continued to create chances as Martha Harris crossed the ball into the penalty area to find Smorsgard, but Norwegian ace missed the target.

The big win for LFC Ladies was secured on the final whistle and Gemma Bonner spoke to This Is Anfield post-match.

“It was a good performance from us and I am absolutely delighted with the three points,” said the Liverpool captain.

“We showed character in the second half after the Man City equaliser, we scored the second goal and held on until the end and it’s a big credit to the girls.”

Bonner praised the new signings, such as Oshoala, who are settling in at the club well.

“Our new players were the bright points of the game. They’ve settled well already.

“Line scored the first goal tonight and Asisat was on the scoresheet again. We are delighted for them as a team and we hope it will build the confidence for the last game before the break before the World Cup this year.”

The WSL season now breaks for the World Cup and Bonner is keen for England to progress and says there is no reason why Three Lionesses cannot be successful in Canada.

“We have great young players in the squad. We were unbeatable in the qualifiers. Winning the World Cup and then defending the title with LFC Ladies. This is definitely my plan.”