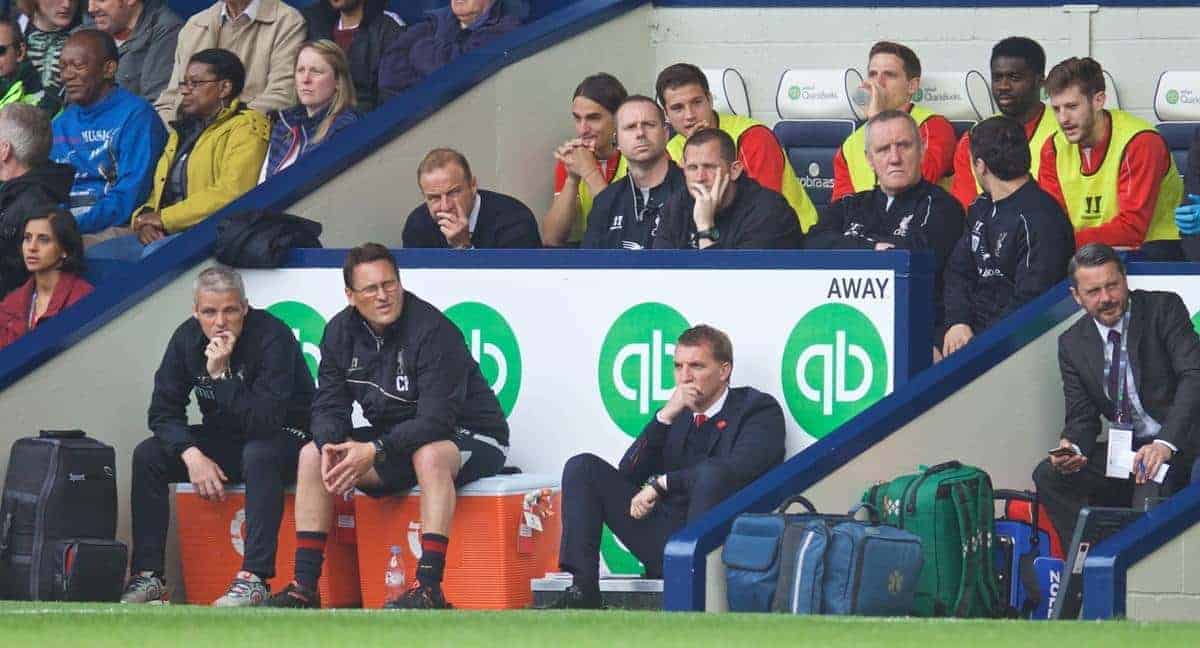 Brendan Rodgers is coming under increasing pressure as Liverpool manager following his side’s 1-0 defeat to Hull City on Tuesday, and a past quote has once again made him look foolish.

Trace your mind back to the middle of the March, when Liverpool’s 1-0 victory over Swansea put them within four points of second place in the Premier League. That may feel like a lifetime ago, but it really has only been six weeks.

In his post-match interview, Rodgers declared that his side could finish closest to champions-in-waiting Chelsea come the end of May.

“Manchester City‘s result at the weekend (a 1-0 defeat to Burnley) gives us an opportunity to finish second,” he said.

“Our mentality, the run and confidence we have at the moment we’re just going to take that into every game and see where it takes us.”

Rodgers claimed last week that he doesn’t get carried away when we win. This proclamation of targeting second shows otherwise.

Unfortunately for Rodgers, those words have come back to haunt him, with the Reds’ season capitulating in embarrassing style ever since that scrappy 1-0 win at the Liberty Stadium.

First up was the visit of Man United at Anfield; a game that many felt was pivotal in the race for a top-four finish, and one that Liverpool were favourites to win.

Both Rodgers and the players froze on the big occasion though, showing not for the first time that his young squad remain mentally weak when it comes to the crunch matches.

The 4-1 humiliation at Arsenal then followed, with Liverpool 3-0 down at half-time and fortunate to only lose by a three-goal margin in the end. Spineless doesn’t do it justice.

A gritty 1-0 win at Championship side Blackburn Rovers in the FA Cup – hardly something to get too giddy about – and a 2-0 victory over a gutless Newcastle team gave brief hope, before Aston Villa awaited in the FA Cup semi-final at Wembley.

Where's the inspiration from Brendan Rodgers? Really hate to call his future into question, but he's not helping himself at all.

The performance that day was arguably the most disappointing of the whole season, given the game’s significance, and Rodgers had a shocking day at the office.

The defeats to United and Arsenal were massively disappointing but not huge shocks, whereas the loss to Tim Sherwood’s side really did feel inexcusable. From that point on, Liverpool’s season has gone as flat as a pancake.

The 0-0 draw with West Brom on Saturday was a game that felt tough to stay awake watching, while Tuesday’s miserable defeat to Hull was the final nail in the Reds’ 2014/15 coffin.

This horrible run of form has not only put Rodgers’ job in real danger, but it has also further damaged his reputation as a man who loves the sound of his own voice.

The 42-year-old has been derided by many rival supporters for his David Brent-esque style in interviews, ever since the toe-curling documentary ‘Being Liverpool‘ was released in 2012.

Although for a time it all just seemed like rather exaggerated, perhaps even jealous, mickey-taking, Rodgers is now becoming more and more cringe-worthy by the week.

As we perfectly pointed out last week, “the hyperbole that he (Rodgers) delivers on a weekly basis is helping nobody, not himself and certainly not the young players he overly lavishes praise upon.”

First season you could see a clear philosophy, last season was just brilliant but this season we are poor and lack any sort of identity.

Rodgers is a very talented young manager, regardless of what many will tell you right now, but his constant use of the word “outstanding”, among other trademark weekly phrases, is turning him into something of a joke figure.

You can’t help but feel that if the Northern Irishman just combined the obvious talent he has with a more restrained ego, he would be receiving far less criticism. He is making a giant rod for his own back.

At the moment, Rodgers has the feel of a stereotypical embarrassing dad about him. You find yourself listening to him in fear of what will be said next, while rival fans laugh their heads off.

Does he stay or does he go?

So much is being said about the future of Rodgers, with a growing number calling for him to be sacked as Liverpool manager at the end of the season.

I, personally, remain a fan of his in general, and still feel he deserves another season. The Hull performance certainly came very close to swaying my opinion, however.

Despite my fondness towards him as a young coach with bags of potential, Rodgers could not complain if he was sent packing by FSG before the start of next season.

It has been a very poor campaign on the whole, with poor signings, unacceptable Champions League performances, big-game meltdowns and baffling tactical errors all playing their part.

It’s worth stressing that it hasn’t all been bad, however, and Rodgers does have some genuine excuses to make for Liverpool’s failings.

The departure of Luis Suarez was always going to hit the team hard, given the fact he is the finest striker on the planet right now, while Daniel Sturridge‘s injury woes have also been hugely damaging.

Adam Lallana has never been fully fit at any point, while young signings like Lazar Markovic, Alberto Moreno and Emre Can were always going to take time to settle.

The 13-game unbeaten run in the Premier League, after Rodgers decided to adopt a 3-4-2-1 formation, was an inspired piece of management, and outlined the ability he does have at his disposal.

There have clearly been more bad moments than good though, and that is why his position is so uncertain right now.

If Rodgers does stay in the Anfield hot-seat beyond the summer, he will know that 2015/16 is very much make or break for him.

Keeping his inflated ego in check and not making overly bold predictions will go some way to winning over his ever-growing number of critics.

Would you sack Brendan Rodgers this summer? Let us know in the comments below.