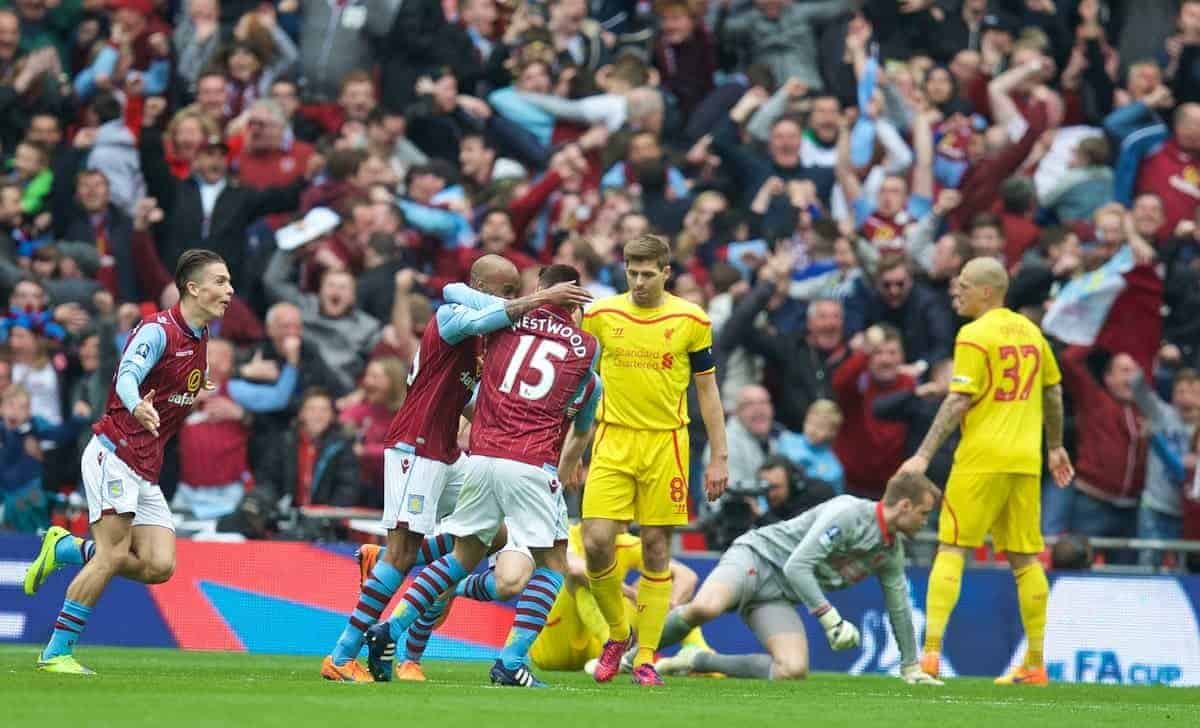 The Belgian made a decent early stop to deny Charles N’Zogbia, but other than picking the ball out of the net twice, he was actually rarely tested.

The 21-year-old certainly gave it his all, and didn’t seem to be as affected by the occasion as some of his teammates, but he was still way short of his best.

His touch seemed a little heavy at times, and he was a little out of position for both Villa goals. Never got going at centre-back, right-back or in midfield.

Skrtel’s return was welcome news for Liverpool, and although, like Can, he’s enjoyed better matches, he was solid on the whole. Given a tough 90 minutes by the excellent Christian Benteke.

The 25-year-old had another forgettable afternoon in a Reds shirt, with his brain-dead stoppage-time shot summing up his wretched season to date.

He allowed Benteke too much space for their first goal, and just never really showed authority at any point. Made a few decent blocks.

The young Spaniard had a typically inconsistent game. He made a superb last-ditch tackle to deny Benteke in the second-half, but his crossing and use of the ball was invariably poor.

Allen divides opinion more than any other current Liverpool player, and this was a display which won’t help him win any new admirers.

The 25-year-old was virtually anonymous throughout, barring the odd tackle here and there, and was completely bossed by the likes of Fabian Delph, Jack Grealish and Tom Cleverley. Replaced after 78 minutes.

Henderson was just as quiet as Allen, and had one of his worst games of the season, when his team really needed him to come to the fore.

The vice-captain offered little quality in the middle of the park, and was part of a midfield totally overrun from start to finish.

Markovic struggled hugely to get into the game at both wing-back and then further forward, before being substituted for Mario Balotelli at half-time. The jury is out on the young Serb.

Having been recalled to the side following suspension, much of the pre-match talk was of Gerrard inspiring his side to another FA Cup final. That completely failed to materialise, sadly.

The 34-year-old was barely seen in the opening 45 minutes, and although more involved in a deeper role after the break, his lack of legs was a real problem all afternoon. A weak-link.

The Brazilian was once again his side’s standout player, but this was far from vintage Coutinho. He gave Liverpool a brief lead, via a hefty deflection, but he never really stamped his authority on proceedings.

The 20-year-old’s pace and trickery always looked a threat, but barring his assist four Coutinho’s goal, no end product ever really came from it.

Sterling remains a very raw footballer, and his finishing needs huge amounts of work done on it. Perhaps we expect a little too much of him, but a better performance was required.

The controversial Italian did at least look a threat when he came on, holding the ball up well and showing good pace and power, but time and time again he was needlessly caught offside.

Only on the pitch for stoppage-time.

This was an extremely poor day for the Liverpool manager, as his team produced a woeful performance.

He changed the system several times throughout, with all of them failing, eventually playing Gerrard in the defensive midfield role he was so poor in earlier in the season.

Too many players appeared to be playing out of position, which is a damning indictment of his summer business last year. Square pegs in round holes springs to mind.

Claiming Gerrard was “excellent” after the game was laughable, but at least he correctly admitted the Reds were second best.

Oliver had a solid game, and didn’t appear to make any noticeably poor decisions.