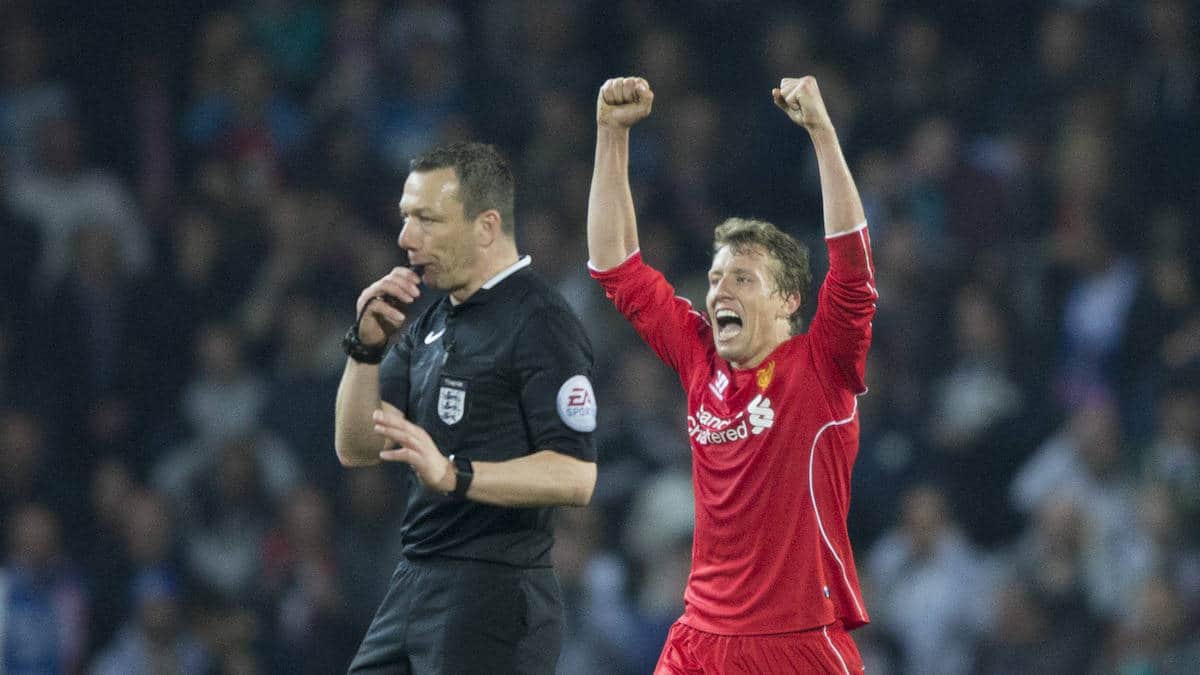 Liverpool midfielder Lucas Leiva is relishing the prospect of a long-awaited Wembley appearance after injury robbed him of the chance three years ago.

The Reds made three trips to the national stadium in 2012 after winning the League Cup and losing the FA Cup to Chelsea, but the Brazil international missed all of them with a serious knee injury sustained in the previous November.

But having played his part in the 1-0 quarter-final win at Blackburn, Lucas is hoping to get his chance in the last-four encounter with Aston Villa on April 19.

“Unfortunately I got an injury before we got to Wembley so I missed [the chance to play there],” he said.

“Hopefully I’ll be fit and be able to play at Wembley. I’ve never played there, so it will be a very good experience and after many years here, to have that chance is amazing.

“I think everyone could see how hard we worked. We knew it was going to be a very hard game in difficult conditions, but I think we did well and we are so happy to get to Wembley and hopefully get to the final.”

Victory over Blackburn intensified talk of the team giving captain Steven Gerrard, who departs for Los Angeles Galaxy, the perfect send-off as his birthday falls on the day of the final.

However, the midfielder was suspended for the tie at Ewood Park and it was Lucas’s compatriot Philippe Coutinho who made the difference with a 70th-minute strike, having scored a brilliant last-minute winner in a fourth-round replay at Bolton.

Coutinho has arguably been Liverpool’s best player over the last five months having not only finally seemed to have grown in stature as a playmaker but also adding goals to his armoury.

“I have known him for a very long time and I know what he’s capable of doing,” Lucas told liverpoolfc.com.

“He’s becoming an even bigger player for the club and he’s got a long way to go in terms of age and experience, but he’s already right there with the top players.”

Another player whose form has taken a significant upturn during that period is goalkeeper Simon Mignolet, who produced two excellent saves to keep a clean sheet against Rovers and even stopped opposite number Simon Eastwood scoring what would have been the most dramatic of equalisers after the Rovers keeper came up for a throw-in in added time.

The Belgium international has overcome his early-season wobbles when he seemed to be the cause of much of Liverpool’s defensive frailties. He admits victory over Blackburn was important after back-to-back Premier League defeats put a huge dent in their Champions League aspirations.

“After the result against Arsenal there wasn’t much time to think because we knew there was going to be a game on Wednesday,” Mignolet said.

“So we had to recover well, put the focus to Blackburn and then make sure that we did the things we wanted to do.

“I think the lads and the team responded really well, did their jobs and did what the gaffer asked us to do, and we managed to get the result we wanted.

“We needed to bounce back after two disappointing results against Manchester United and Arsenal and we did that.

“We gave something back to the fans, who have got something to look forward to now as well with a trip to Wembley.

“They stand behind us at every single away game, they turn up in numbers and it’s always nice to play in front of that crowd.

“They pushed us forward and they have something to look forward to now with a big game at Wembley. Hopefully we can get to the final as well.”

As a result of Liverpool’s semi-final involvement their league match at Hull scheduled for that weekend has been rescheduled for Tuesday, April 28 at the KC Stadium.