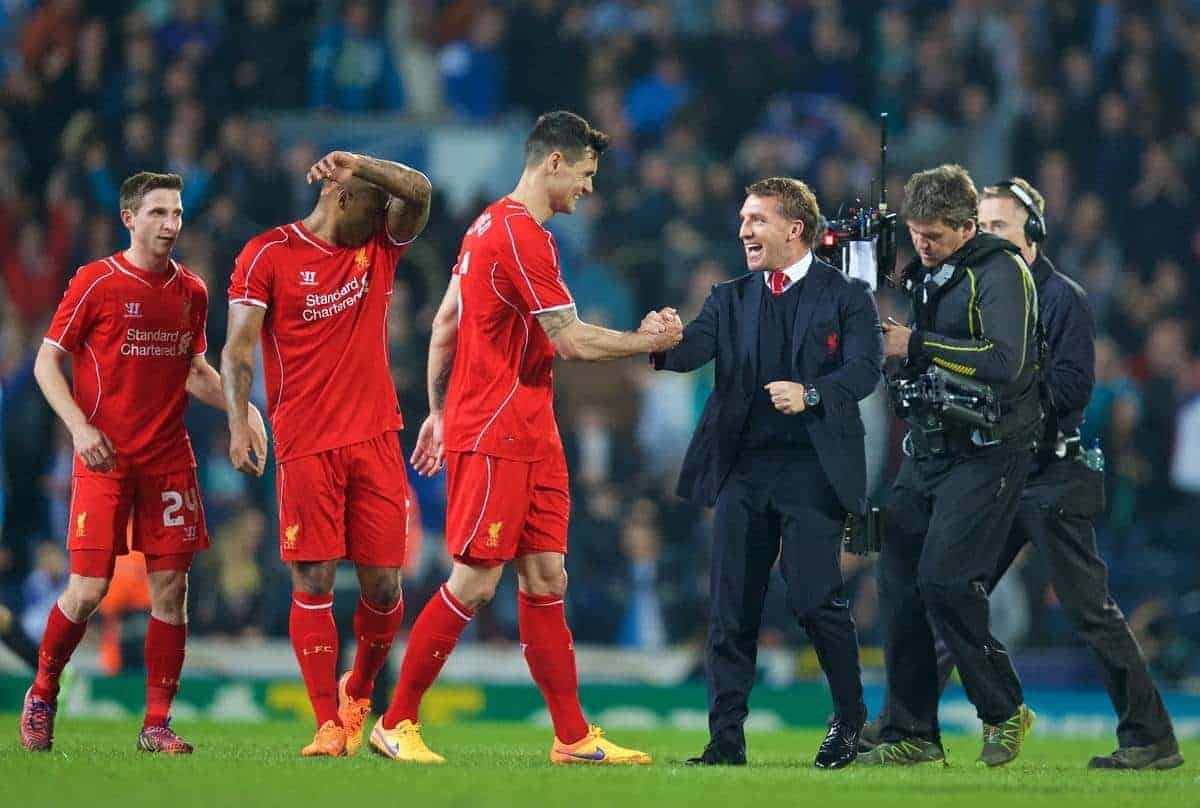 Liverpool booked their place in the semi-finals of the FA Cup where they will take on Aston Villa at Wembley on April 19th, thanks to Philippe Coutinho’s excellent 70th minute strike.

A clever one-two exchange with skipper Jordan Henderson put the Brazilian in on goal, and he made no mistake as he fired hard-and-low superbly into the bottom corner of the net via the inside of the post to send the 7,200 travelling Reds wild.

It was a well-deserved win against Gary Bowyer’s side on the bobbly Ewood Park surface ensuring the Reds will make their first trip to ‘Anfield South’ for the first time under Brendan Rodgers’ guidance, and here are the discussion topics from a morale-boosting win.

On a night where the Reds needed to stand up and be counted, the Belgian stopper did just that as he turned in another superb display between the sticks.

Continuing his incredible turnaround in form, Mignolet proved a huge factor behind Liverpool reaching Wembley as he once again made big saves at big moments in the match keeping the determined Rovers at bay, and the Belgium international will deservedly claim plaudits for a number of superb stops including a match winning 93rd minute one from Rovers stopper Simon Eastwood.

Alongside shot-stopping, the ‘keeper dealt convincingly with the aerial bombardment faced as the home side slung numerous high balls into the box – especially second half – and the 26-year-old punched solidly and cleared his lines well amongst bodies flying in and under intense pressure.

Most importantly though, Mignolet provided a composed figure behind an unfamiliar back four and his assured and composed manner undoubtedly helped settle the makeshift defence, who performed surprisingly well safe in the knowledge that they had the controlled and commanding figure of an in-form stopper behind them.

All eyes were on the Liverpool defence following Rodgers’ switch back to a four man back line, and credit must go to the unfavoured four who rose to the challenge on a testing night at Ewood Park.

With injury to Mamadou Sakho meaning Kolo Toure had to come on after just 27 minutes, an extremely suspect defence took shape leaving Reds everywhere fearing the worst against the direct Rovers, but the second choice options and Alberto Moreno produced an impressive display – keeping an extremely welcome clean sheet.

Rodgers "Lovren has not been in the team but he was outstanding, Glen Johnson has not played a great deal. Those two were outstanding" #LFC

At right back, the much-maligned Glen Johnson turned in his most solid defensive performance in a long time and the experienced full-back was reliable in possession – recording the highest pass accuracy of any Red on the night with 91.4% – alongside contributing well to the attack on the occasions he did venture forward, making one key pass and registering two shots on target.

Alongside Johnson, Dejan Lovren and Toure formed a solid centre back partnership in a physical encounter and the pair impressed hugely with the commanding nature of their defending – making 17 clearances and three interceptions between them – especially the Croatian who attacked the ball excellently all night making and won the most aerial duels of any defender.

For the first time, Lovren looked like the defender we thought we were getting. Calm & composed – more please! #LFC.

Having been thrown together as a result of injuries and suspensions and with little faith shown in them, the defenders deserve credit for their resilience and determination on a challenging evening.

The topic of on-going discussion for off-the-field reasons, Sterling showed his focus is firmly on the field currently as he turned in a whole-hearted performance.

Playing on the left of the front three, the 20-year-old was Liverpool’s biggest attacking threat on the night – displaying good movement alongside a positive and direct display – and though shooting was wayward and he wasn’t involved in winning goal, Sterling certainly provided a huge injection to the Reds forward play with his directness.

The youngster was brave, picking the ball up often with two and sometimes even three men around him but it didn’t put him off as he continued to carry the fight throughout – shown as he embarked on more dribbles than anyone on the night (7) – despite coming in for some rough treatment at times alongside attempting to spark Sturridge into life.

As well as leading the attacking charge, the England international never stopped working or shirked his defensive responsibility, as he pressed high when able to and competed bravely all evening in a running battle down the left with Rovers full-back Adam Henley, who Sterling tracked backed time and again and ensured his opponent would not cause danger in the final third as the home side chased the game.

While understandably coming in for criticism for off-field issues, Sterling certainly deserves praise for his professional and committed performances despite the continued furore.

A night of many positives threw up one negative in particular with Daniel Sturridge, whose prolonged failure to return to form continued on an ineffective night in Lancashire.

All evening long, the 25-year-old’s usually immaculate touch evaded him at key moments contributing to the breaking down of attacks in promising positions – shown by him racking up the most unsuccessful touches of anyone on the pitch (5) as well as being disposed the most – and he seemed on opposite wavelengths to Coutinho and Sterling who struggled to link play with the striker.

Sturridge was largely restricted to half chances and speculative efforts as a result – of which one he went close with in the first half firing narrowly over the bar with a curling strike – and as a disappointing night unfolded, his lack of form looked to be very much on his mind as he cut a frustrated figure spearheading the Reds attack.

Another poor night was summed up when he missed a glorious chance to wrap up the game just minutes before he was rightly replaced by Rickie Lambert, and Sturridge certainly has a lot of work to do to recapture performance level’s that have come to be expected.

After the disappointment of crushing back-to-back league defeats against rivals Man United and Arsenal, Wednesday’s victory delivers a timely morale boost to the whole of the Liverpool squad.

Henderson: We really did (need that). Everyone has been disappointed with last couple of weeks with performances and results.

While not the most spectacular of displays, the confidence attained from a resilient, resolute and hard earned victory in a game that always promised to be tougher than seemed in theory cannot be underestimated, with the whole team from back to front having contributed to the success as Henderson acknowledged post-match.

The lift given from the battling victory could provide the catalyst for one last surge for a top four finish over the final seven Premier League games with the gap from fourth placed Man City at seven points with a derby match for them against United up next; should results be kind and Rodgers’ side overcome Newcastle, it could be game on again.

Yes it's only Blackburn, but you can't under estimate importance of that win! Dogged performance but great reaction to last 2 games. #LFC.

Taking form and positivity forward to Wembley in 11 days’ time against Tim Sherwood’s improved Aston Villa side is vitally important, and Wednesday’s win could yet prove to be the decisive factor in the Reds rescuing the season.

Next up for Liverpool is a Monday night clash against Newcastle at Anfield where they’ll look to build on the cup victory on their return to league action.