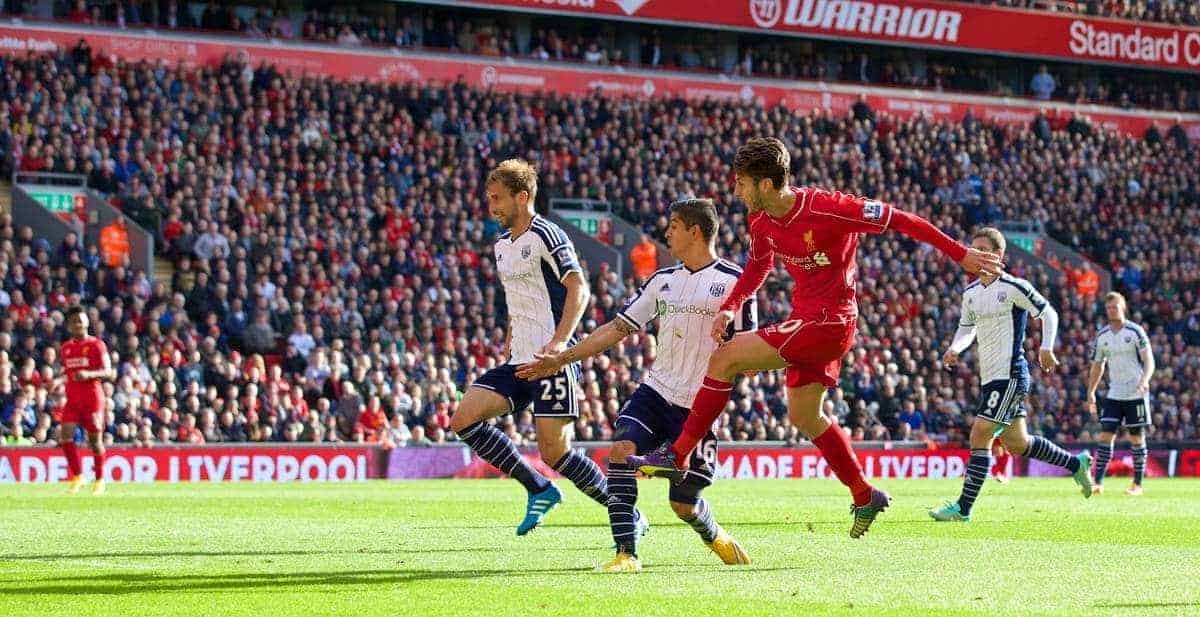 Brendan Rodgers’ Liverpool return to Premier League activity on Saturday afternoon when they take on West Brom at the Hawthorns. Ben Twelves discusses the team selection options available to the Reds boss ahead of the clash. Liverpool attempt to move swiftly on from last Sunday’s poor showing at Wembley by returning to winning ways immediately against Tony Pulis’ side. The Reds are looking to prolong the race for a top four place and at least finish the season in positive form.

With only the slim chance of Champions League qualification left to compete for, it’s now about restoring pride for the dejected Reds alongside producing strong performances and results over the final six matches to keep the pressure on those above in case of an unlikely slip-up.

Rodgers: "We want to finish the season strong and take that momentum into the following season. We have to fight for top 4 until very end."

Currently trailing Man City by seven points but with the advantage of a game in hand, Liverpool still have an outside chance of a top four finish and while the possibility is there, Rodgers’ men must put previous disappointments aside and embark on one last push beginning against the Baggies, who have suffered four defeats in their last six league matches.

The Reds have little to lose and everything to gain and with that and the vast number of woeful performances last Sunday in mind, Rodgers could make some alterations to his side for the visit to the Hawthorns – a ground the Reds boss has tasted victory at only once in three visits.

Liverpool will once again be without injured trio Mamadou Sakho, Lucas Leiva and Daniel Sturridge who all remain sidelined, but Rodgers is set to welcome back Jordon Ibe – who was undoubtedly missed at Wembley – and Adam Lallana to match-day involvement after the 26-year-old returned to training this week.

A number of poor performances last time out could tempt the Liverpool boss into re-shuffling his team, but that won’t include introducing Jon Flanagan to the side with the local lad still well short of match fitness despite having returned to full training.

Glen Johnson could be one of those recalled though and Javi Manquillo will also be hopeful of the chance for his first action since February. Should one of the right-back duo come back in, Emre Can could move out of the back four and into a natural midfield role where Jordan Henderson, Joe Allen and Steven Gerrard are all competing for starting shirts.

The Reds are full of attacking midfield options following the comeback of Lallana and Ibe – with the teenager a possibility to come straight into the starting XI – but striking options are limited again with Sturridge’s unsurprising absence. Raheem Sterling could lead the line once more should Rodgers opt against affording Mario Balotelli the chance to build on a positive Wembley showing.

Despite a whole host of formations failing to bring an upturn in performance for the Reds against Aston Villa, Rodgers is likely to choose between utilising the 3-4-2-1 system and opting for a 4-3-3 shape.

Deploying a back four could be the way to rid some underperforming players from the team and should the Ulsterman decide to go with the 4-3-3 system, two changes to the starting XI could materialise as a result.

Dejan Lovren’s continued dreadful form should see the Croatian make way with Johnson coming in, and Steven Gerrard’s struggling legs should see him replaced by Ibe, who should start in a youthful and pacey three man attack alongside Lazar Markovic and Sterling.

Those two changes would see the Reds take to the Hawthorn’s surface looking like this: However, Ibe’s return could prove a key factor in persuading Rodgers to stick with 3-4-2-1, where the teenager should operate from the right wing-back position – replacing Markovic – which would allow Emre Can to play in the back three.

With Markovic benched, Gerrard could continue in the front three ahead of the available-again Lallana, where the 34-year-old could again line up alongside the Coutinho and Sterling to form the Liverpool attack.

Those alterations and system switch would see Liverpool’s line up looking like this come 3pm kick-off time on Saturday: Rodgers: "If other clubs make mistakes then we have to ensure we're ready to take advantage."

The Reds are now in a position where they have little to lose and everything to gain over the six remaining fixtures, and while that is the case, Rodgers’ men must make sure that they are as strongly positioned as possible to capitalise on any slip-up from those above, making a win on Saturday a necessity.