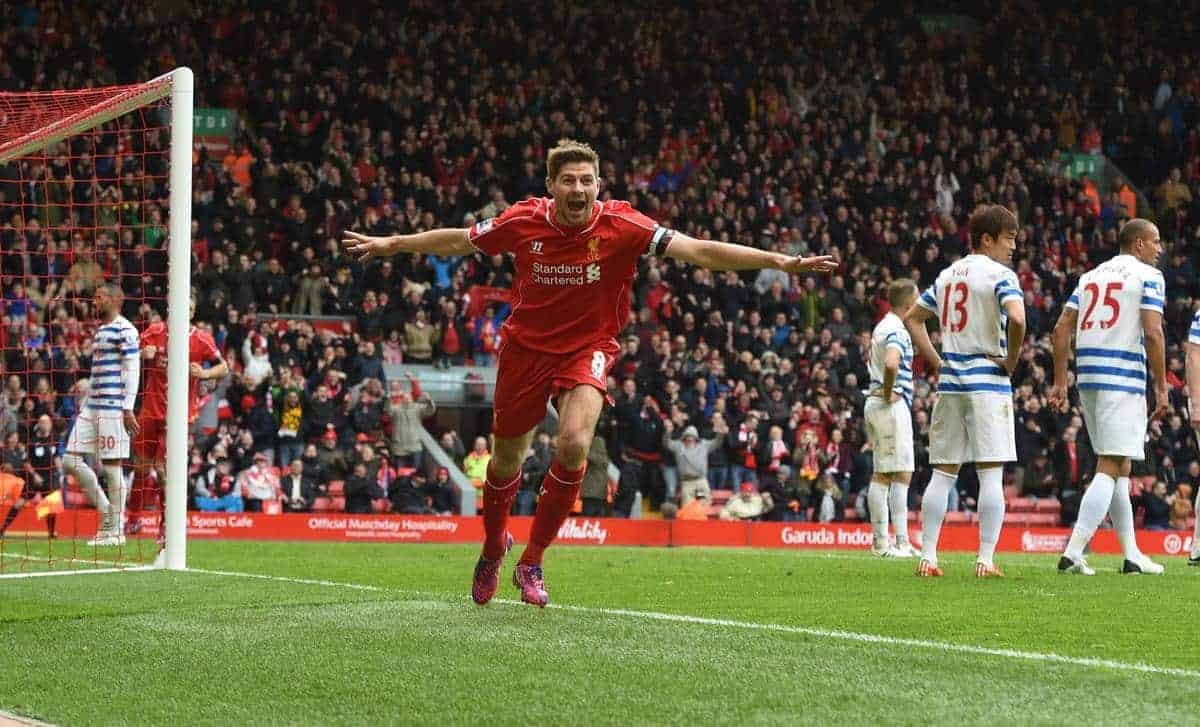 Goals from Philippe Coutinho and Steven Gerrard earned Liverpool a late 2-1 victory over QPR at Anfield on Saturday, but how did each individual perform on the day? Henry Jackson marks the Reds out of 10.

The 27-year-old once again performed well, as he continues to look a completely different player to the man who was such a liability earlier in the season.

He made a good stop to deny Leroy Fer in the first-half, and his decision-making throughout the game was spot on. He was rarely tested though.

Can enjoyed a solid but unspectacular afternoon, but once again showed that he will never excel when deployed as a right-back.

The German’s use of the ball wasn’t always as good as it can be, and his general influence just didn’t quite come to the fore like we know it can. He did win an impressive 71 per cent of his duels, however.

The 30-year-old’s form has been largely brilliant since Christmas, but this was one of his less effective performances in recent months.

He missed a good chance in the first-half, and will be frustrated at the part he played in Leroy Fer’s soft equaliser. Won Liverpool’s penalty having been brought down by Nedum Onuoha.

Despite some clear improvements in recent weeks, Lovren still doesn’t really look like a Liverpool player. He struggled against QPR.

The Croatia international wasn’t particularly impressive in possession, and like Skrtel, showed suspect marking for Fer’s goal, turning his back on the volley.

Booked for a typical Lovren challenge as panic and nerves set in.

It’s easy to get on Johnson’s back at times, given his slightly questionable attitude, but he was a solid performer all afternoon.

The 30-year-old was far from great, but he showed a few decent attacking bursts and defended better than he normally does. He has certainly had worse games.

For so long it looked like another miserable afternoon for Gerrard, as has been the case over these last 12 months, but he proved to be the match-winner.

He nearly scored with a trademark free-kick in the first-half, but his late penalty miss looked fatal. He rose to head home a late winner in front of the Kop, however, in his second-last game at Anfield. His overall game was good throughout.

The vice-captain enjoyed another good day at the office, and showed how effective he can if used in more of an attacking midfield role.

His work-rate, passing and influence was noticeable from start to finish, and his wonderful cross should have been converted by Raheem Sterling. Created three chances in total.

The 26-year-old had an impressive game, especially in the first-half, and showed glimpses of why Liverpool paid so much money for his services last summer.

His link-up play with the likes of Philippe Coutinho and Rickie Lambert was eye-catching at times, although he did miss a glorious chance just after half-time. Substituted after 68 minutes.

Coutinho was once again one of the Reds’ standout performers, as he continues to show why he is now arguably his side’s best player.

The 22-year-old took his goal brilliantly, and he looked like hurting QPR whenever the ball was at his feet.

Sterling has been a million miles from his best ever since THAT interview, and he was again disappointing against Chris Ramsey’s side.

Although he showed constant endeavour, time and time again he was robbed of the ball and he missed an absolute sitter in the second-half. His 81 per cent passing accuracy is not the best.

Lambert has had a wretched time of things since his dream move to Anfield last summer, but he impressed at times against the Premier League strugglers.

He showed some decent movement in the first-half, and tested the impressive Rob Green on two occasions. Provided the assist for Coutinho’s goal.

The youngster added a spark when he came on, at a time when Liverpool had grown predictable.

Rodgers once again played Emre Can and Glen Johnson out of position, which seemed baffling, but otherwise he got his tactics fairly spot on.

It was a good decision to introduce Ibe when he did, and his attack-minded switch to a back-three late on paid dividends.

As always, Atkinson was a little whistle-happy, but he got the penalty decision right and didn’t make any glaring errors.

All statistics provided by Squawka.