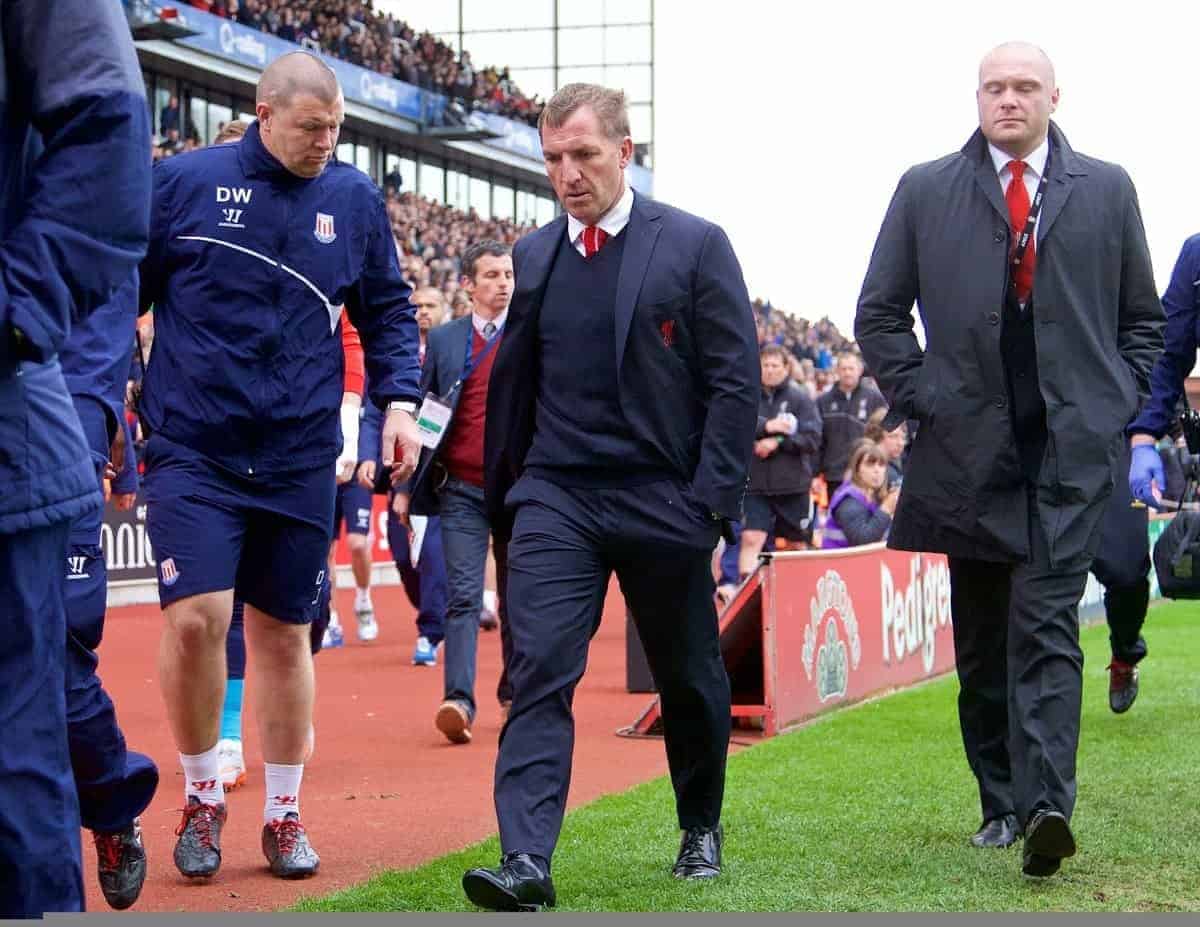 After Liverpool ended the season with an utterly disgraceful performance and result against Mark Hughes’ side, Ben Twelves picks a number of discussion topics from the Britannia Stadium. Brendan Rodgers watched on as his embarrassingly bad Liverpool side slumped to one of the most humiliating defeats in the history of the club.

A shameful first half showing saw the Reds ship five goals in the space of 23 minutes, with Mame Biram Diouf netting twice as well as Jonathan Walters and Steven N’Zonzi registering on the score-sheet for Hughes’ rampant Potters.

After a half-time reshuffle, Steven Gerrard grabbed a consolation goal and the 186th of his unrivalled Liverpool career, before Peter Crouch compounded the Reds’ misery as he made it a shambolic six with a free-header five minutes from time.

It was an inexcusable and down-right pathetic performance from players and management alike not for the first time at an unhappy hunting ground, and here are the talking points from the fixture.

In his very last appearance for the club, Steven Gerrard was once more let down badly by the embarrassing group that he calls his teammates.

Having been failed last week on his final Anfield appearance, Liverpool would surely use the failure to give their captain a positive send-off in front of his home crowd as motivation to do it in front of the 2,800 travelling Kop, but instead they turned in an even more gutless display.

It was perhaps fitting then that it would be the man himself to step forward and grab one more moment of glory, regardless of how meaningless it was, with an excellent finish across goal while surrounded by ineptitude in keeping with the majority of his incredible Anfield career.

The Captain handed one more reminder as to what Liverpool are letting depart the club – not least the team’s top scorer this season – and with no more talismanic, or rescue act figure, it really is worrying to think which direction the club is moving in and who will prevent Liverpool FC making one last step into nothingness.

Steven Gerrard has always played like he cares as much about the club as the fans – he's a one off – never see his like again. #LFC.

On a totally horrendous afternoon, second half substitute and talented teenager Jordon Ibe provided the only ray of light.

Coming on for the appalling Alberto Moreno and entering into a left wing-back role, the youngster produced a promising display as he worked hard both defensively and offensively, and he was by far the Reds most threatening outlet in the second 45 minutes.

The 19-year-old – who committed to a new long-term contract this week – showed why there is cause for genuine optimism with him in the near future as he displayed some powerful running, bravery, determination and confidence on the ball, driving at City right-back Geoff Cameron and causing the American a number of problems.

Ibe – who made two key passes and completed three dribbles as he attempted to inject attacking intent – could have won a penalty when his cross hit Walters’ hand and though he didn’t get the rub of the green on that occasion, the Reds’ most dangerous player showed real maturity in his performance – epitomised as he was the man to come out of speak to LFC TV after the horror show.

Respect to Jordon Ibe for coming out and speaking to @lfctv in the aftermath of that Liverpool defeat….big balls for a 19 year old

Emre Can Picked and Fails Again at Right-Back

It was a day that saw almost every single player endure a truly miserable game, but none more so than Emre Can who turned in the worst performance of his short Reds career.

Once again bizarrely deployed uncomfortably at right-back, the German had a torrid first half up against Marko Arnautovic who proved too-hot-to-handle for the 21-year-old as he ran riot down the Potters’ left up against the makeshift full-back.

If Brendan Rodgers is trying to show that Liverpool desperately need a right back by playing Can there his ploy is working.

Flailing out on the right side of the back four both in and out of possession, Can, who failed to win a single tackle or make an interception and posted a lowly 79% passing accuracy, was heavily involved in two and directly at fault for the third of Stoke’s opening three goals as his marker dominated.

Arnautovic burst past the German time and again, cutting inside at the heart of the Reds back line setting up shots on goal for Diouf to finish off, before Can then produced a dreadful header that perfectly knocked down for Walters to latch onto and head home at the second time of asking.

Toure on for Can. A mercy sub if ever there was one. Ibe on for Moreno.

It was a shocking first half performance from the German who was rightly withdrawn at half-time for such an inept showing, but questions must be asked as to why Rodgers insists on picking the natural midfielder at right full-back.

No Striker Selection a Strange and Costly Move

The Reds are far from blessed with natural attacking talent – especially with Daniel Sturridge injured – but Rodgers’ decision to line up without a natural front man was truly bizarre.

Surprising that with no recognised striker in their line-up, #LFC are lacking any real threat up front.

Leaving out Mario Balotelli and Fabio Borini from the squad while Rickie Lambert and Raheem Sterling (understandably) sat on the bench  in preference of two ‘false 9’s’ was inexcusable, and came across as if the Ulsterman was trying to be too clever at a time the Reds needed to revert back to basics.

Attacking play in the first 45 minutes was non-existent as a result, as Philippe Coutinho and Adam Lallana failed to provide a central focal point around which to build attacking moves, and typically, Gerrard grabbed his final Reds goal just seconds after Lambert’s presence up against the City backline caused problems and he won a flick-on for the Captain to race onto and finish expertly.

Emre Can as a dedicated right-back and no forwards. Sterling's demotion aside, I'd struggle to find reasons to defend this #lfc selection.

Having spent such a vast amount of money last summer – though with the help of funds recouped admittedly – it is criminal that Rodgers has failed to sign a striker that he can trust to step in when needed.

Is There Any Way Back for Rodgers?

On a day which saw a number of likely Liverpool farewells, the match could ultimately have seen the final stand of Brendan Rodgers as manager.

If ever a result put the final nail in the coffin, this was certainly it, and it’s now very hard to see how the Northern Irishman avoids being axed after what was the most appalling performance in the club’s history – one that makes it almost impossible for Rodgers to turn around.

An embarrassment. Utter shambles. There looks to be no way back for Rodgers. And he's only got himself to blame. #LFC.

Cutting a dejected figure on the touchline at the breezy Britannia, Rodgers watched on as the same errors proved Liverpool’s Achilles-heal yet again, and with performances and results only getting worse and a season of failing to meet targets, it is difficult to see why Owners, Fenway Sports Group, would hesitate in firing the man they chose to lead the club three years ago.

A monstrous rebuilding job awaits at Anfield, but whether Rodgers will survive the extensive summer reviews and be the man afforded the chance to turn-around the increasing amount of failings, now seems almost impossible.

Embarrassing day for all connected with Lfc 6-1 is not acceptable. Not seen anything but my son left at half time so it must've been bad!!

With the curtain having brutally come down on a disappointing season for the Reds, an extremely interesting and significant summer awaits at Anfield.