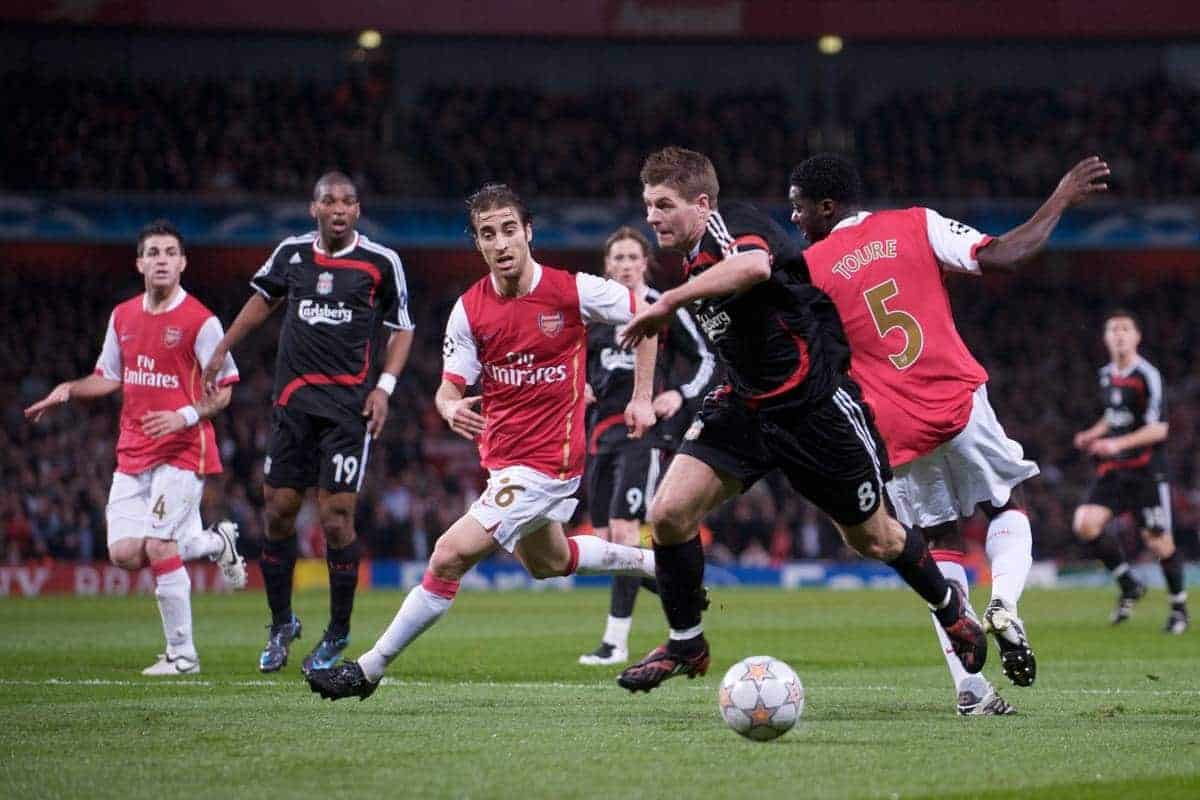 Liverpool’s inspirational captain has claimed 115 assists during his 17-year career at the club. Ahead of his Anfield farewell, Ben Twelves selects ten of Steven Gerrard’s best contributions from open-play. As Gerrard’s Liverpool career comes to a close, many will recall his greatest goals and moments for the club, but it’s easy to overlook just how incredible some of his assists from open play have been.

With the score goalless and only five minutes remaining at Old Trafford, Gerrard stepped up to be the man to swing the game in Liverpool’s favour.

On the ball mid-way inside the United half, the Scouser played a magnificent pass dissecting the Red Devils’ midfield and defence to find Danny Murphy deep inside the area, who produced a beautiful deft lob over Fabian Barthez to silence Old Trafford and hand the Reds a late winner.

Liverpool trailed Arsene Wenger’s side 1-0 at Highbury in this fixture, but only for six minutes thanks in no small part to Gerrard.

After the Reds had won the ball deep in their own half, John Arne Riise burst up the left side where he was spotted instantly by Gerrard, who released the Norwegian on goal with an outstanding first-time, outside of the foot pass, which Riise latched on to and slotted home at Stuart Taylor’s near post to equalise.

While a game that will forever be remembered for Neil Mellor’s last-gasp wonder strike, it was once again the work of the Captain that got the ball rolling at Anfield.

After collecting Harry Kewell’s knock-down 15 yards outside the Gunners’ box, Gerrard controlled, opening the game up for himself superbly.

Now being shut down by Kolo Toure and Cesc Fabregas, the Skipper displayed an almost telepathic awareness, as he threaded a perfectly weighted slide rule pass between the two opposing players with the outside of his right foot to the edge of the area, where Xabi Alonso arrived with immaculate timing to blast home and hand the Reds the lead.

A game remembered as the “Gerrard final” for his two incredible goals, it was also the Captain that dragged the Reds back into the game initially before he twice spectacularly netted.

Coming deep to receive the ball looking to launch attacks with his side 2-0 down, Gerrard flighted a sweeping, pin-point 40-yard ball onto the right boot of Djibril Cisse, who volleyed home in emphatic style to bring Liverpool back into the game. We all know what happened next.

The captain claimed two assists and a goal for himself in this fixture at Anfield, but it was his second creation of the day that will be remembered.

In a deep-lying position in his own half, Gerrard displayed outstanding vision and disguise before dispatching a delightful curling through pass – cutting through the Bolton midfield and defence in one – to find Torres, who didn’t even have to break stride before delicately dinking into the Kop net over the onrushing Jussi Jasskelainen.

In this fixture at Anfield, Gerrard combined with Torres once more for one of the best goals their devastating partnership produced.

The Spaniard cushioned the ball on the half-way line into the Captain’s path before making a forward run, and in trademark Gerrard-style, the Scouser drove at the Magpies defence, bouncing the ball of his head twice, then guided a perfectly weighted reverse through ball on the bounce with his left foot back to Torres, who fooled Steve Harper and rolled home. Magic.

So often the man for the big occasion, the captain didn’t disappoint as he worked his magic once more in this quarter-final Champions League tie.

The Reds trailed the Gunners for all of three minutes, after Gerrard – found by Torres on the edge of the box – skinned both Emmanuel Eboue and Kolo Toure in quick succession with superb close control, before squaring the ball on a plate for Dirk Kuyt to bundle home a vital away goal for Rafael Benitez’s side.

Even in the dark days under Roy Hodgson, Gerrard still managed to provide some moments of class as he did for both goals in this game, but especially the first.

The Reds trailed Bolton by a goal-to-nil at half time, but just four minutes into the second half the Anfield legend escaped the attentions of man-marker-for-the-day, Fabrice Muamba, with some clever movement, before caressing a delightful ball to the back post on the half volley, where El Nino volleyed home into the Kop net to begin the turnaround.

With the Reds 2-0 up and coasting into the second half, the Skipper got in the act again as he provided another trade-mark assist for Luis Suarez.

In his quarter-back role, Gerrard expertly spotted the out-to-in run of Suarez, and picked him out from deep with a devastating faded pass that deceived the whole Black Cats defence to land right at the feet of the Uruguayan, who completed the simple task of slotting home before fully acknowledging the captain’s delightful contribution as he wheeled away.

After falling behind to a horror own-goal from Kolo Toure at Craven Cottage, Gerrard once more provided the inspiration for the Reds to draw level.

The then 33-year-old latched onto a loose ball in the centre circle just inside his own half, where he then clipped an exquisite ball through with the outside of his right foot, carving opening the Fulham back line, to Daniel Sturridge who was released one-on-one and made no mistake.