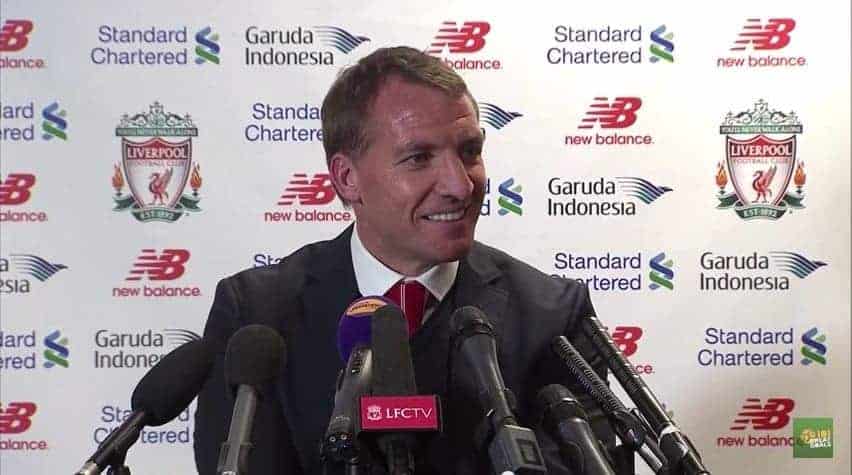 Liverpool manager Brendan Rodgers saw the funny side of things as he reacted to a ‘Rodgers Out’ plane banner flying over Anfield on Saturday.

The banner, possibly commissioned by a group less than content with Liverpool’s performances under Brendan Rodgers of late, was emblazoned with the slogan ‘Rodgers Out, Rafa In’.

Happily for Rodgers, and those with a more level-headed perspective amongst the Anfield faithful, the Reds ran out 2-1 victors over Queens Park Rangers, with goals from Philippe Coutinho and Steven Gerrard securing three precious Premier League points.

Asked about the banner after the game, Rodgers joked: “I thought it was Rafa’s agent in it!”

Rafa Benitez is one of the most successful Liverpool managers in recent memory, having masterminded Champions League success with the Reds in 2005, but Rodgers is determined to look to the future.

“Football has a short memory,” he continued. “We sat here last year having nearly won the league and now we have planes flying over so you can do nothing about it.

“I’m very fortunate and privileged to work here at Liverpool and as I said before there will be many names linked with the job because of the size and scale of the job to be undertaken here.

“I’m hugely honoured every single day of my life, and I will continue to be, however long it lasts.”

Rodgers is right, last season Liverpool supporters were ridiculing a Manchester United ‘Moyes Out’ banner – to stoop to their desperate level would be mindless.

Does Brendan Rodgers deserve to stay on as Liverpool manager? Join the debate in the comments below.