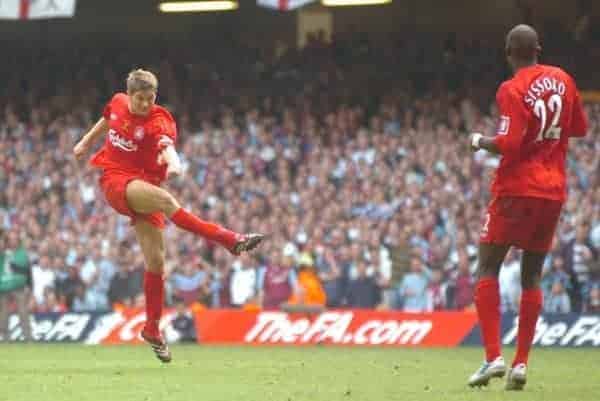 A coundown of the best goals from the competition’s 144 years history, ranked by a vote on the BBC’s website, put Gerrard’s stunning strike past Hammers goalkeeper Shaka Hislop in first place. Gerrard’s strike was voted for by 38% of those participating.

After Gerrard’s goal to level the match at 3-3 with seconds left on the clock, Rafa Benitez’s Reds went on to win the game on penalties in arguably the most exciting FA Cup final of all time.

After the game and lifting the FA Cup, Gerrard said, “Just before my second goal I had taken a free-kick and it nearly went out of the stadium, my legs were so weary, so I don’t quite know where I got the energy from. I must admit I was absolutely delighted to hit the next shot like that. I didn’t mean to put it exactly there but knew I had to get good contact to make sure it would hit the target and I caught it really sweetly.

“It was a great moment when it went in, and I don’t know how I did it. I just concentrated on giving everything to the shot. I didn’t hear the stadium announcer say how much extra was being added, but I knew there wasn’t long left and it was really hard – I was all over the place. In fact, in extra time I just didn’t want the ball. I just kept looking at the clock and wanting it to run out. I had absolutely nothing left.”