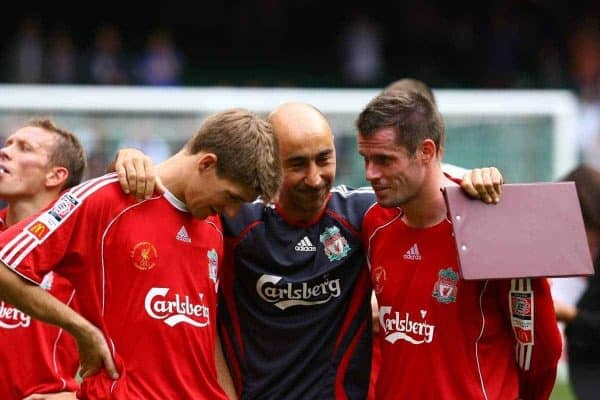 We take a look at the latest transfer rumours affecting Liverpool over the last couple of days.

There are endless daily reports linking Liverpool with player after player, as Brendan Rodgers looks to bolster his squad ahead of the 2015/16 campaign.

With James Milner and Danny Ings already done deals, who else could be set to join them at Anfield next season? Here are the latest rumours that have emerged in the last few days:

According to Croatian publication Vecernji.hr, Liverpool have edged ever closer to signing Croatian wonderkid Mateo Kovacic.

The report claims that personal terms have been agreed with the 21-year-old, and that the only stumbling block now is Liverpool and Inter Milan failing to agree a transfer fee for the player.

A £15.8 million bid has reportedly been tabled by the Merseysiders, but the Nerazzurri are holding out for £21.4 million for their prized asset.

Kovacic is one of Europe’s most exciting young talents, and his superb blend of creativity, skill and goalscoring threat from midfield would make him a great signing. It would also be a big statement to their top-four rivals.

You can always rely on Metro to produce some pretty skeptical transfer reports, with their latest offering claiming Liverpool will sign Juventus superstar Carlos Tevez this summer.

The report says that ‘Italian sources’ believe the Reds could swoop because they know Tevez has now played his last game for the Old Lady. Which Italian sources, exactly?

The 31-year-old, who played for bitter rivals Man United between 2007 and 2009, has been Juve’s star man this season, scoring 29 goals as they won Serie A and Coppa Italia, and reached the Champions League final.

Although age is starting to catch up with the controversial striker, he would still prove to be a terrific signing should anything ever materialise. Just don’t believe one iota of this report though, whatever you do.

Reds closing in on new goalkeeper

Mark Ogden of the Daily Telegraph claims that the Reds are closing in on acquiring the services of Bolton Wanderers goalkeeper Adam Bogdan.

The 27-year-old’s contract with the Championship club is set to expire this summer, and Liverpool are keen on snapping him up on a free transfer. He recently told Nemzeti Sport about his desire to move on to pastures new.

“I am confident that I will soon decide my fate,” he said.

“My goal is to play at a higher level, but it also depends on where you get a chance. We’ll see if everything is decided in the next week or two.”

The Hungarian stopper, who has won 19 caps for his country to date, was superb for the Trotters at Anfield back in January, as Rodgers’ men were held to a 0-0 draw.

With Brad Jones leaving this summer, an upgrade is needed as back-up to Simon Mignolet. Although Bogdan is clearly a better ‘keeper than Jones, there are still question marks about his pedigree.

Would Liverpool be able to rely on him week in, week out, should Mignolet suddenly pick up a long-term injury? It’s certainly debatable.

Kieran Trippier instead of Nathaniel Clyne?

Having had a £10 million bid for Southampton right-back Nathaniel Clyne, the Mirror reports, via the Times, that Rodgers is now turning his attention to Burnley star Kieran Trippier.

The 24-year-old full-back had a very impressive season in an ultimately-doomed campaign for the Clarets, and was arguably his side’s standout player along with new Liverpool recruit Ings.

Trippier would feel more like a risk than Clyne though, given the fact the latter is now England’s first-choice right-back, and they should really be aiming to strike a deal with the Southampton man.

Is Trippier really much better than Manquillo?

According to (Arsenal fan) John Cross the Mirror, Liverpool’s wantaway starlet Raheem Sterling has been the subject of a £30 million bid from Manchester City.

The 20-year-old’s future has been one of the biggest talking points of English football over the last couple of months, with City, United, Arsenal, Chelsea and others all linked with signing the speedy forward.

Although there is every chance that FSG will dig their heels in and not allow Sterling to leave this summer, much like they did with Suarez in 2013, the Etihad does appear to be his most likely destination should he move on.

However vast Sterling’s potential is- there are plenty of differing opinions on the matter- you have to wonder at what point Liverpool will accept an offer, should a monumental bid be tabled.

With news emerging that assistant manager Colin Pascoe and first-team coach Mike Marsh have been sacked by Liverpool, talk has immediately turned to their potential replacements.

A rather flimsy report from Sky Sports suggest former Reds stars Sami Hyypia and Bolo Zenden are in the running to replace Marsh.

Hyypia has managed Bayer Leverkusen and Brighton in recent times, to a varied degree of success, while Zenden was Rafa Benitez’s assistant during his brief time in charge at Chelsea.

It is news that has been met with real delight by a large majority of Reds fanatics, with the Spaniard extremely popular during his three years as Benitez’s assistant between 2004 and 2007.

The 52-year-old has just led Israeli giants Maccabi Tel Aviv to a domestic treble, in just his second ever job as a manager.

Moxley also reports that Liverpool Under-21 boss Alex Inglethorpe will be promoted to the first-team staff, as a reward for his performance since taking over in 2012.