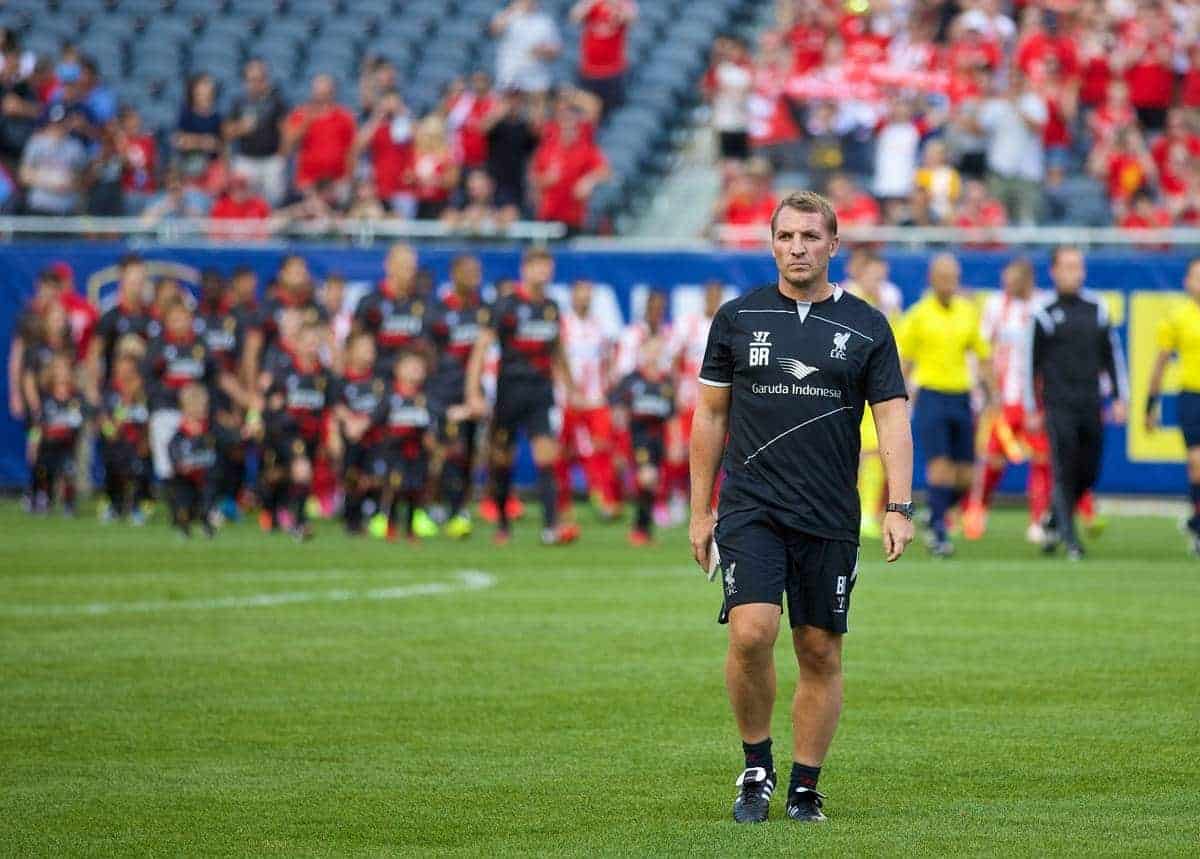 As Brendan Rodgers’ Liverpool squad head to the Far East and Australia for their pre-season tour, Jack Lusby selects five key moves he should make. With Liverpool beginning their pre-season tour of the Far East and Australia, manager Brendan Rodgers has some key decisions to make as he plans for a strong 2015/16 campaign.

The Reds take in clashes with the Thailand All-Stars, Brisbane Roar, Adelaide United and a Malaysia XI during a 10-day period.

With his squad announced, and some surprise names included and omitted, Rodgers has a clear vision of the progress to be made this summer.

So what moves should he make on this pre-season tour?

Here are five key areas he must focus on. Of Rodgers’ 30-man squad, there are seven players who could potentially be vying for a first-team centre-back berth both on tour and for the season ahead.

Martin Skrtel, Mamadou Sakho, Dejan Lovren and Kolo Toure were all members of last season’s defensive ranks, while Joe Gomez, Andre Wisdom and Daniel Cleary are in line as the Reds continue to build.

Liverpool play just four games on tour, and Rodgers must establish his first-choice centre-back options to maintain consistency prior to 2015/16.

Signing a new contract on Saturday, Skrtel looks set for a continued role in Rodgers’ first team, while Sakho’s strong showings since his arrival in 2013 should make him a key player.

But could Lovren prove himself this summer? Or could high-potential Gomez force his way in the manager’s thinking? After suffering a serious ankle injury back in February, which ruled him out for the rest of the Liverpool Under-21s’ season, Jordan Rossiter returns to Rodgers’ squad for the pre-season tour.

Rossiter’s injury came at an unfortunate time, with the 18-year-old looking likely to make an impact on the first team in 2014/15.

Now he’s returned, however, Rodgers must continue to aid his development.

Reflecting on the midfielder’s injury, Liverpool academy director Alex Inglethorpe said in February that “he will come back stronger than ever.”

“Knowing his character as we all do at the academy it’s something he will overcome in his typical and determined, single-minded way,” Inglethorpe said.

Determined and single-minded are two astute descriptions of Rossiter both off the field and during play, and his on-field attributes should be maximised this pre-season in a defensive-midfield role.

With Lucas Leiva serving as Liverpool’s only senior option in this role, the tenacious Rossiter should be moulded into his deputy while away in the Far East and Australia. Two of Rodgers’ key attacking-midfield players miss out on the tour in Roberto Firmino and Philippe Coutinho, but the manager is still inundated with forward options.

Meanwhile Raheem Sterling could also be in contention despite his transgressions, and James Milner can operate as a winger, too.

This gives Rodgers nine options in support of his strikers, and he must consider these as he restructures an attacking-midfield line that was too often disjointed in 2014/15.

This indecision saw Liverpool struggle for fluidity and consistency in attack last term, and he must define his attacking midfield during pre-season to avoid this. As a by-product of this decision, Rodgers must look to get the best out of Markovic this pre-season.

The 21-year-old struggled in his first season on Merseyside, but has the raw ability—pace, dribbling and movement—that could see him ensure Sterling’s likely departure to Manchester City is not an issue for the Reds.

However, to do so, Rodgers must use him in a left-forward role.

This is where he is most effective, as he proved during his time at Benfica. In 2014/15 he was too often utilised in a reductive wing-back role, and was only deployed on the left attacking flank once—a 30-minute cameo against City at the very beginning of the season.

Markovic’s inclusion somewhat quashes speculation that he could depart this summer. Now, Rodgers should look to utilise him to his devastating best.

A Markovic-Lallana-Ibe supporting trio could be hugely effective, backed up Kent, Ojo and Wilson if required, and would serve as a useful primer for when Firmino and Coutinho return.

Focus on Development of Divock Origi and Danny Ings While he has a host of exciting talents to choose from both in defence and midfield, Rodgers has only three options when it comes to his centre-forwards on tour.

The former pair have just arrived and will be looking to integrate quickly within Rodgers’ system, while Lambert is likely to depart this summer and could be included purely to make up the numbers as Daniel Sturridge recovers from injury and the Reds search for a fourth striker.

Either way, Lambert is not a long-term option.

Therefore, Rodgers should focus on the development of Origi and Ings this summer—just 20 and 22 years old respectively.

Both suit Rodgers’ lone-forward specification in terms of movement, pressing and versatility, but could also complement each other if they are deployed in a front two.

This could be a fruitful bedding-in process for the pair.

How should Brendan Rodgers approach Liverpool’s pre-season tour of the Far East and Australia? Let us know in the comments below.