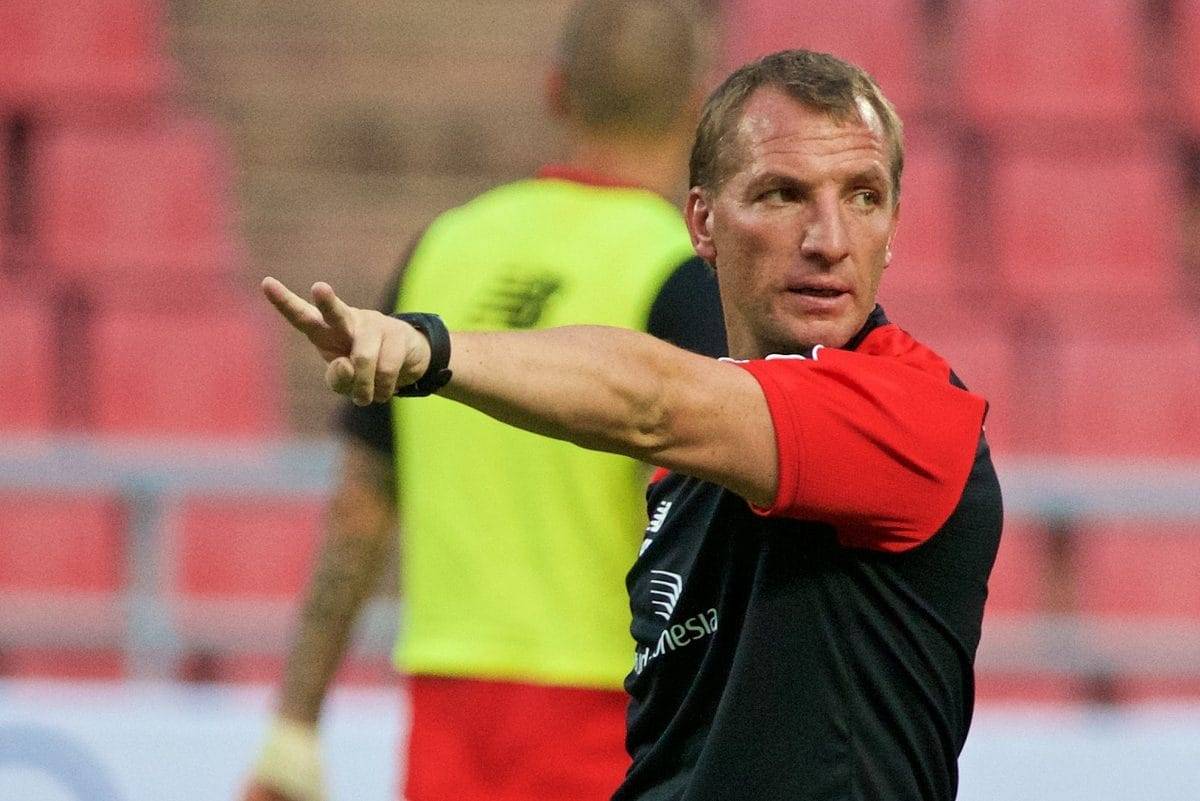 Aaron Cutler urges patience as Brendan Rodgers seeks to win over his critics.

Reading too much into pre-season is a naive and dangerous trait. Tours of yesteryear have taught us never to assume friendly performances – good or bad – will translate to competitive action.

Indeed if pre-season were a true barometer, Andriy Voronin would have eclipsed Ian Rush as the Reds’ leading goalscorer years ago.

Likewise Iago Aspas would be etched into Anfield folklore for reasons other than an infamous corner kick. Neither materialised, belying some outlandish predictions.

The close season has become a cash cow fuelled by the globalisation of the sport. A handful of matches compliment photo ops aplenty and the unashamed hardening of commercial deals. Fitness is garnered but little else besides.

Furthermore, ‘exhibition’ games are dogged by questionable opposition and a general mishmash of team selections. Word has it Claire Rourke was handed a debut against Felda United.

To lament this schedule is not to criticise Liverpool themselves. We are simply playing the game – literally on some ocassions – along with every other club with designs on penetrating that global market. The point is we and our rivals learn little from the experience.

Instead the most telling aspect of the previous two months has come off field and courtesy of Fenway Sport Group’s unequivocal backing of Brendan Rodgers. Post-Stoke. knives were sharpened, a managerial blood-letting anticipated, or demanded, depending on your point of view.

Instead we received radio silence before actions – as opposed to words – that cemented the manager’s position. What has become clear is if Brendan is for the chop he will go down on his terms.

Coaching appointments and player recruitment geared towards the boss and his methods suggest FSG are supportive, ‘all in’ to borrow adidas phraseology. However boardroom support is one thing, the backing of supporters quite another.

For Rodgers’ relationship with the Anfield faithful has been a curious one from the outset.

On succeeding Kenny Dalglish the Northern Irishman categorised support into three groups, conceding – “The third group are the critics and you never change them ever. Ever. If you win 4-0 it should have been five, if you win one league title you should have won three. I will never worry about that group because you can never change them.”

But few expected that percentage to be quite so emboldened.

Even during the midst of 2014’s exhilarating title charge the nay-sayers were rife, reverting to teeth when tactics proved impregnable.

Make no mistake the Rodgers Out brigade is far more than a pocket of Main Stander’s with an axe to grind. This split is far greater, contributing to a toxic atmosphere that threatens to boil over.

We have already seen planes flown in protest, idiocy symptomatic of the Facebook age. The fear is such tacky if harmless gestures escalate into vocal dissatisfaction, further damaging an already lacklustre support.

Should that manifest the team will suffer every bit as much as Rodgers. That said there seems an almost sad inevitability to it, fears heightened by a brutal and foreboding fixture list.

Never underestimate the power of The Kop. A vociferous Anfield has pulled Liverpool across the line on countless occasions. When on song our crowd are game-changers, screaming banshees that reduce even the most senior of statesman to quivering wrecks.

When that backing is flipped it can prove paralysing. Raheem Sterling (rightly or wrongly) felt the wrath of The Centenary Stand for three months solid, seemingly forgetting how to finish as a result. Should twitter feeds be born out in match day crowds the same fate awaits Brendan.

Perhaps this unravelling is already in motion.

For betwixt steadfast support and outright protest is a lifeless middle ground that has become the routine match going experience. This can be attributed to numerous occurrences – ticket prices, day-trippers, an aging crowd, all seat-a stadium and unchecked expectancy amongst them – but perhaps a general antipathy towards Rodgers underpins it all.

If so his could prove a slippery slope. What happens if Liverpool start sluggishly? What occurs if new signings fail to hit the ground running? Twitter and radio phone-ins alike will explode; calls for Jurgen Klopp will reach a scouse crescendo.

Most worryingly a negative atmosphere will seep into the squad and damage morale. Those first teamers unsure on Rodgers – and there will be some – may think twice about emptying all should they detect dissenting voices.

A domino effect could derail the entire campaign. And to what end? FSG may relent to fan pressure and instil Klopp but a season will be squandered – another year absent from the Champions League.

There is a reason why, despite financial backing, Rodgers remains favourite to lose his job next season. Because everyone, including the man himself, acknowledges the precipice upon which he treads. 2015/16 is make or break, we all know it. [td_ad_box spot_id=“custom_ad_3″]

It is why a promising, if not perfect, start is absolutely essential. Rodgers will never convince those who despise him so and choose to stoop to personal insults; what he must focus on is placating those who are on message if not onside.

How does he do so? By winning football matches, simply, but that is a skill subject to numerous variables. What he can better control is his own behaviour.

Talk less, tinker only occasionally, refrain from throwing individuals under the buss and for goodness sake drop Dejan Lovren.

Those anti-Rodgers stalwarts will point to numerous failings – his inexperience, poor signings, the displacing of Dalglish… but the biggest factor is perhaps Brand Brendan.

He waltzed into Liverpool and spoke of reinventing the wheel, misjudging a support schooled in socialist ideals; the like who frown upon extravagance and call a spade a spade.

They demand substance over sound bites. To that end a summer without comment never mind hyperbole was a refreshing change, as too was business conducted quickly and without fanfare.

Perhaps lessons have been learned by club and manager. Maybe everyone accepts this project stands at a delicate crossroads and a fan revolt expunges it.

If those running Liverpool truly reviewed their performance and scrawled ‘Must Do Better’ it only fair we, as supporters, do likewise.

Last season’s atmosphere was deplorable – flitting from tranquil to tempestuous, hindering a beleaguered squad further still. Let’s buck the trend and support both the reds and their manager.

Let’s hark back to what distinguished us from the plastic and prawn sandwich brigades.

Let’s at the very least show some patience before launching operation fume. It could just prove the difference between a promising start and another five year plan.

Brendan is far from perfect but if FSG have afforded him time it only right we do the same. For a while at least.