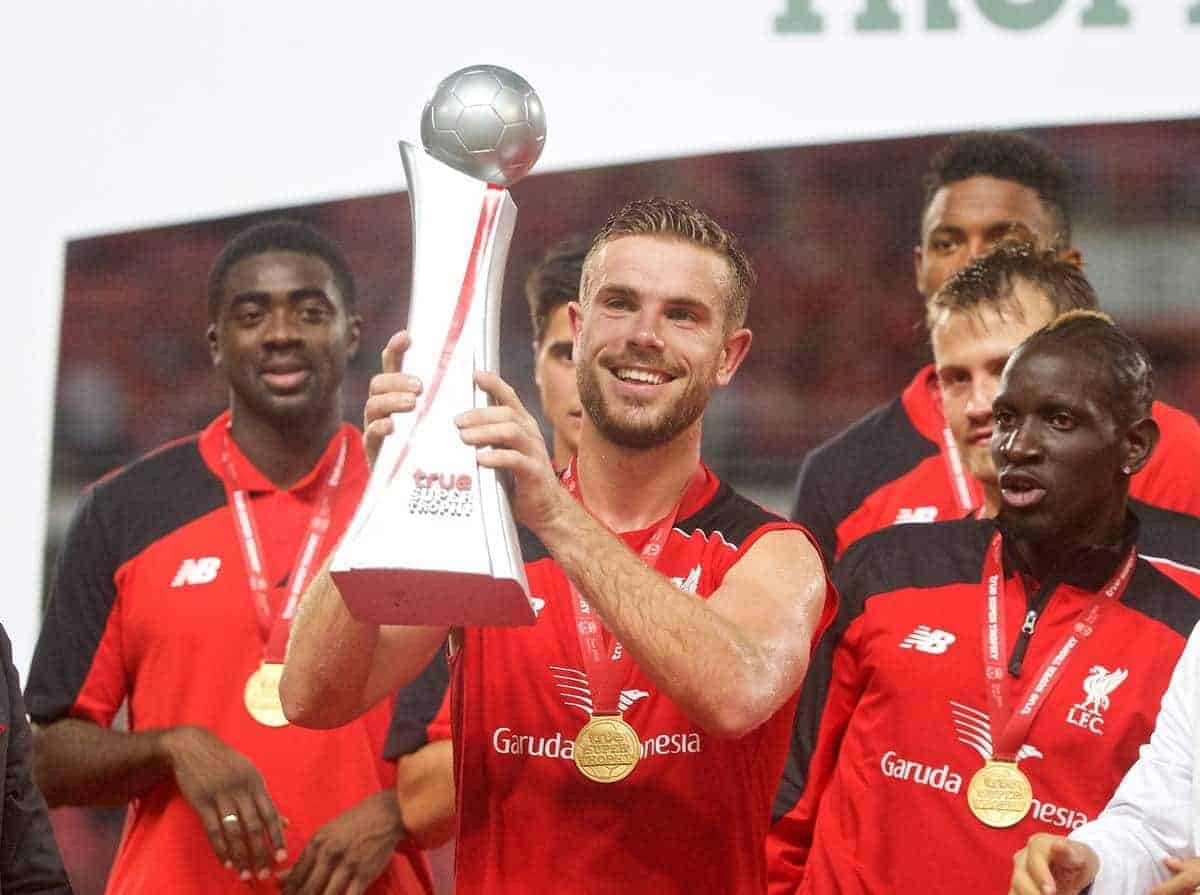 Liverpool kicked off their pre-season schedule with a comfortable 4-0 win against Thai All Stars in rainy Bangkok.

Goals from Lazar Markovic and Mamadou Sakho in a positive first half workout were added to in the monsoon conditions of the second period by Adam Lallana and Divock Origi.

Despite the second half conditions, it was a worthwhile exercise as Brendan Rodgers’ men were put through their paces by an energetic All Stars’ side in the 35 degree humidity.

There were plenty of positives from the clash, but what did we “learn”?

Liverpool’s transfer policy of getting business done early has certainly helped the new boys settle as they all impressed.

Adam Bogdan, Joe Gomez and Danny Ings were all comfortable first half, with the outfield duo impressing in their respective roles. Gomez was composed and ambitious at right back, while Ings was clever and lively in the attack and was harshly denied his first Reds goal.

Second half, Nathanial Clyne, James Milner and goal-scorer Origi all looked equally as composed in their positions.

Ibe Clyne Origi is a nice and fast triangle down the right channel. hopefully see it on a pitch which isnt sodden/rubbish anyway

The new full-back dominated the right hand side with Jordon Ibe, while Milner was tidy if unspectacular in midfield. In attack, Origi impressed with his directness, pace and power, but work on his finishing is certainly needed.

All of the new arrivals looked comfortable with teammates and the systems put in place, and hopefully Roberto Firmino can slot in just as effortlessly.

It is only the early stages of pre-season, but it can be argued that Rodgers hinted at what his first choice defensive line could be this season.

The Reds second half defence included Clyne, Martin Skrtel, and Dejan Lovren and though impressive youngster Joe Maguire completed the set-up at left back, swap in Alberto Moreno and you could well have the starting back line against Stoke for the opening game.

There’s still plenty of time for others such as the impressive Joe Gomez, Andre Wisdom and Mamadou Sakho in particular, to force their way into contention though, with Tiago Ilori also to be given a chance to impress.

Sakho will hope his goal and dominant display goes someway to doing that as will new arrival Gomez after a confident and classy first outing in a Liverpool shirt.

One of the biggest positives from the clash was the performance of Teixeira, who caught the eye with a pleasing first half performance.

It was made even more impressive by the fact the play-maker has not long recovered from a nasty broken leg sustained in April while on loan at Brighton.

But the Portuguese midfielder showed no signs of any lasting or psychological effects, as he produced a controlling performance in the midfield diamond of the first 45.

His good work saw him grab assists for both Markovic’s opening goal of the game and Sakho’s header with a pin-point corner.

Tidy and creative in possession while industrious in his defensive work, the 22-year-old faces a big season at Anfield with his future far from certain.

On this evidence he looks ready to stake his claim for a place in Rodgers’ squad.

It was plain for all watching to see the effect of being handed the armband has already had on Henderson.

The 24-year-old was full of belief as he lead the second half XI which looked closer to a ‘first choice’ team than the first half XI.

And it was made even more obvious as Henderson claimed an outstanding assist for Lallana’s goal four minutes into the second half. He picked out his England teammate with an inch perfect ‘Rabona’ reverse pass which was well finished by the 27-year-old.

Henderson was his typical energetic self, but the quality of his game was also evident.

His distribution was good with some tidy one and two touch play alongside raking long passes too, and he almost notched twice seeing one effort saved and an audacious chip land just the wrong side of the crossbar.

Of course there is no getting carried away at this early stage but it was great to see the captain so visibly inspired. [td_ad_box spot_id=“custom_ad_3″]

It was undoubtedly a promising first appearance for Divock Origi in Liverpool red, but the Belgian showed he’s not quite ready to lead the Reds line, yet.

With Daniel Sturridge set to miss the start of the season, Rodgers has a decision to make over who will stand in for the 26-year-old.

Origi certainly made movements to staking his claim with a sharp performance – as did Ings – and showed great pace, directness and power as well as some nice touches.

But despite his well-taken header which will now increase attention, he also showed his talent is still raw and not befitting of a starting striker just yet.

He found the net but should have had a hat-trick signalling his finishing needs work, and with expectations already high of the £10million man, sensible management at this early stage is needed to ensure he does become the man to spearhead the attack in the not too distant future.

After a lively first outing, Ings offered confidence that perhaps he can be while allowing Origi to develop with less pressure on his shoulders.