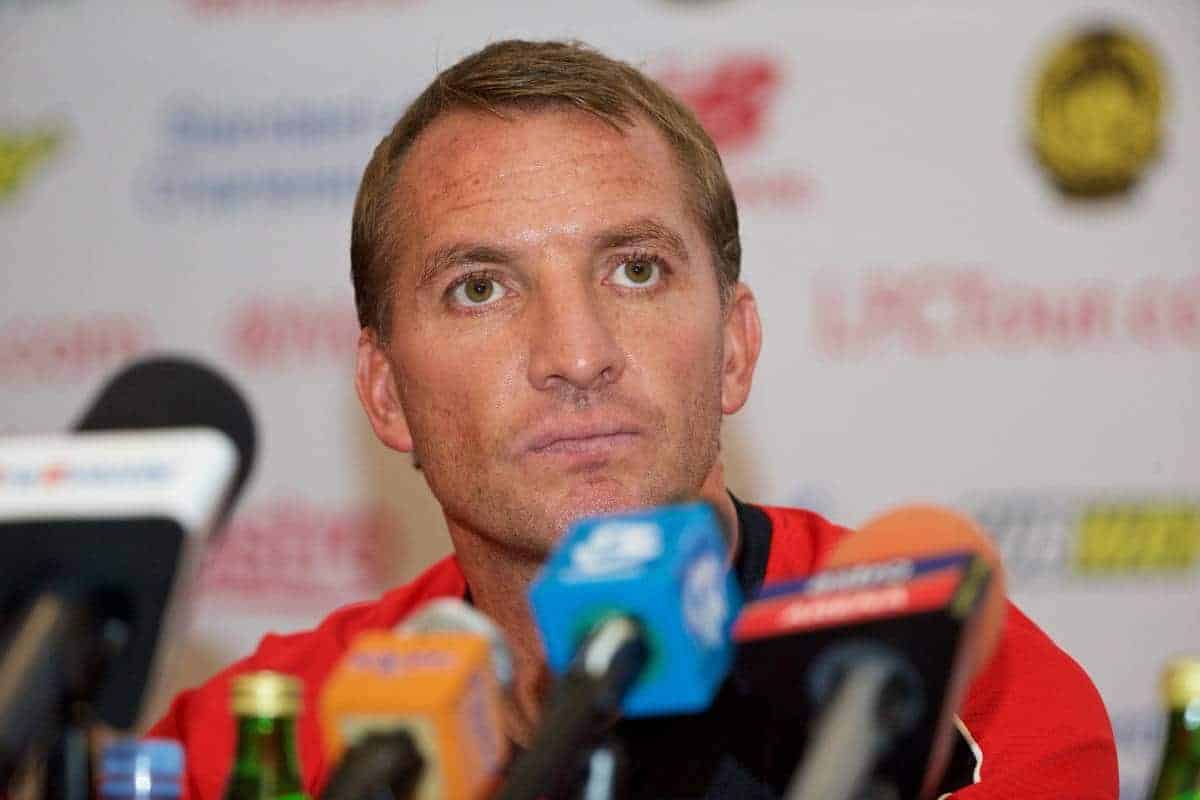 Liverpool boss Brendan Rodgers feels he needs to regain the trust of the club’s fans this season after a poor 2014-15 that concluded with what he has described as his “worst day in football”.

A year on from finishing second in the Barclays Premier League, the Reds’ follow-up campaign ended in May with them out of the Champions League places in a disappointing sixth position and suffering the humiliation of a 6-1 final-day defeat at Stoke.

Liverpool are back at the Britannia Stadium taking on the Potters again on Sunday to open their 2015-16 season. And Rodgers – who has been in his job since 2012 – said at his pre-match press conference: “I need to gain the supporters’ trust again.

“It has been an absolute privilege to manage this club and have the supporters behind us.

Rodgers agreed with the suggestion he and his players “owe the fans a result” after the 6-1 thrashing and admits, with at least a fourth-placed finish the aim this season, they are under pressure to deliver – although he stressed that has always been the case since his appointment three years ago.

And when asked if he had feared he might be sacked after the Stoke defeat, the Northern Irishman said: “You never take your position here for granted and you certainly can never be complacent.

“But the owners have always put a big trust in me from the first day I came in here and I have confidence in how I work.”

Regarding end-of-season talks held with the club’s owners, he added: “There were things we needed to look at and discuss on how we can become better.

“They have always felt I was the guy to be here and reassured me of that, so that gives me great confidence going ahead.”

Rodgers has stressed lessons have been learned from the “unacceptable” previous outing at Stoke, and described Sunday’s rematch as the “perfect” opening fixture for the Liverpool’s season.

“I aim to never ever have anything like that again in my career,” Rodgers said of the defeat in May. “That was my worst day in football, by a long way.

“But there were great lessons learned from that. The supporters were rightly absolutely devastated and we are determined to put things right.

“When the fixture came out (Sunday’s game), I felt we couldn’t have had a better one to be honest.

“I think lots of people looked at it wondering whether we would have been better going back later, but for me it was the perfect fixture.

“The reaction (to the loss in May) over the course of the summer has been terrific and it gives us real motivation now to start the season well.”

Liverpool have lost the likes of Steven Gerrard and Raheem Sterling this summer, but seven new signings have been brought in and among them, there is certainly a weight of expectation on the shoulders of striker Christian Benteke, bought from Aston Villa for £32.5million.

Benteke has rejected suggestions from Villa boss Tim Sherwood that he is not suited to his new club’s style because he primarily feeds off crosses. And Rodgers has backed Benteke up, saying: “I think he is the type of player who fits perfectly for us. [td_ad_box spot_id=“custom_ad_3”]

“I have seen him close hand, and for me, he can play in any type of game.

“He can play the power game, the strength game, but what I think will surprise a lot of people is the quality of his football – his clever movement, his link-up play and the different types of goals he scores with his feet. He is going to be a huge player for us.”