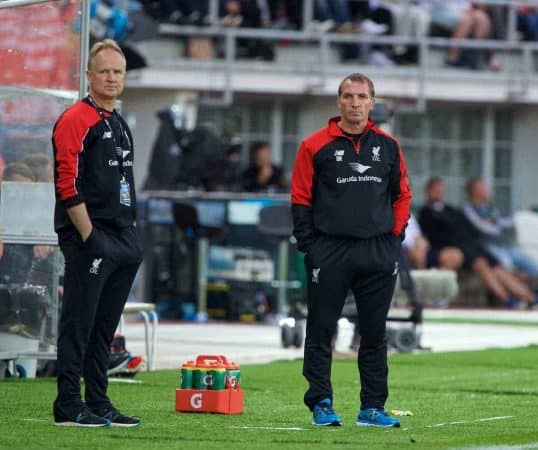 Liverpool and Brendan Rodgers: Time to get it right

A new captain, new assistant, new first-team coach, new No. 2, new No. 7, new No. 9 and five more new faces – it’s been another summer of change at Liverpool. Liverpudlian assess the Reds’ chances in 2015/16.

With the 6 -1 defeat painfully fresh in all our minds, we toddle off to the Britannia Stadium again to renew hostilities with an optimism that surely things must improve this time round – both there and in general. Again, this year is another of those pivotal, critical seasons where our fortunes can go either way – and haven’t we had plenty of them in the recent past?.

The preamble started in the summer with FSG maintaining their faith in Brendan Rodgers to resume as manager when Carlo Ancelotti and possibly Jurgen Klopp were potentially available as replacements.

The subsequent decision to remove Colin Pascoe and Mike Marsh at a time when our captain had just left the club can be viewed as either bold or suicidal – depending on your perspective. We have been told it was apparently Rodgers’ decision to make these changes and that raises even more eyebrows, if true, because surely he will not survive another season of mediocrity given that, along with another whole new batch of players, any new coaching staff also has to be integrated into his ideas too -and all of this while chasing the good start considered vital nowadays.

Ok it was obvious that we couldn’t go into another season thinking everything was going to be tickety boo with the odd player coming in here and there, but it still struck me as odd that he should discard his long term, trusty lieutenants at probably the most important time
in his managerial career.

Traditional footballing wisdom dictates that by the time all the new players have got used to their new team mates, you will be trailing in the wake of the sides who have just added the odd bit of quality and will more than likely hit the ground running. Can we buck this trend and pick it up straight away especially when our (potentially) best eleven haven’t even played a competitive match together yet?

Only time will tell, however this not entirely new of course to those of us that have been here a long time. In the eighties, for example, a certain Ian Rush left to join Juventus and the Evertonians were wetting their pants in anticipation of the impending gloom and doom descending
on Anfield.

Oh how they ridiculed the money being spent on some relatively unknown Watford winger, a mercurial little Geordie and a Scouser plying his trade at Oxford. The Barnes, Beardsley and Aldridge combination, though, produced some of the most exhilarating attacking ever seen in the game and all went on to become household names.

OK, its different times and a whole new ball game, but if we can get anything like the same variety of attacking options out of our samba pair of Coutinho and Firmino playing all round Benteke, then we might just surprise a few people this year.

Practically every football pundit has us fifth at best in their predictions but these self same “experts” never had us finishing second the year before last either, so it is crucial that we do not let last seasons top four become established, smug, greedy and rich enough to attract and retain the best players while we become eternally the best of the rest.

Occupying the Champions League places, enjoying the payback of qualification and the ultimately doing well in the showpiece competition is the be all and end all. The UEFA Cup competition or whatever it is called is an unnecessary distraction and the Thursday night matches, travelling back from weird and wonderful places and then playing a catch up game on the Sunday is a mess all round.

Let’s give the squad players a chance in that meaningless competition and concentrate everything on the league. We have seen what can happen if you have no distractions when we were within a win of the Premier League.

Last year, with practically no goal scoring options, we were still in with a chance of the top four till quite late into the season, despite our bad start. It was only our implosion late on that gave Manchester United a flattering 8 point gap because they were nothing special last year either.

Chelsea were always going to be champions once they got a decent centre forward so lets see if Benteke can add the power, strength and combative qualities that Diego Costa brought them. They have enough there again and have added Falcao to the mix and look sure to be the team to beat again.

City don’t fill me with too much dread though, particularly if Aguero continues to have his injury issues, as Dzeko and Jovetic look to be on their way. Total reliance on young Sterling is a real gamble though for them and only time will tell if that fee is justified or not.

Suffice to say though, I haven’t spoken to one single person who isn’t delighted with our part of the deal. Like United, they don’t seem to have addressed their problems (up to now anyway) and unless they strengthen their weaknesses at the front and the back (again like United)I do not see them being as good as the pundits would have you believe.

Arsenal, conversely, seem to be getting it right at long last and the Peter Cech signing looks really good business. Sanchez took them up a level last year and don’t we all regret him not signing for us? What a difference he would have made last year?

The goalscoring options in Benteke, Origi, Ings and hopefully Sturridge in looks a whole lot better now. The consensus of opinion is we have bought wisely, though they all have a lot to prove and like last years acquisitions, have to hit the ground running.

A couple of “steady eddies” in Henderson and Milner in the middle of the park to supplement the flair going forward and who knows. Proving hard to beat is the first requirement as we had some disgraceful results last year and some of them were simply unacceptable. We have a sizeable squad now with quality replacements in every position so lets see if the appetite I questioned at the end of last season is there or not. [td_ad_box spot_id=“custom_ad_3″]

Ian Ayre used the analogy, in describing the process of transfer acquisitions, as seeing how the “cards will fall” i.e sometimes it works out, sometimes it doesn’t, so with practically a new pack of cards at his disposal, shuffled well, let’s see what sort of hand we get dealt this time.

The stakes continue to get higher and the steely eyes across the Premier League card school are giving nothing away and gazing down on us with, apparently, the chips stacked in their favour.
With no one giving us a chance and expectations accordingly low, that is a nice place to start and I would like to think it might be a bit more open than some are predicting.

Enthralling times, indeed, to be a Red.