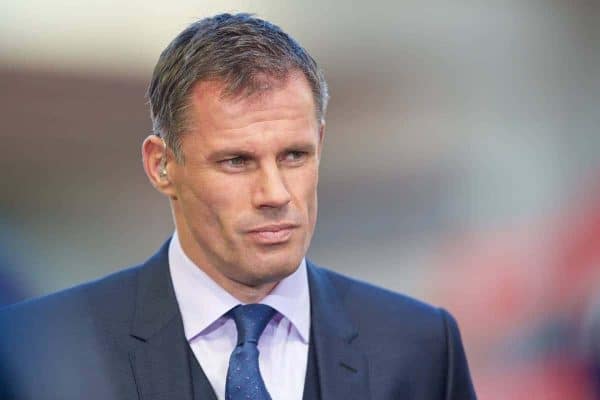 The 37-year-old, who is second only to Ian Callaghan in terms of the Reds’ highest appearance makers, still feels his former club lack a top class midfielder to sit in front of the defence.

“I would have liked to have seen them sign a defensive midfield player, with Steven Gerrard having moved on,” he told Sky Sports.

“Emre Can can maybe step in there and you still have Lucas Leiva, but it looks like a position that Liverpool need to fill, and it is one that I am slightly surprised they haven’t given their defensive record over the last few years.”

Despite these fears, Carragher believes Liverpool have spent well on the whole, with positive reinforcements made in numerous areas of the pitch.

“Every signing you can understand, whereas last summer there were certain signings that you could not quite understand why they were made,” he explained.

“I think that this summer getting James Milner in, with Premier League experience, he has been there and done it with Manchester City and so is a good signing.

“The full-backs who have come in, the young left-back from Charlton Joe Gomez and Nathaniel Clyne, are two young English players, which is good.

“Danny Ings coming in will be an improvement on the backup strikers Liverpool had last season, especially in terms of Mario Balotelli and Fabio Borini – he will offer more than either of them.

“I think Christian Benteke was someone who Liverpool needed, a physical presence at the top end of the pitch, with pace and power, Premier League experience and a great goals record.”

Finally, Carragher highlighted the importance of Sunday’s Premier League opener against Stoke City, both in terms of Brendan Rodgers and the team.

“There will be a lot of eyes on Liverpool this season, because there have been a lot of new players coming in, there have been changes to the coaching staff and people know Liverpool have a tough start,” he said. [td_ad_box spot_id=“custom_ad_3″]

“We know that Liverpool did not have a great season last season and all eyes will be on Brendan Rodgers and Liverpool, so it is vital that they get off to a good start because the fixtures they have got are very difficult.

“Now if they could navigate them and have a good start, then they will have got a lot of tough fixtures, especially away from home, out of the way, which would bode well for the rest of the season.

“But it is certainly a difficult start for them on paper and it is vital that they start well at Stoke and certainly do not come away with a defeat on the opening day.”