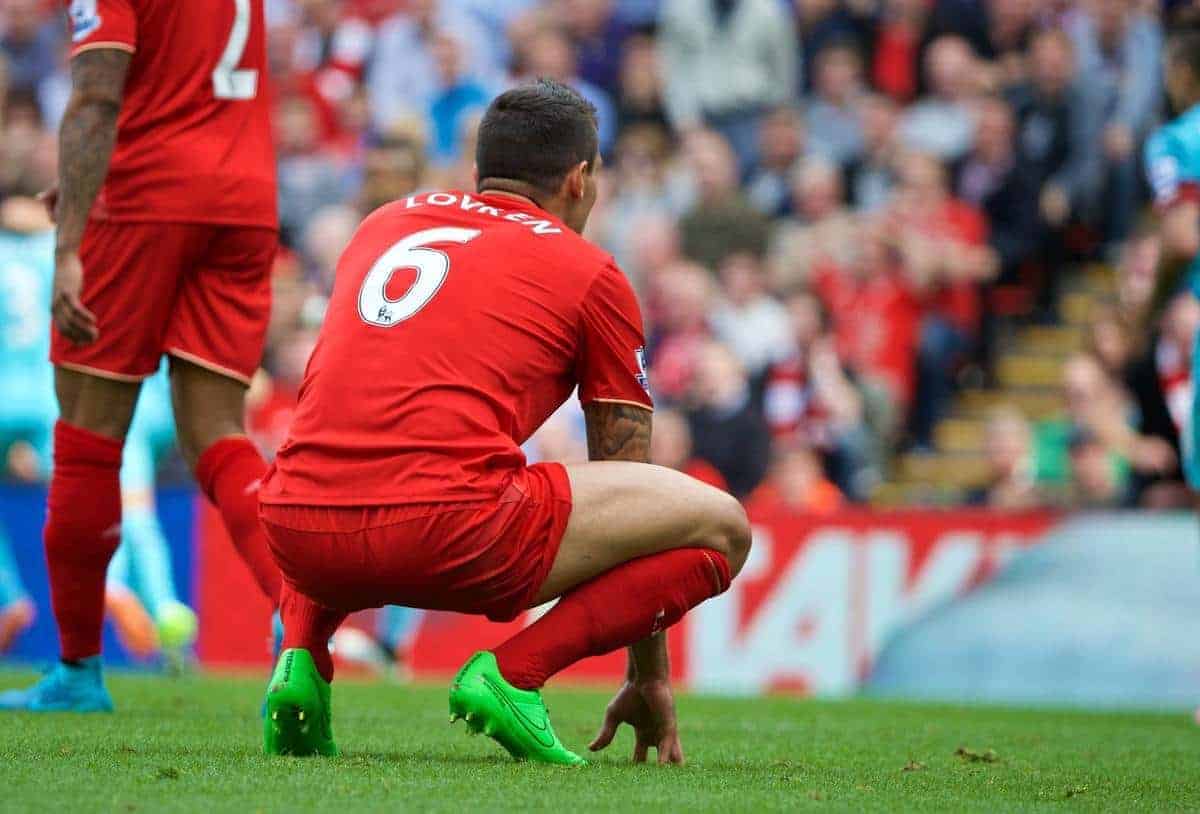 A truly miserable afternoon at Anfield saw the Reds slump to their first defeat of the season against Slaven Bilic’s Hammers.

Despite the Reds being in control, Mark Noble doubled the lead as he slotted home from the edge of the box as things went from bad to worse.

Philippe Coutinho’s red card ended any feint hopes of an unlikely comeback after 52 minutes and Noble later joined the Brazilian in taking an early shower after being harshly dismissed for a lunge on Danny Ings.

Diafra Sakho’s added time strike compounded the Reds’ misery on a truly awful afternoon in L4, and here are the talking points from the deserved defeat.

While not one player covered themselves in glory in the heavy loss, the Croatian’s performance was particularly bad on the day.

After three games of much improved displays, it appeared that Lovren had turned a corner in his second season at Anfield, but the £20million defender’s performance level came crashing back down to earth with a bump after a woeful showing.

From the off the Croatia international looked on-edge, and his sloppiness in possession and indecision – which ultimately proved costly for the second goal – alongside Martin Skrtel who was also poor, made for a return to the disastrous defensive set-up that looked to have been left behind.

Form is temporary, Lovren is permanent.

Lovren never looked settled despite the little threat actually posed by the Hammers, and he again looked lost when dragged out of position – epitomised by his horror error which saw him robbed of possession after failing to control and clear, resulting directly in Noble’s goal. His contribution for the third with a rash decision to charge out of the back-line was also mightily unimpressive.

It was a huge backward step for the centre back after making progress and Rodgers must choose very carefully over who partners Skrtel at Old Trafford, with Sakho waiting in the wings.

Deja vu as Reds fail to break down deep defence

It proved costly numerous times last season, and it did again today – as the Reds failed to break down another deep and stubborn visiting defence.

Last season Liverpool dropped points against unambitious visitors such as Hull and Sunderland at Anfield through their inability to breach deep defensive lines, and despite the new faces and creativity in the team, Rodgers’ side were found wanting again.

Generally, conceding cheap early goals to a team that parks the bus when your chance creativity isn't good isn't the best plan.

After West Ham notched the goal they hoped would come their way, the Reds looked bereft of ideas as they failed to penetrate in central areas and resorted to the same tactic of feeding the marauding Nathaniel Clyne, who burst up the right numerous times but failed to provide anything productive.

Coutinho and Roberto Firmino enjoyed little influence on proceedings, not helped by the Reds lack of width which Rodgers addressed second half but ultimately too late, and as a result, there was no route through, with Liverpool forcing nothing more than corners and one save from Darren Randolph – which came from a long-range Lovren strike.

It’s a concern that the Reds struggled so hopelessly again in this regard and it must be corrected before it costs precious points again.

The Reds failed to pose any attacking threat at all against Bilic’s side – partly down the lack of support for Christian Benteke which played into the visitors’ hands.

With West Ham set-up deep to frustrate, the Belgian found himself surrounded behind and in front – particularly first half – and totally cut-off from play throughout the game, leaving him lonely up top where he failed to enjoy any influence on the game at all.

And nobody close to benteke who simply isn't involved enough.

The frustration of the Hammers’ defensive set-up saw Coutinho and Firmino drop deeper in order to create, rather than moving in support of the 24-year-old, who had no service as a result and only had a handful of hopeful crosses and corners slung in his direction to compete for.

The introduction of Danny Ings brought an increased amount of forward support, but with the away side disciplined and resilient from the off and the damage already done – Benteke was already well and truly neutralised – shown as he had only 28 touches in the game.

With striking options readily in reserve and Daniel Sturridge’s comeback edging closer, Rodgers may have to consider a system switch with two up front to offer support to the Belgian.

Out of position Joe Gomez exploited at left-back

The 18-year-old has been nothing short of a revelation since arriving but he endured a difficult afternoon on the left side of the Reds defence.

Up against the interchanging duo of Dimitri Payet and Lanzini who enjoyed success against the youngster, Gomez was on the back-foot from the off, and struggled to deal with the pressure from the tenacious duo with little protection from his midfield or stable cover from Lovren.

Though not directly at fault for any goal, Gomez was caught ball watching for the opener, which saw Lanzini nip-in to tap home in front of the Kop after Aaron Cresswell’s ball across the face of goal found the Argentine at the back-post.

Gomez excellent so far this season but not an attacking left back. Lacking width on left when Coutinho is narrow Milner drifting there

With the Reds needing natural width to create space centrally, the summer signing failed to provide it alongside any attacking threat, with his discomfort travelling forward on his weaker side obvious, proving a real hindrance to forward play with Bilic’s men happy to allow the Reds to play down a nonthreatening left side.

Joe Gomez made the most touches (48) of any player in the first half – it's playing right into #WHUFC's hands. #LFC pic.twitter.com/eUnpKAEIwT

Gomez has undoubtedly enjoyed a fantastic start to life at Anfield, but suffered an afternoon of torment at left back.

There was very little to be positive about at Anfield, but arguably the only thing that wasn’t a negative was Danny Ings’ cameo display.

The summer signing came on after 60 minutes for his first Liverpool minutes since joining with the Reds already down to 10 men and trailing by two, but he was bright, lively and creative in support of Benteke despite the difficult circumstances.

One positive from this loss: Danny Ings. #LFC

Instantly Ings created a chance with a clever touch for James Milner to strike at goal – an effort that was dragged wide by the skipper which he should have done better with – and just moments later, a tidy exchange with Benteke almost set the substitute in on goal for a one-on-one chance, only for Randolph to come out sharply and gather.

Ings displayed some of the underrated side to his game in only a half hour appearance which should provide Rodgers with some food for thought over his attacking selection.

FAN REACTION: “From horrible to a nightmare”

PLAYER RATINGS: Lots of 5 out of 10 performances