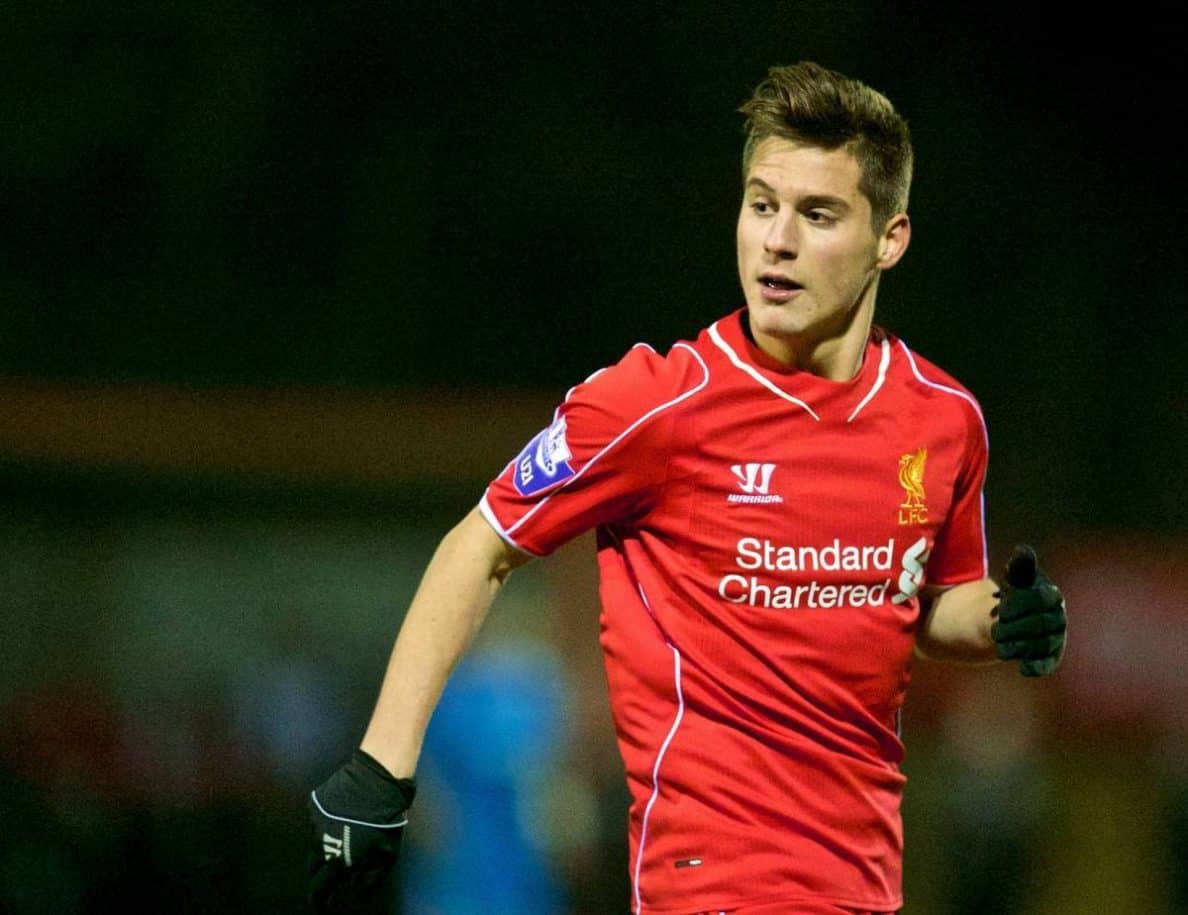 One of many exciting young forwards looking to make their breakthrough from the Liverpool academy, Sergi Canos is an intriguing talent, writes Jack Lusby. Michael Beale’s Liverpool Under-21s side is brimming with exciting attacking talents, with the Reds continuing to fill their youth ranks with the best Europe has to offer.

Eighteen-year-old Sergi Canos stands as one of the most promising.

The Spanish forward, alongside the likes of Harry Wilson, Sheyi Ojo and Ryan Kent, has shone within the Reds’ youth ranks in recent seasons.

But just who is Canos, and can he make an impact on the Liverpool first team in the future? After making a strong impression at Barcelona’s La Masia setup, Canos joined the Reds despite interest from Manchester City, Chelsea and Arsenal—such was the then-16-year-old’s potential as a young player.

Looking to emulate his footballing idol, David Villa, Canos stepped away from Barcelona in order to compete for a place at Liverpool.

This came against the wishes of the La Liga giants, who lodged a formal complaint to their FA following his move.

Liverpool gained the upper hand in their attempt to sign Canos due to their ability to offer him a contract at the age of 16, whereas Spanish clubs must wait until the player reaches 18.

As with Chirivella, Liverpool support Canos’ family following his move to England, accommodating them alongside the youngster and providing his sister with schooling and language lessons.

“I thought that it was the best decision,” he reflected earlier in 2015. “Liverpool offered me things at a sporting level that Barca didn’t.

“That is what I decided and it is why I am working hard every day. I am searching for my dream. Every time I go to Anfield, every time, my hairs stand up on the back of my neck and I get goosebumps seeing how the fans support Liverpool.”

Enamoured with the passion around Liverpool, Canos will be hoping to make an impression on Brendan Rodgers’ side in the future.

But what does he offer Liverpool on the field? A versatile forward option, Canos can play as a left or right winger or as a No. 9.

He has provided U21s manager Michael Beale with an invaluable attacking option, growing into a star player in 2014/15 following a season of transition.

In a positional sense, it is easy to see why Canos looks up to now-New York City forward Villa, who developed into one of Europe’s most clinical forwards during spells with Valencia and Barcelona.

However, Canos is best in a fluid role starting on the right flank.

Happy to drift in and support attacks as well as create with an impressive passing range, Canos has developed into a vital component in the Liverpool youth ranks.

The 18-year-old is a confident and skilful dribbler, constantly looking to take on his marker and drive towards the penalty area. Added to that his strength—hugely improved since his arrival—makes him a devastating talent with the ball at his feet.

Tall for a forward at over 5’11”, Canos is an intriguing prospect in Liverpool’s ranks, and one perfectly suited to English football.

Starting 2014/15 as a feature for the U18s saw him showcase his skills as a finisher. Canos scored an impressive hat-trick in a 5-5 draw away to Derby County, with coach Neil Critchley highlighting this performance as a marker of “good progress.”

Moving into the U21s setup full-time midway through the season, Canos scored two goals and made seven assists in 22 appearances.

One major flaw in Canos’ game, however, is his discipline.

Be it engaging in a heated on-field argument with Chelsea U21s’ Fankaty Dabo or throwing the ball to the ground in disgust at a refereeing decision against Guangzhou Evergrande, the 18-year-old must work on curbing his petulance.

Despite this, overall Canos looks to have an exciting future ahead of him, and is ahead in his development compared to many of his contemporaries—one being team-mate Wilson.

So could Canos translate this talent onto the first-team stage at Liverpool?

Can Canos Make an Impact at Liverpool? Canos’ main issue in breaking into Rodgers’ side is the wealth of attacking talent already at the manager’s disposal.

With Liverpool building a strong forward line with one eye on the future, Canos could see the likes of Philippe Coutinho, Roberto Firmino, Lazar Markovic and Jordon Ibe blocking his path for many years to come.

He could also be challenging fellow academy stars Wilson and Sheyi Ojo for a first-team place in the future.

However, he is among a select group of youth talents at Liverpool to have regularly featured in training sessions with the senior side at Melwood, and the confident 18-year-old sees this as a way into Rodgers’ thinking. [td_ad_box spot_id=“custom_ad_3″]

“It’s amazing to train here because it’s where the first team train every day and where the top players are training, and that is an unbelievable feeling,” he said earlier in 2015.

“This is a big chance for us as [the manager and his staff] trust in us and we can try to step up to the first team and that is our motivation.”

His flair, physicality and direct style of play sets Canos way ahead of many other forwards of his age, and learning from Coutinho and Firmino, as well as using Ibe’s progress as a benchmark, could see him being given a chance under Rodgers in the future.

Taking that chance, the 18-year-old could become a useful player for Rodgers as he builds his attack for the future.