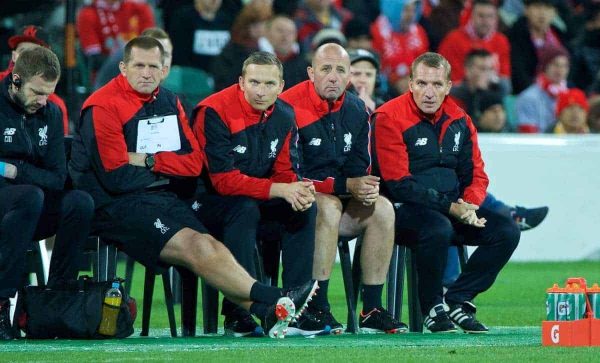 The new season is almost here and whether you’re struggling for optimism or buoyant at the thought of having something to occupy your weekend, our comprehensive preview will get you fully informed ahead of the new campaign.

There’s seven (eight if you include Divock Origi) new faces in the Liverpool squad, plus new men on the bench next to Brendan Rodgers following the sackings of Colin Pascoe and Mike Marsh and appointments of Sean O’Driscoll and Gary McAllister.

There’s a new club captain a new No. 7, No. 9, No. 11 and No. 2- it’s been another huge summer of overhaul for the Reds’ squad. At least our squad numbers are starting to look better already!

The only business left to be done is to ship out the unwanted trio of Jose Enrique, Fabio Borini and Mario Balotelli, who are currently training separately at Melwood.

Over at Anfield itself, there’s a huge new roof structure that dominates the skyline for miles around. Fans arriving at the first home game against Bournemouth a week on Monday will see huge changes from the last home game back in May.

Speaking of Bournemouth, they’re one of the three newly promoted clubs and appearing in the Premier League for the first time.

There’s Premier League returns for Steve McClaren, Claudio Ranieri and Slaven Bilic, plus over £500 million spent in the transfer market.

We have seven articles to get you up to speed ahead of the season (at the bottom of each article you’ll find links to the next one to read).