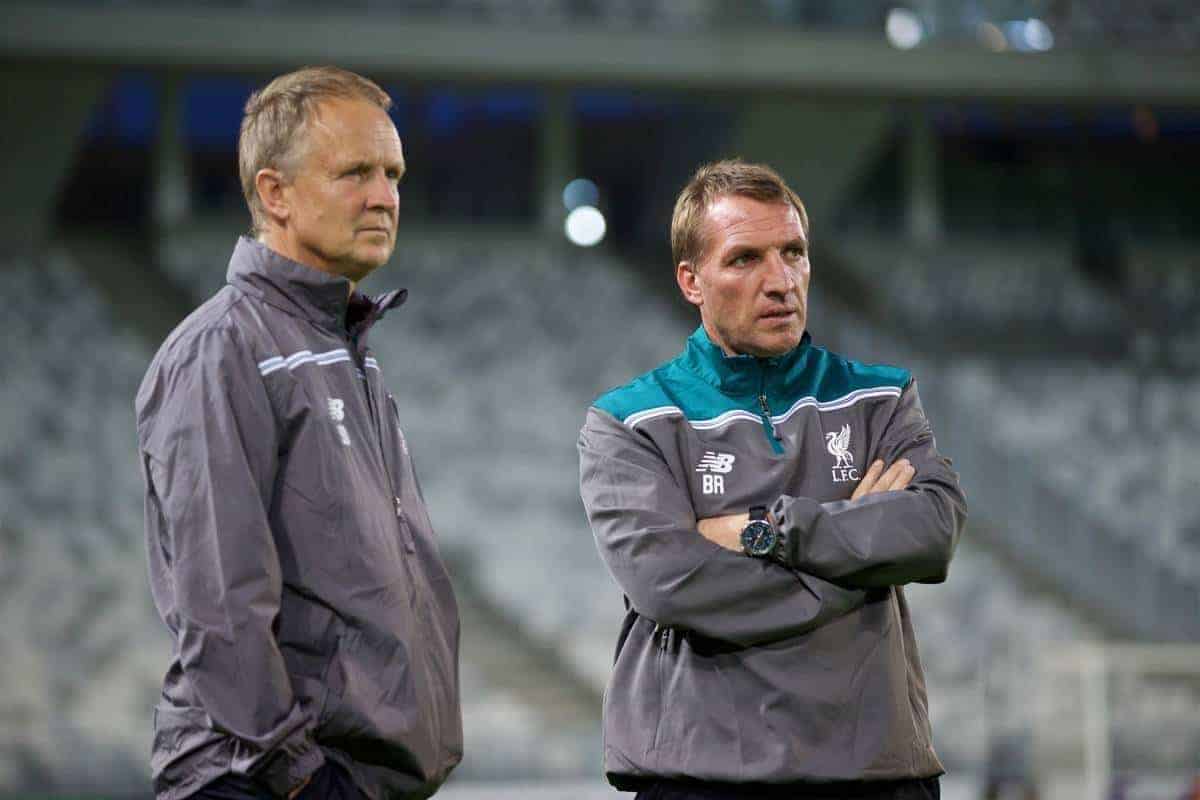 Brendan Rodgers is a man in need of a plan right now, writes Thomas Bolton as he provides five things that the Liverpool boss should use the Europa League for.

With careful thought the Northern Irishman can get the most out of the notoriously taxing Europa League to play people into form, work out a winning formation and give youngsters vital experience.

Here’s five ways the under-fire Liverpool boss can ensure he and his squad benefit from the competition and not find it a hindrance.

1. Give his first team outcasts a chance through Europa to regain first team status

Rodgers has considerably talented players not being given a solid chance in the struggling Liverpool first team. Too often players in the past few seasons have come and gone through the Anfield gates without being given much of a chance to make an impact.

Tiago Ilori, Ousamma Assaidi, Luis Alberto, Samed Yesil and Suso are just a few names that made 25 or less appearances (even Fabio Borini only made 25 appearances). One way to give players outside of the first team a real incentive to play well and place pressure on the underperforming XI is to offer first term contention to Europa overachievers.

While it’s a pity that Lazar Markovic cannot make use of this avenue to stake his claim, forgotten defenders Mamadou Sakho and Alberto Moreno could remind Rodgers’ of their presence and talent. Rodgers should reward strong performances from either of the duo or even the ageing Kolo Toure with the possibility of a return to the first term, which is in serious need of an injection of form.

The marginalisation of Sakho has caused much debate among fans (admittedly a pretty one-sided debate). The gangly Frenchman, when injury free is an accomplished centre-back and his distribution has markedly improved through the seasons he has been at Anfield. He regularly passes the ball forward which bucks the annoying trend of Martin Skrtel and Dejan Lovren sending the ball back to the feet of Simon Mignolet at the slightest hint of pressure.

Sakho has not been given a chance this year despite Euro 2016 looming and the assertion by many fans that he is a much tidier and more reliable centre-back than Lovren. Not only does Sakho have clear talent and a desperate need to force his way back into Laurent Blanc’s plans he also boosts a considerable CV of European experience.

Sakho was captaining PSG to Europa League victories 5 years ago aged just 20 – back when Lovren was still breaking through for Dinamo Zagreb. Sakho has played 24 European games, but only two in the last few years at Liverpool.

3. Approach the competition in the right way

A contentious point as the Europa League is a fickle mistress. Do well in it and receive little kudos as it is widely perceived as a “lesser trophy” but fail to perform and the pressure surrounds from all sides.

Also there is the effect of the “continental hangover” to consider. Rodgers should treat the Europa League for what it is; a distraction with a very large silver lining.

If he keeps his clear first teamers away from the competition (eg Coutinho, Milner, Henderson, Skrtel and Benteke) he can avoid the vital components of his squad from being affected by trips to France and Russia.

But on the other hand the competition needs to be taken seriously enough to progress, and can provide great experience for players such as Moreno, Emre Can and Jordon Ibe.

Also Rodgers, especially in the group stage can experiment tactically, trying his beloved 4-3-3 and other tactics he has been contemplating and hopefully find a winning mix to bring back to the Premier League.

The competition offers Rodgers a technical “sandbox” without much at stake and good experience for his players not in touch with the first team. He must see it as useful without being too high a priority. Hopefully all benefit from it. (Ed note: Rodgers is expected to play 3421 in Bordeaux tonight).

4. Blood Youth and bring players back from injury through the Europa League

The Europa League could also provide a springboard for talented players such as Ibe, Can, Divock Origi and Danny Ings to play into form away from the glaring Premier League spotlight. Ibe and Origi especially are younger and more raw talents and early continental experiences against cultured opposition should impact positively on their development and hopefully allow them to develop a winning mentality.

Whilst the Europa League is considered to be a ‘lesser league’ Bordeaux are six-time Ligue 1 winners, Rubin Kazan have been consistent performers in European competition as well as the Russian Premier League and FC Sion won the Swiss Cup earlier this year.

All three teams are successful to some degree and getting consistent game time against that calibre would be beneficial and present an opportunity for players such as Ibe, Origi and Joao Carlos-Teixeira.

Furthermore, the competition’s games would provide good chances for players such as Jon Flanagan, Joe Allen and Daniel Sturridge to sharpen themselves ready from Premier League action in the latter stages of their recovery from injury.

All three would be hoping for a return to the first XI but given Flanagan’s lay off, the crowding of the midfield and Sturridge’s recent patchy form none of the trio could expect to walk back into a settled team and the Europa League could prove a good chance to show they deserve to be there.

5. Know when the competition’s usefulness is at an end

Similar to approaching the Europa League in the right way, Rodgers must understand that unless winning the competition becomes a more serious prospect there will be a time where he must choose to prioritise the Premier League.

Rodgers must understand the effects that playing a long away trip to Turkey or Russia and losing would have on a group of players who must then play a few days later to try and secure three vital points in the Premier League.

Unless the Reds reach the quarter-finals, Rodgers must be prepared to rest his Premier League first team if an important domestic game and a latter game in the European competition occur in close proximity.

Whilst Champions League can be secured through the Europa the competition can also be notoriously taxing and Rodgers must be weary of that.