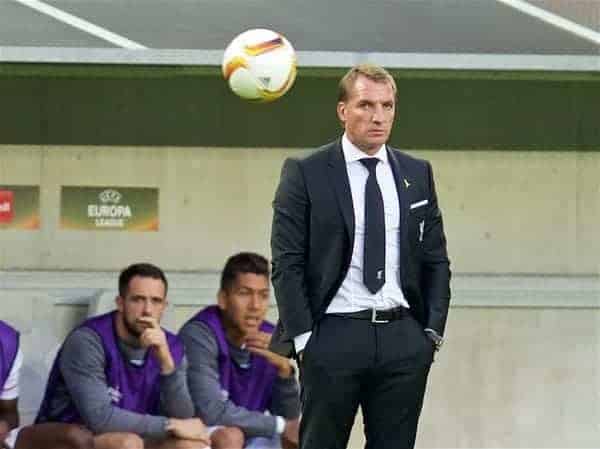 There were plenty of positives for Liverpool to take from their 1-1 draw with Bordeaux in the Europa League, writes Ben Twelves. The deadlock in an uneventful clash was broken with Adam Lallana handing the Reds the lead with a goal of real class after 65 minutes, before the home side equalised courtesy of Jussie Ferreira Vieira’s scrappy goal after he pounced on some hesitancy in the Reds defence.

It was a mixed night for Liverpool with some negatives and positives coming out of the encounter, and here are the talking points from the clash.

It was a memorable night for a number of Liverpool’s talented youngsters, with Jordan Rossiter, Pedro Chirivella and Cameron Brannagan all playing their part in the European opener.

Rossiter – in for his first start – provided a destructive but composed figure in the middle of the park alongside Emre Can, before injury to Kolo Toure saw the average age of the team drop to just 21.7 when fellow academy graduate Chirivella joined the Scouser in the middle where he also showed his quality, as Can dropped into the back three.

Slowly but surely, Rossiter and Chirivella are giving Liverpool more of a foothold in midfield. Both youngsters acquitting themselves well.

The duo more than held their own for the duration they formed the midfield pairing, with Chirivella impressing with some tidy and intelligent distribution alongside Rossiter, who broke up play effectively and used the ball well too, before being replaced by highly-rated Brannagan.

Liverpool’s second debutant enjoyed less time in the action but was tidy while involved – though could arguably have fingers pointed in his direction for losing his man for the equaliser –  but with Rodgers set to use the competition to blood young prospects, all three showed the manager their readiness to feature.

Adam Lallana was the man to provide the magic for the Reds to take the lead, but he endured another frustrating night overall in France.

The 27-year-old was non-existent before his 65th minute strike, contributing little to the Reds attack in or out of possession, and he failed to provide any link-up play with Philippe Coutinho or Divock Origi in a completely ineffective first hour in which he wasted a real opportunity to strike at goal when released by Jordon Ibe.

He's really good at times Lallana. It's the other times that are really frustrating.

But Lallana does have undoubted quality – which he doesn’t demonstrate enough – and he showed it with a goal of real class as he slotted inside the far post after nut-megging his marker to put Rodgers’ side ahead, in a game that had seen little attacking threat from the visitors – partly down to his own ineffectiveness.

The England man then came to life after the goal and was visibly more confident thereafter, linking nicely with Coutinho on occasion and providing a far more threatening option in attacking midfield but as always, he must replicate it with far more regularity.

Mamadou Sakho was one of those handed his first minutes of the season in France, and the Frenchman didn’t disappoint while wearing the captains armband.

Sakho – playing on the left of the three-man defence – turned in a solid display, defending strongly on the front foot throughout – shown as he won three tackles, two interceptions, four headers and made seven clearances.

His trademark distribution was on full show too with his passing providing the catalyst for a switch from defence to attack on more than one occasion, while also creating a chance and registering a 90% passing success rate.

The defender – who captained former club Paris Saint Germain at the age of 17 – marshalled the defensive line well, keeping a tight and well drilled unit in check, and he showed his maturity and experience at the heart of the back-line.

Would think Mamadou Sakho will be very unfortunate if he doesn't keep his place against Norwich after that performance.

As assured, solid and composed as always, it was a hugely positive performance from the incoming 25-year-old, and Rodgers has a big decision to make over whether to keep him in place for Sunday’s vital clash.

Rodgers must learn from post-Real Madrid selection after promising displays

Promising performances in that fixture against Real Madrid counted for nothing as Rodgers selected his ‘first choice’ options the following game and slumped to defeat – he must not repeat the same mistakes this time round.

The displays of Toure and Lucas Leiva on that particular evening in the Bernabeu were completely ignored by the Reds boss, who stuck with the already decided make-up, and it proved costly with little changing performance or results wise with first choice options, demoralising those overlooked in the process.

Remember when the 'reserves' played well at Real Madrid, then they all got dropped for the next game… Sunday should be interesting.

Almost a year on, and a similar feat has played out – this time Rodgers must not make the same selection errors.

Sakho in particular impressed in a much-changed side, and with Martin Skrtel and Dejan Lovren continuing to struggle, Rodgers must think long and hard before sticking with the dodgy duo, while Alberto Moreno also impressed down the left and his natural attacking threat could be a welcome addition in a game the Reds must win on Sunday.

Rodgers has some big decisions to make over Sunday’s selection after being provided with some real positive performers, but he must learn from previous mistakes and make the right calls.

It’s a competition that firmly splits opinion throughout the fan base with regards to its importance, but the Europa League could provide Liverpool with a welcome distraction.

The chance the tournament provides for young players coming through the system at Anfield is huge, with the opportunity for first team minutes on the European stage, and the for those out of the first team picture, it also provides the chance for welcome match action, as in France.

Rossiter, Chirivella and Brannagan the #LFC Academy graduates on the pitch. Not just token minutes, either – great experience for them.

Liverpool may not be the tournament favourites, but if momentum can be built up throughout he group with those regularly likely to feature, there is a genuine possibility of improving on the last 32 round exit that has materialised in each of the last three Europa campaigns.

It was a good point in France with an inexperienced side, and with FC Sion to come at Anfield next up, a positive result against the Swiss club would position the Reds well for the rest of the group stage.

A v. young & inexperienced #lfc side, with a pair of 18 year old centre midfielders, gets a point away in Europe. It'll do.