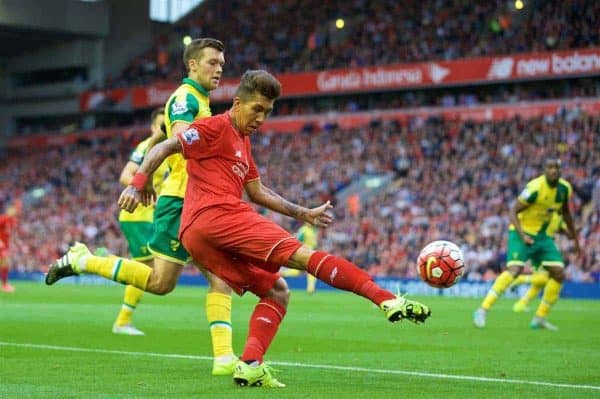 Firmino, Lallana and Rossiter to start – How Liverpool could line up vs. Carlisle

Liverpool are winless in their last five matches in all competitions after the weekend’s stalemate with Norwich – and with pressure increasing at a rapid speed on the Liverpool boss, the League Cup third round clash offers a real chance for a return to winning ways and small confidence boost ahead of a huge game against Aston Villa on Saturday.

Liverpool have made cup fixtures against lesser opposition anything but straightforward exercises in recent times – Middlesbrough, Bolton and Blackburn all took the Reds beyond 90 minutes and to replays while Wimbledon were just scraped past last season.

Rodgers’ men must not underestimate the visitors despite their mid-table position in the fourth tier, with Curle’s men already having overcome two side’s in league’s higher than themselves including seeing off recently relegated QPR away from home in the last round.

Rodgers has the luxury of picking from an “almost full squad” in the words of Gary McAllister, and though the first-team coach admitted in his pre-match press-conference that “there will be changes”, a strong match-day 18 will be named for the tie.

Jon Flanagan, Jordan Henderson and Christian Benteke – who is set for an MRI scan on a hamstring problem – won’t be involved.

Adam Bogdan could make his first Reds appearance, while Dejan Lovren and Joe Gomez could be restored to after sitting out the Norwich draw, though Rodgers could name the same defensive personnel in an attempt to build consistency.

Joe Allen’s return to fitness could see the Welshman return to match action, and with the clash a chance to include some of the club’s young prospects, Jordan Rossiter could feature after starting in Bordeaux last week, with Joao Carlos Teixeira, Pedro Chirivella and Cameron Brannagan all potential inclusions too.

Jordon Ibe, Adam Lallana and Roberto Firmino all offer available attacking midfield options, with all three having started on the bench on Sunday.

In attack, Daniel Sturridge could be handed the chance to build on the hour completed against Norwich as he steps up his return, while Divock Origi could come back into the fold, but Danny Ings will be hopeful of keeping his place after his goal-scoring display.

A relatively strong team is set to be named for the tie, but Rodgers made eight changes for the Europa League game in Bordeaux last week and a similar amount is likely here.

McAllister hinted at sticking with three at the back for the third game running, with the choice then available to play with one or two strikers in attack.

With changes set to be forthcoming and strong team to be selected, Rodgers could recall Gomez, Lovren and Toure to form the three-man defensive unit ahead of Bogdan to give Simon Mignolet a night off.

Ibe could then come back in to play at right midfield, with in-form Alberto Moreno on the opposite side, allowing Emre Can and Rossiter to make up a youthful but talented central pairing.

Having entered as second half substitutes on Sunday, Lallana and Firmino should be handed starting berths on Wednesday to stake their claim for a place in the XI against Villa at the weekend, and the duo should operate behind Ings who should be rewarded with a start for his impressive second half performance.

Those changes would see Liverpool’s starting team look like this at Anfield:

However, Rodgers could opt to revisit the 4-3-3 formation for the cup clash with the ability to deploy an equally strong XI.

Mignolet could stay in goal with the need to bounce back with a composed display after Sunday’s error, and Nathaniel Clyne and Joe Gomez could fill the full-back slots alongside Toure and Lovren for the four man backline.

Lucas Leiva can continue in his defensive midfield role ahead of the back four, with Rossiter and the returning Allen the perfect combination to play ahead of the Brazilian to make up the midfield three, allowing Can a rest.

With Benteke likely to be struggling for Saturday’s clash, resting Ings could be a wise move, which would allow Origi to spearhead the attack with Ibe and Lallana playing in support of the Belgium striker.

The switch of system and personnel would see the Reds look like this come 8pm kick-off time:

A win over Carlisle is not going to change anything drastically, but returning to winning ways with a dominant performance could provide a much needed confidence boost for a team struggling for form ahead of a vital match against Aston Villa on Saturday.