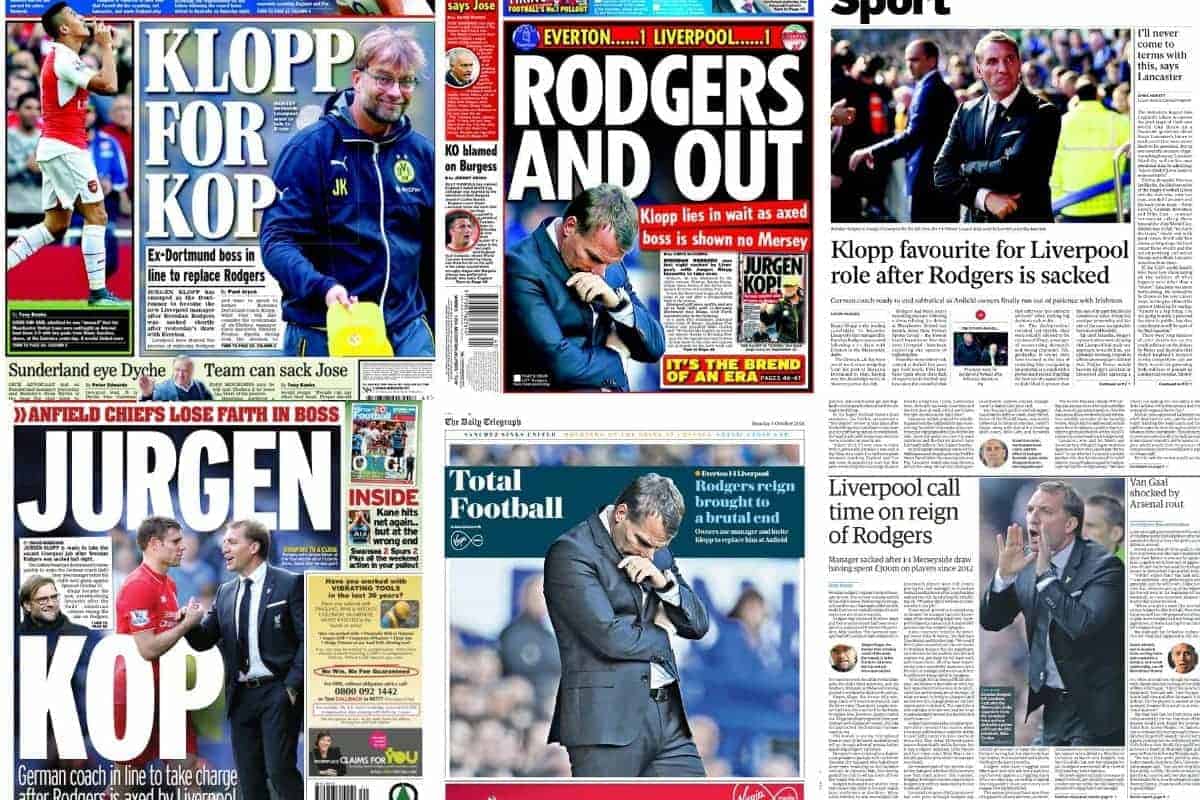 The morning after Brendan Rodgers’ dramatic sacking as Liverpool manager, we round-up the best media reaction to the news.

There had been a growing feeling that the end was nigh for Rodgers, and the news of his dismissal was confirmed by the club on Sunday evening.

The 42-year-old took charge in June 2012, but having come agonisingly close to winning the Premier League in 2013/14, he went dramatically backwards from that point on.

Rodgers is far from a bad manager, and may well go on to have an excellent future in the game, but it felt like the right time for a change at Anfield.

Here is how the media reacted to arguably the biggest story in English football so far this season.

I don’t like the fact Liverpool are getting rid of a manager after just eight games but when you look at Brendan Rodgers’ time in charge as a whole, he was given a fair crack of the whip.

Rodgers had four very winnable home games recently — newly promoted Norwich, League Two Carlisle, relegation battlers Aston Villa and Swiss side Sion — and he only won one. There were boos after three of them and the decision was probably taken because of that poor run.

After a disappointing campaign last season and a lot of money spent in the summer, Rodgers will have known that his team needed to come flying out of the blocks this season but they didn’t and he should have been fired in the summer or given 20 or so games to get it right this campaign.

From my experience, once a manager starts to head in a downwards direction at Liverpool, he doesn’t pull it back. Roy Evans should have gone in the summer before he was let go and Gerard Houllier should have left the season he finished fifth. Once it’s slipping away and the fans have turned, no manager has been able to turn things around at Anfield.

Carragher talks a lot of sense.pic.twitter.com/LmPzwnZ6tG

Dion Fanning of the Independent feels Rodgers is a talent, but also complicated things with his over-the-top, hyperbolic demeanour:

Rodgers has great gifts as a coach but he also possessed an ability to make football appear to be about something other than what it is about. Of course, managers need to have their philosophy and they must have a process but there must also be an urgency about winning and that was something lacking from Rodgers, even before he became Liverpool manager.

Instead things that weren’t outstanding became outstanding. Ordinary performances were described as something else and the ongoing failure to deal with defensive problems became some kind of curiosity that he could do nothing about, a failing that would have to be tolerated like leaving the toilet seat up or forgetting to put the bins out.

Rodgers has great talents as a coach and Steven Gerrard speaks highly of his man-management in his current autobiography but he was a manager, who more than anything, rode the wave.

Liverpool off pace last season and started off looking like might be the case again this season.Didn't expect it today but not too surprised

Andy Kelly of the Liverpool Echo felt Liverpool’s ambition dropped under Rodgers, but blames FSG just as much for that:

(FSG’s vision) has been undone by their own lack of ambition and decision-making.

A young group of players increasing in value, experience and talent only delivers if you hold on to those assets for a long enough period.

There was no lack of mitigation but ultimately FSG were forced to cash in £75m on Luis Suarez and £49m on Raheem Sterling because neither player truly believed in their vision for the club’s future.

What FSG have most disappointingly done, for many, is to water down expectations of where Liverpool Football Club is capable of going.

The owners gave Rodgers plenty of money yes – though net spend remains well below the fanciful £300m you’ll see thrown in the air – but the Reds still remained unable to compete at the absolute top end of the market. Steven Gerrard texts buy you only so much goodwill.

Rodgers himself went from “Make us Dream” to the dull reality of “fifth is par”.

Paul Joyce of the Express explained that FSG clearly lost faith in Rodgers because of the way the team were playing, not because of their league position:

That FSG lost faith Rodgers is the man to eke out that improvement speaks volumes, especially when the strike partnership of Christian Benteke and Daniel Sturridge, upon whom the manager would have banked on carrying the team forward, has been in tandem for just 45 minutes this term.

Rodgers’ managerial mantra is that he makes players better.

FSG are no longer believers, seeing yesterday’s 1-1 draw, after Danny Ings‘ goal was cancelled out by Everton‘s Romelu Lukaku, as evidence to support their opinion this is a squad not currently punching its weight.

In many ways, Rodgers’ last stand neatly encapsulated what his reign has become.

A point against in-form neighbours was not a dismal result, but the performance remained an uncomfortable fit. Overall, it betrayed a lack of progress.

He departed Goodison Park insisting he would need time to rebuild. A little over an hour later, his time was up.

Arsenal manager Arsene Wenger spoke of his sadness at the news:

I’m always sad when that happens as I think he is a quality manager. Unfortunately the pressure is always bigger on the managers.

He was very unlucky to not win the Premier League. He was closest certainly to winning the Premier League of all the managers that have been working for the club, but that is the way it goes now and I wish him good luck. I’m sure he will find a job again.

Former Newcastle and England man Alan Shearer felt a lack of progress was evident at Anfield:

No-one wants to see a manager get sacked but the bar was set when the owners sacked Kenny Dalglish for finishing eighth, getting into two cup finals and winning one of them. From there to now I don’t really see much progression.

Looking from the outside now, I don’t seen an identity, I don’t see who their best players are, what the plan is or what the best system is. So from that point of view I was pretty confused.

From the beginning of this season, with his two coaches going I thought Brendan was a dead man walking. As soon as he was going to have a bad run I felt the inevitable would happen.

Another ex-England striker, Ian Wright, felt differently on the matter, however:

I am shocked. He was meant to be the new kid on the block but he had run out of time.

It is unfortunate for him but I don’t think Liverpool owed him that time. They gave him a lot of money to spend.

The club are nowhere near where they want to be. A club of Liverpool’s size do not need to answer to anyone.

Finally, Neil Atkinson of the Anfield Wrap deservedly heaped praise on Rodgers for Liverpool’s brilliance in 2013/14:

Rodgers brought the best out of both Suarez and Sturridge, he gave them able support in Gerrard, Henderson and Sterling from whom he also coaxed the very best and he committed wholeheartedly to an attacking approach which allowed all to shine and Liverpool perpetually improved.

Rodgers created something which could be got behind. Liverpool were about something in a way they arguably hadn’t been since September 2009.